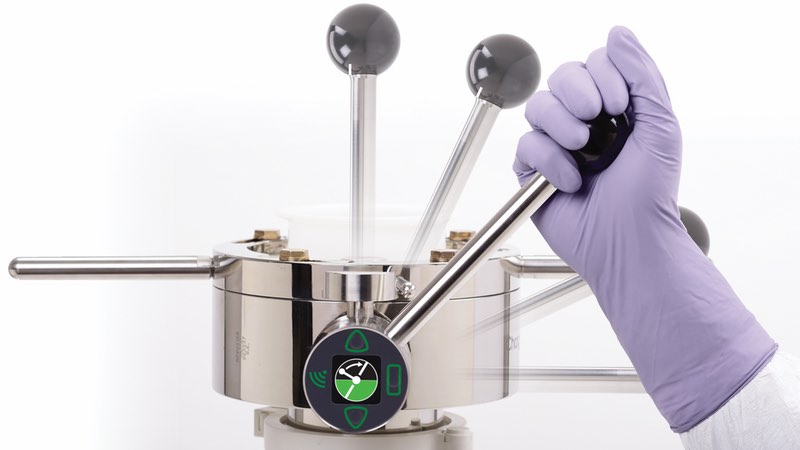 The production of solid dose drugs is a complex, multi-stage process. Whether you’re using a well-established solution like an isolator or rapid transfer port (RTP), or a more versatile solution like a split butterfly valve (SBV), or even disposable technology, materials must be transferred from one process to the next: from dispensing to granulation on to blending and then to compression and coating.

Closed transfer valves, such as SBVs, are increasingly replacing traditional open transfer techniques currently available on the market, because it reduces the risk of cross-contamination and airborne dust particulate, ultimately protecting the operator’s safety.

Such technologies are made up of a passive section attached to the mobile container and an active unit attached to the processing unit. When combined during powder charging, the units form a valve that enables contained and efficient materials transfer.

SBV technologies are available in sizes suited for pilot-scale development through to commercial production with containment performance achievable down to nanogram levels. However, there are many factors that affect performance such as installation, functionality, condition of the equipment, and the process and maintenance of the device.

A key difficulty in powder transfer involves taking material from one closed system into a separate closed system, which may or may not be compatible. Factoring the accessibility, batch sizes and containment performance requirements, it’s important to ensure that the design specifications will meet these process conditions and that equipment materials are compatible.

Whether dispensing an API from a containment isolator, or transferring a pre-blend via IBCs through a milling process, or even charging the final blend to a compression machine, the challenge is always the same: to maintain containment integrity.

Before a manufacturer can implement a new control device within its process, performance testing is generally assessed in line with the International Society for Pharmaceutical Engineering’s (ISPE) SMEPAC (Standardised Measurement of Equipment Particulate Airborne Concentration) guideline for assessing its particulate containment performance. 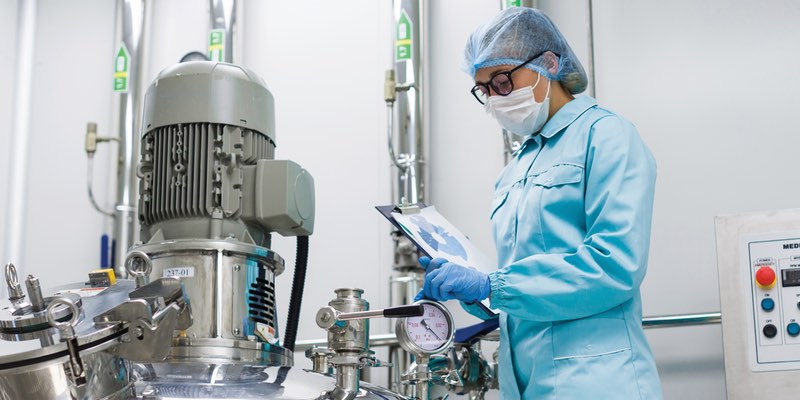 SMEPAC is the industry standard guide for containment performance testing and it serves users with how to perform analysis and compare different technologies. It’s also used to directly influence the selection process of containment devices and has been adopted by containment equipment manufacturers to evaluate and benchmark the performance and promotion of their equipment capabilities.

The guidance only demonstrates how a containment device performs in theory. SMEPAC testing in an environment as close as possible to the real-world is still necessary. Despite these drawbacks, it is widely accepted that using SMEPAC to identify and adopt the correct specification of contained transfer equipment ensures good practice.

The type of placebo used influences the results obtained. SMEPAC suggests a variety of surrogate powders (paracetamol and mannitol), but as APIs, they cannot be handled within general equipment manufacturing facilities.

Consequently, the most commonly used placebo is lactose as there are a variety of micronised lactose grades. It is important to ensure that the best match to the API is considered as each has varying particle sizes and bulk densities that will, in turn, affect the levels of detection, airborne characteristics and consequential results.

Preparation and initial dispensing of the placebo batches is a critical operation. Contamination of the outside surfaces of the bags or bottles within which the surrogate is being pre-dispensed will essentially compromise the test, even if the process containment equipment itself might be successful. Careful consideration needs to be taken to wipe down.

Equally, the storage of the dispensed batches is something to bear in mind as the differing temperature, light, humidity and length of storage will all have a bearing on the final result.

There is also the possibility of testing equipment with the same specification to show differing results in the same test due to the considerable differences in sampling methods. Equally for differing sampler devices used under the same test conditions —even when using the same placebo— will result in significant variability in the sample result. Understanding how each has been tested and how the performance results have been obtained also helps manufacturers to interpret the results.

SMEPAC guidance is that the masses are intended to fully coat the exposed seal and operating surfaces. So, the very nature of providing a suggested weight range means that testing devices with volume variation will lead to inconsistent results. Would we expect consistency in performance results, for a 100 mm transfer device, tested with 0.5 kgs, compared to another tested with 5 kgs? Both are within the suggested weight range of the guide.

“Performing less than three test runs can result in uncertainty of the accuracy of data and significant statistical variability”, the guidance states. Of course, multiple transfers will offer greater assurances and improve statistical understanding of the capabilities of the containment equipment. The more transfers are undertaken during testing, the greater distribution and continuity of results will be obtained, giving confidence to the user.

The samplers used in each analysis vary greatly with a majority of suppliers employing a specific sampler. However as other suppliers are using other samplers around Europe and ROW, this leads to different operating parameters and eventually leads to a varied range of results.

The SMEPAC guide does make reference to the requirement for both the filter and cassette parts to be analysed for particulate content. It also recommends the recovery of all potential material from the sampling device should be achieved.

It’s possible to obtain data based on the particulate captured only by the filter component, disregarding any particulates which may be present within the cassette housing. For example, a test was carried out back in 2015 on a containment transfer device. Results were supplied for the same test, but one was based on a filter only while another combined the additional particulate count from the cassette housing. There were clear differences in the results obtained, and this proves the importance of understanding how samplers are analysed and the information clearly presented within the containment performance report.

Most performance results will be obtained from the analysis of combined filter and cassette arrangements, however, there will be test data still available and present on promotional literature covering only filter analysis. More research into containment figures must be done to check the data and criteria by which it has been produced.

Effective maintenance and operational performance monitoring are also important parts of any containment strategy. When using SBVs, wireless technology record usage provides an indication of the health status of the valve. This gives safety and compliance teams the usage information they need to make informed decisions.

The modular nature of wireless monitoring technologies means that changes to manufacturing set-ups can be easily accommodated. It is also a more economic approach that makes monitoring more convenient.

It’s difficult to counter the risks associated with human intervention. Containment needs to be achieved while not affecting productivity and operation. Validation testing must, therefore, reflect the operator intervention to ensure that the containment device is tested accordingly. However, performance can be impacted by operator technique, such as surface wipe downs, increasing variability even further.

Containment needs to be achieved while not affecting productivity and operation

With the increasing toxicity levels of HPAPIs, there is a lessening acceptance of high levels of visible residue, so extraction methods to recover as much of the potential airborne particulates have been developed.

Higher containment performance levels can be achieved by adopting these simple enhancement engineering controls and the SMEPAC guide offers a general method on how to recover particulate from a quantified surface area.

Swabbing from a 100 cm2 surface area with the use of a single pre-wetted swab is the general practice used to recover total visible residue.

But what if there are high levels of residue and the single swab eventually becomes heavily loaded: do we use additional swabs? If so, how many? How can we be sure that the total residue has been recovered? Or, do we end up smearing the powder with the wet swab and leaving it behind? Comparison of swab analysis data for similar containment devices where a single swab has been used vs. multiple swabs can lead to a large differential in results and interpretation.

Decontamination and cleaning of process equipment, ranging from milling through to compression stages, also needs to be carried out in a contained manner. Washing devices can be integrated with SBVs to assure containment is maintained during this washing phase.

With the growing adoption of disposable technology, many manufacturers are looking to this as a low-cost alternative to traditional containment equipment. Benefits include the reduction in manual handling contamination and washing and cleaning validation activities.

But what about the containment performance of the technology? Disposable SBV technology is now possible within OSD manufacturing and therefore the achievable performance must be equal to its re-usable equivalent.

Achieving containment in the modern pharmaceutical manufacturing environment is a challenge. Integrating disparate technologies provided by different suppliers into a contained production line is a highly complex task. However, valve-based engineering controls to create common interfaces between different technologies can provide a cost-efficient and flexible means of establishing a contained environment.

Using wireless monitoring, manufacturers have an automatic and reliable method of understanding the health status of the device, allowing them to better control risk and ensure both the consistent system integrity and the safety of employees who work with potentially hazardous APIs with minimal compromisation.

N.B. This article is featured in the June 2019 issue of Cleanroom Technology.
The latest digital edition is available online.