The Fraunhofer Institute has created a cheaper alternative to the permanent fixture. The CAPE cleanroom can be set up on any flat ground with limited exposure to the elements 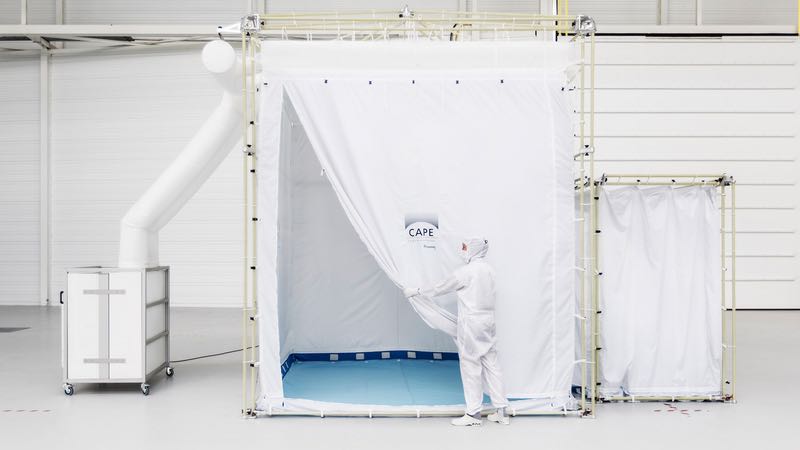 If you’ve ever been camping you will know how hard it is to keep the inside of your portable home clean. CAPE is a transportable, tent-like cleanroom facility that has taken this concept to new levels. Developed by researchers at the Fraunhofer Institute for Manufacturing Engineering and Automation, the mobile facility can be installed both indoors and in unexposed outdoor locations.

The product was inspired by a project with OHB System, a player in the European space industry and was first used in an ISO 5 clean room at OHB Space Center “Optics & Science” at the end of 2017. The result was a product that provides manufacturers with a transportable, contaminant-free environment that they can use to achieve air cleanliness standards in compliance with ISO classes 1 through 9.

Serving as a “cleanroom on demand”, CAPE is applicable for any industry needing to keep the production process free of contamination and yet not needing a permanent sterilised facility that would be a large investment for limited use.

To build and maintain a cleanroom is an expensive endeavour, with many companies not willing to make the commitment to such an investment. Dr Udo Gommel, Head of Fraunhofer’s department of ultraclean technology and micromanufacturing noticed that this left an opening in the industry for a more temporary solution, saving companies a lot, not just in construction costs but in running costs when the cleanroom is not in operation.

Companies can set up CAPE in their production halls or even outdoors, provided that the facility is placed on solid ground and that there is sufficient protection against the elements.

Fraunhofer is able to tailor these “cleanrooms on demand” to the specific requirements of the individual customer and their production process, offering a range of designs, shapes, and sizes – with or without floor, for instance. Moreover, CAPE can be integrated into existing production zones within a manufacturing operation without the need for any structural modifications.

Different sizes are suited to different applications, with the smallest size available being 30 sqcm for processes that only require very limited handling room, such as soldering.

CAPE has walls made out of special low-outgassing, washable, and sterilisable fabric that can be lowered from the ceiling like a mosquito net or built from the ground up.

The fabric cover is attached to a double frame made of lightweight carbon composite tubular segments, with aluminium connectors that lock into place without tools.

“We can set up the 11 x 12 x 7 m facility in one to two days. Compare that with a conventional cleanroom of equivalent size, and you would need one to two months,” says Gommel.

Although modular cleanrooms have brought this one to two months down to around the same time as the CAPE, as they are a hard construct the transport of them is far more complex and expensive. CAPE, by comparison, is transported in a sturdy aluminium box that can even be sent by air freight. This adds additional saving to the cost of transport.

The mobile cleanroom can be assembled quickly without the need for tools or other aids, eliminating material costs and saving time compared with its modular counterpart.

The researchers at Fraunhofer have developed their own ventilation system to ensure a sterile production environment.

“Our air distribution solution, complete with filter system, ensures homogeneous flow distribution and directed flow guidance. That’s what sets us apart from other systems on the market. CAPE’s fabric cover is permeable, non-outgassing, and electrostatically conductive, ensuring an even radial flow of air from the inside to the outside. By manipulating the relative air pressure and reversing the pressure gradient, we can safeguard either the interior of the tent or the zone around it as we choose,” explains Gommel.

Due to its adaptability, there is potential for this “cleanroom on demand” to be used in sectors as diverse as chip manufacturing, medical technology, the food industry, satellite assembly, and even the automotive industry, where it could be used in the manufacture of battery and fuel cells.

“CAPE can even be used in disaster zones, providing a clean and sterile environment in places where there is no other operating theatre available,” says Gommel.

The institute have showcased the CAPE at many shows. The next chance to catch it in action will be at the Hannover Messe from 1-5 April 2019 for the smaller-size CAPE system.