In 1972, the ICCCS was founded in Zürich, so it was fitting that 40 years on, delegates from around the world revisited the Swiss city to hear the latest developments in cleanroom standards and operation. Susan Birks reports from the conference.

The International Confederation of Contamination Control Societies (ICCCS) elected to hold this biennial event in September in Zürich. Hosted by the Swiss Contamination Control Society (SwissCCS) – formerly the SRRT – it was held at the Swiss Federal Institute of Technology ETH Zurich. This prestigious seat of learning has brought forth 21 Nobel Prize winners, and the delegates were warmly welcomed by Professor Jérôme Faist, president of the SRRT Quantum Optoelectronics Group, at ETH Zürich’s Department of Physics.

Each day began with a keynote speaker who looked to the future development of cleanroom technology and in each case gave an overview of innovative solutions being adopted by different sectors (electronics, automotive, medical, life science and astronautics) for ensuring the complex technologies and products being introduced are contaminant-free. In many cases, these new technologies require a paradigm shift in terms of both scale and thinking.

The first keynote lecture, presented by Udo Gommel and co-authored by Guido Kreck, both of the German Frauenhofer IPA’s department for ultraclean technology and micro-manufacturing, set the scene.

Gommel highlighted the growing importance of cleanliness across a range of industry sectors and suggested that there was room for cross-fertilisation of ideas across these different sectors.

Historically, it was the challenging particulate and outgassing contamination levels required by the semiconductor industry that meant for many years this sector led the science of cleanliness, but now many other sectors are pioneering new cleanliness levels and practices, he said.

In pharmaceutical production, the cleanliness of facilities has become strictly regulated. But, despite extensive use of contamination control technology, of the 243 recall campaigns initiated by the US Food & Drug Association (FDA) between 2001–2011, 64 (26%) were because of cleanliness issues, and this is an upward trend, says the FDA.

Meanwhile, the cleanliness validation (inspection of the cleanliness of products, instruments or other surfaces) in the medical device environment lags behind, said Gommel. Methods for cleaning or sterilisation are validated using purely qualitative approaches, such as visual inspection. Furthermore, quality assurance is often limited to compliance with standardised processes, rather than inline inspections to monitor the cleanliness or sterility directly.

It is worth thinking “outside the box”, he said, as there are now techniques that provide new approaches to conducting quantitatively cleanliness validations of the most critical contaminants (abiotic and biotic particles, thin-film contamination such as lubricants from process tools and fingerprints) even on complex-shaped products.

Space exploration, meanwhile, combines the challenging cleanliness requirements of the semicon and pharma industry to comply with the planetary protection programme, whose aim is to preserve planetary and terrestrial conditions by ensuring contamination does not travel in either direction with the spacecraft. In addition, an extreme level of cleanliness is also required to fulfil the challenging requirements of durability, reliability and performance of satellites and spacecrafts under the stressful conditions in space.

Gommel said CO2 snow cleaning is a promising ultraprecision cleaning technology for space applications because it can remove particulate (biotic and abiotic) and molecular (organic) contamination simultaneously and very effectively and that it had been shown via a particular approach to be a suitable ultraprecision cleaning technology capable of fulfilling the high requirements of planetary protection.

Gommel argued that such concepts could be transferred to validate the efficacies of cleaning technologies relevant to other sectors – semicon, pharma or medical device industries. Degreasing with supercritical CO2 can remove particles in small gaps used in automotive components, it can also find use in medical devices and cleaning dental implant/tools to a better standard than cleaning using ultrasonics and it is a dry cleaning method rather than wet, he added.

As a result, the automotive industry discovered the benefit of cleanliness technology. Metallic micro-sized particles (>50μm) were identified as critical contamination because they can cause malfunctions in modern fluidic and electronic systems (fuel systems, brake circuits, lubricating and hydraulics systems, cooling and air-conditioning systems, air intakes or exhaust/systems). All relevant system components are cleaned after manufacture and the level of cleanliness needed for them to function must be specified and inspected. The industry uses extraction filtration – the capture of particles in liquids for counting – and this approach could be adopted in life sciences for looking at particles in injectables but on a very different scale, Gommel suggested. 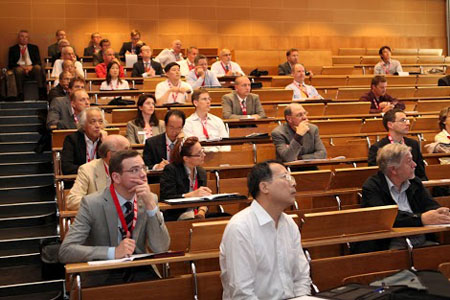 On the second day, Dr Roland Germann, Nanocenter Operations, IBM Research, gave a preview of the future with the advent of “nano” size transistors. He explained that just as progress in microelectronics had produced smaller mobile PCs and more powerful electronic devices, nanotechnology is likely to increase device performance even more. But he warned that the miniaturisation of materials gives them completely new properties with unusual effects, and introduces many manufacturing challenges.

The miniaturisation of materials gives them completely new properties with unusual effects, and introduces many manufacturing challenges

Two phenomena that can happen at the 1–100nm scale include: a drop in melting point – such that gold at a certain point will vaporise; and the lotus effect – where coatings and paints become non-wetting in a similar fashion to a lotus leaf.

Germann described how complementary metal oxide semiconductor (CMOS) technology for constructing integrated circuits had made paradigm shifts. Now the industry can get 1 billion transistors on a chip. This downscaling is still an effective way of achieving higher performance.

In the lab, metal oxide semiconductor field-effect transistors (MOSFET), used for amplifying or switching electronic signals, are already at the nanotechnology level with oxide thickness at around 1.1nm – the equivalent of about 5 atomic layers.

Industry players are already planning MOSFET with a gate size of 16nm but face challenges of current leakage and of variability during manufacture. In particular, the techniques of lithography would have to improve. New materials may hold the key, he said. Transistor concepts are available using carbon nanowires, for example.

However, while scientists can grow nanostructures such as carbon nanowires in a lab, it is another challenge to produce 1 billion to the same standard in a production facility. Such mind-boggling developments necessitate the production of “noise-free” cleanrooms for nano/microfabrication in the future.

While scientists can grow nanostructures such as carbon nanowires in a lab, it is another challenge to produce a billion to the same standard in a production facility

Sylvain Cottens, global head, Center for Proteomic Chemistry at Novartis, discussed the emerging technologies in drug discovery and the manufacturing challenges that these may pose for future pharma facilities. He illustrated how new emerging DNA sequencing technologies will speed up fundamental work in identifying gene mutations in rare diseases or in deciphering driver mutation changes in cancer cells, leading to novel rational approaches for therapeutic treatment.

He presented new technologies that are helping companies such as his find molecules for modulating or correcting the identified gene defects.

The main thread throughout his talk was that pharma research is now down to the molecular level. Although the cleanroom sector talks largely about nanometres and nanolitres (10-9 litre), Cottens explained that pharma researchers are working to zeptolitres, an SI unit of volume equal to 10−21 litres. At this level, the scientists use zeptolitre-sized holes as a kind of “well plate” to capture the fluorescence of a single molecule.

The miniaturisation of pharmaceutical analysis also means that DNA gene sequencing can be achieved using nanopores. This means in future they will use devices the size of a memory stick (USB) for a test and then throw them away. Cottens predicted that as a result of the rapid technological development in this area, in a few years the medical sector would be able to sequence human genomes in a day and for less than CHF1,000 (€828).

Dealing with such small units of material produces its own handling and transfer problems. Researchers have turned to techniques such as acoustic solution transfer, using sound to move 2–5nl fluid droplets from source plate to test area, eliminating any physical contact with the fluid – no pipette tips or probes.

Ultimately sequencing microbial genomes means that Novartis can now sequence its extensive library of bacteria to look for innovative drugs.

At this year’s event Dr Hans Schicht was honoured with an award for his long-standing service to the ICCCS and cleanroom community. 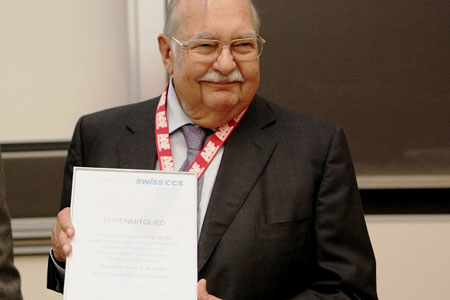 A graduate of process engineering, Dr Schicht was one of the pioneers who designed the first statute 20 years ago. Following several years of working in the field of cleanroom design, in 1991 he became an independent consultant specialising in cleanroom technology and contamination control.

Dr Schicht also served as the president and secretary of the Swiss Society for Contamination Control (SwissCCS) and represented Switzerland on the International Organization for Standardization (ISO) and the European Committee for Standardization (CEN) Technical Committees for standardisation in the field of cleanroom technology.

In addition to these keynote presentations, during the three-day event many cleanroom-specific topics and issues were covered in technical detail. A wealth of new processes, studies and concepts was aired, and the event was run by the organisers with all the proficiency and skill that would make Swiss watchmakers proud.

Preparations for the next event, being held in Korea in 2014, are already underway. For details visit either www.icccs.net or www.icccs2014korea.kr/01/01_01.htm