Markus Schaufele, manager of standards, compliance and emergency planning for the office of research safety at Northwestern University, describes the system of choice to keep costs under control 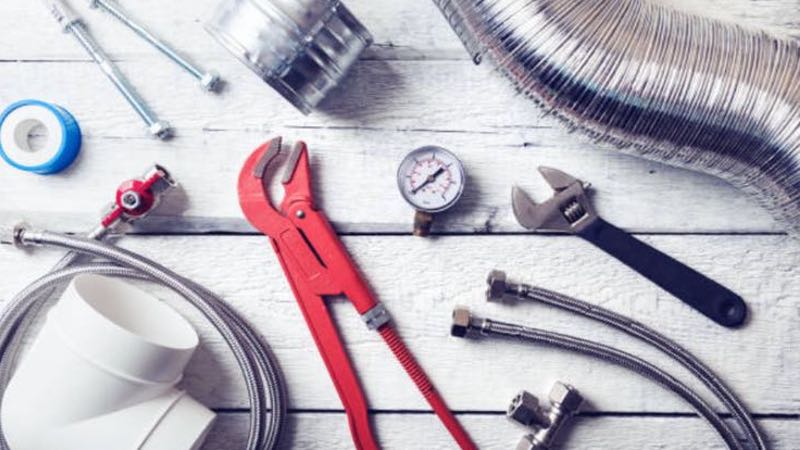 Laboratory buildings consume more than half of the total electricity demand at the Northwestern University (NU) in the US. A large part of this is for laboratory building ventilation systems.

Based in Evanston, Illinois, NU has 15 science research buildings on two campuses. This space allows about US$650 million in sponsored research activities. Approximately 5,000 NU researchers were registered to do wet bench research in NU laboratories in 2017, and many undergraduate students rotated through the undergraduate teaching labs on the Evanston campus.

Over the past decade, the university has been installing a ventilation optimisation system in laboratories that dynamically controls ventilation rates to reduce energy use, provide a better indoor environment for occupants as well as monitor space conditions and occupant behaviour.

In 2016, the laboratory spaces consumed almost 118 million kilowatt-hours (kWh) of electricity. At a cost of $0.08/kWh it totals nearly $10 million. This is about half of the University's total electricity demand. The ventilation systems’ electrical power needs at our laboratory buildings take a large part of this.

Ventilation in the science laboratories and vivaria serves four main objectives: safe breathing air for occupants; suitable temperature and humidity for research activities; dilution and transport of equipment heat loads; and spot exhaust for vented enclosures, including cage racks for animals, and fume hoods or snorkels for chemistry.

Whereas a ventilation system designed for an office building may recirculate most of its air and only supply a small percentage of fresh air, architectural and building codes require that laboratory rooms and vivaria use only fresh outside air for ventilation. This design difference explains why laboratories require so much more energy to operate. A large amount of energy is required to supply, heat, cool, condition, filter, distribute and exhaust this air in laboratory buildings.

The traditional laboratory design approach is to proactively ventilate all the time in anticipation of a chemical spill or release. This approach means exhausting the entire internal air volume of a typical laboratory into the atmosphere every 10 minutes. NU's traditionally prescribed air change rate (ACR) for laboratories is 6.2 changes per hour. The currently designed ACR for vivarium is 15 changes per hour. Since spill incidents and unsafe releases occur only rarely, laboratories are over-ventilated about 99% of the time. In the rare case of a spill or release, no extra clearance ventilation is provided.

NU installed its first ventilation optimisation system in 2010. Supplied by Massachusetts-based Aircuity, the system has been designed to monitor air quality related to use of a heat wheel – an energy recovery heat exchanger positioned within the supply and exhaust air streams of the air handling system.

In 2011, NU committed more than $40 million as a part of the Northwestern Energy Retrofit Fund (NERF) to pay for gas and energy conservation projects across its two campuses. This commitment to energy efficiency has decreased the amount of electricity purchased from the grid by almost 5%, even as the square footage of occupied space has increased.

A year later, a large national energy services company implemented an energy conservation project for the Chicago campus research buildings, and a demand control optimisation system was implemented during various lab floor remodels. In 2013, the NU Facilities Department began coordinating installations of the system at several Evanston campus science buildings, completing the installations in 2015 and 2016. 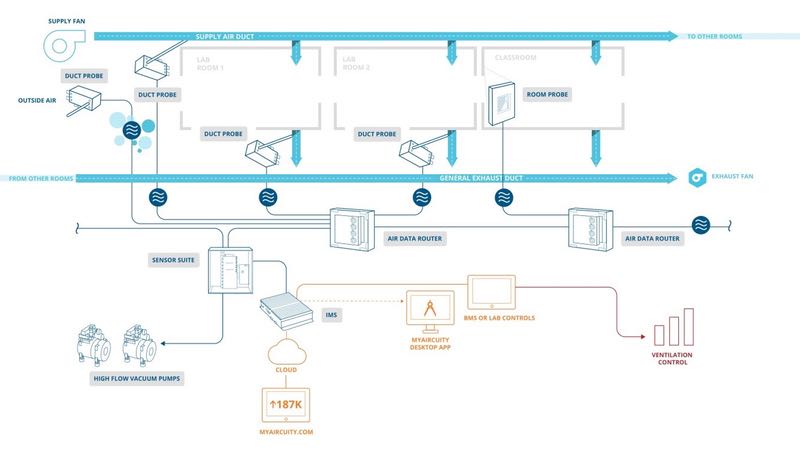 As of spring 2017, the Aircuity system had been installed in 130 laboratory rooms on the Evanston campus and 370 laboratory rooms on the Chicago campus. Each system includes a “sensor suite,” built to accept a variety of sensors for multipoint sampling of the indoor environmental parameters. The sensor suite analyses each air packet and sends smart signals to optimise ventilation. A total of 34 sensor suites were installed, with two more planned for a vivarium on the Evanston campus.

Transparent communication with the laboratory users is important, since most of the sensors and control elements are hidden from view. Additional touch screens were installed in laboratories to provide feedback on current ventilation settings. Researcher adherence to operational limits is more important in laboratories where the ACR can be below 4 ACH.

For laboratory applications, the optical particle counter counts small particles (PM2.5) in in one range: 0.3-2.5 microns (μm). For vivarium applications, particles can be counted in two ranges: 0.3-0.5μm and 0.5-2.5μm. This feature can be useful to verify HEPA filter integrity on the supply side and efficiencies in clean space operations.

The installed system commands the lab control system to dynamically increase the laboratory air changes above a particle count of 500,000 per cubic foot of air. This is accomplished by opening control valves in the ventilation ductwork of the affected space and may also affect the variable-frequency drive (VFD) controls of the ventilation fans. The system calls for the highest air change rate at and above 5,000,000 particles per cubic foot.

For laboratories, the most useful capability is the sensing of TVOC, either using a metal oxide semiconductor (MOS) or a photoionization detector (PID) calibrated to isobutylene. The PID can be calibrated to both ammonia and isobutylene. Once a sample air packet reaches the sensor suite, the response time is 30 seconds. The accuracy of the PID is ± 0.2 parts per million (ppm) or 2.5% of reading (whichever is greater). The resolution of the PID is 0.025ppm. The drift stability of the PID is ± 2ppm/6 months at 5ppm isobutylene. The maximum TVOC range is 100ppm for the MOS and 20ppm for the PID.

According to the optimisation system vendor, the MOS sensor provides complementary detection capabilities, as it will detect parameters (including but not limited to methanol, methane, nitromethane and methylene chloride) that are either not sensed or only poorly sensed by the PID.

The optimisation system cannot take on life safety tasks or be used in lieu of a dedicated toxic, flammable or oxygen depletion gas alarm systems. The system should only be deployed in low hazard laboratories. Maintaining a lab operational permit system with periodic checkups is advisable.

An air sampling pump sequentially delivers packets of air from each connected sensing tube to a centralised sensor suite. Depending on the array configuration, delay times up to the maximum allowed 15 minutes are possible. The PID used in the system uses a 10.6 eV bulb. Flammable gases or vapours with a higher ionisation potential, for example, hydrogen, are invisible to the system.

A laboratory operations permit system should set threshold limits to the use of oxygen depleting agents. For example, the hazards from spillage, dispensing, or use of liquid nitrogen should be considered.

The optimisation system used at NU reduces the general laboratory exhaust and respective fresh air inflow, but it does not regulate fume hood exhausts. Laboratories that contain several fume hoods which demand high exhaust ventilation will not realise energy savings. In equipment rooms where the equipment heat loads demand high ventilation rates for cooling, there is nothing to gain from the system. However, future laboratory equipment design conversion from air to liquid heat exchange may lead to additional energy saving opportunities in these spaces.

Chemistry teaching labs have many fume hoods, but only limited daily or periodic use. At other times the fume hoods may be empty. Best design practice may be to manually turn all fume hoods exhaust on/off using a master switch. Investment in an optimisation system may have limited payback in these areas, but could provide lab monitoring capabilities.

Since the system’s particulate sensor only monitors two particle size bins, it usually is not used to dynamically control ISO Class 1–6 cleanroom ventilation rates. Currently, NU is investigating the use of the particle sensing technology for ISO Class 7–9 cleanroom areas.

The best payback may be achieved in vivarium animal spaces. Animal releases of VOC and particulate into the secondary barrier (the room) will dynamically open ventilation valves for more fresh air. With directly ventilated cage racks this release is not frequent. We expect significant energy savings when the ventilation rate can be kept well below the traditional 15 ACR design for vivaria.

Efforts to accurately quantify NU total laboratory energy savings are continuing. In addition, NU uses the data delivered through these ventilation optimisation systems to diagnose air quality or temperature-related issues that may arise during laboratory operation.