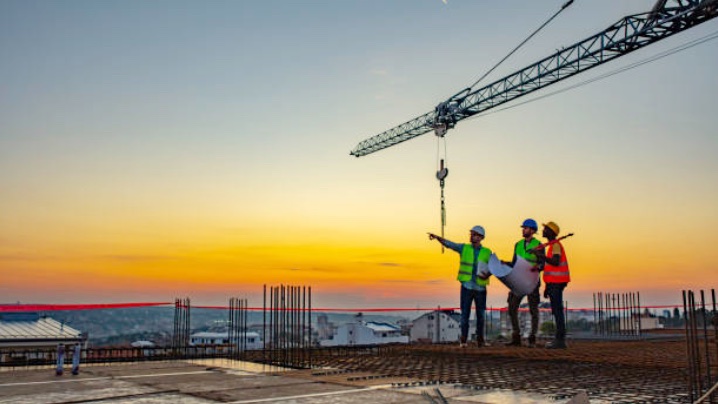 Sectors that demand cleanroom environments have been making major manufacturing expansions in 2019, and cleanroom builders have taken part in multimillion-dollar projects for the pharmaceutical, hi-tech, space, and industrial production.

This review takes account of expansion plans, across pharma and hi-tech manufacturing, nodding to the major trends in these industries.

The majority of builds seen in the pharmaceutical sector in 2019 have been in Europe and the US. Ireland has been a particular place of interest for construction, seemingly a strategic location for businesses during the upcoming withdrawal of the UK from the EU.

WHP Engineering has been heavily involved with the biotherapeutics industry. In the middle part of the year, the UK-based company completed a US$6.7 million contract with ADC Bio for its Welsh manufacturing plant that manufactures antibody-drug conjugates.

Ireland has been a particular place of interest for construction, seemingly a strategic location for businesses during the upcoming withdrawal of the UK from the EU

WHP’s scope of work covered design and build, including test and validation of a state-of-the-art containment manufacturing cleanroom within the existing 6,500 sqm facility, alongside new QC and process development laboratories. With four complex HVAC systems onsite, this project was a large undertaking.

An exploding sector of the biotherapeutics industry is cell and gene therapy. Demand is increasing in this new type of medicine, and WHP also signed a contract with Oxford BioMedical for its new viral vector manufacturing centre in England.

The specialist areas in the converted facility have been designed in full compliance with the MHRA and conform to ISO cleanroom standards, expected to be ISO Class 7 and 8. This includes the use of zoned HVAC systems to maintain segregation, cleanliness, air pressures and other environmental controls.

Astellas Pharma and Fujifilm have also invested in the regenerative therapy sector. Astellas has built laboratory space for cell and gene therapy start-ups, directing almost $13m toward two new innovation incubators in the US. In the UK, Fujifilm has expanded its cell culture process development capacity with 7,000 sqft of laboratory space. 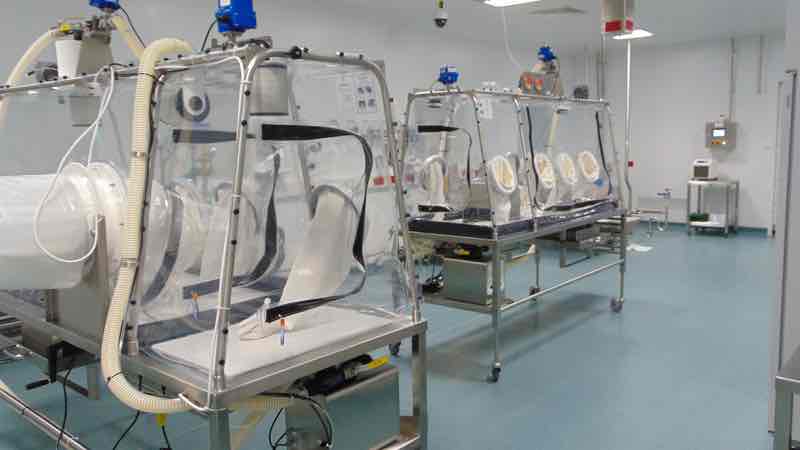 Modular construction continues to be a major trend within pharma, and it is being used to lower the construction costs. G-CON Manufacturing has been contracted for the installation of its PODs in a few high-profile facilities, most notably for pharma giants Pfizer and Merck.

Contract services are also showing no signs of slowing their growth. More companies are being formed regularly, required significant capacity to stand out in the competitive sector.

CDMOs WuXi and Cambrex have both invested in cleanroom capacity. WuXi put $240m to build a new vaccine manufacturing facility in Ireland. Located in the WuXi Biologics Campus the plant is scheduled for commercial manufacturing in 2021. Cambrex expanded within Europe, completing a 150 sqm R&D lab in Italy.

Breaking the trend of Europe and the US, Sahajanand Medical Technologies plans to build Asia’s largest stent production facility. The medical device manufacturer will build the facility in the Hyderabad region. This region is quickly becoming a hub for pharma, and subsequently cleanroom projects, reflecting the growing industry in India.

Trends in pharma have been well established for years, and even in new sectors, there are veins of similarity in the cleanroom specifications they require, and a new frontier has arised in the IVF industry. This is a vast new sector promising many projects in the future. Based on 2019 figures, there are over 3,000 clinics worldwide alongside a need for IVF that is ever-growing.

Asia is also a booming location for hi-tech applications. This year hi-tech cleanroom build news has come out of Singapore, Taiwan, Korea, and Hong Kong.

Systems on Silicon Manufacturing Company has built a $220m 4,400 sqm cleanroom in Singapore for silicon chip production. Taiwan’s Vanguard Semiconductor International has upped wafer manufacturing capabilities with a $110m investment in equipment and cleanroom upgrade. In Korea, SK Hynix is building four new semiconductor fabrication plants at a hi-tech cluster in Seoul. Meanwhile, the Hong Kong Science and Technology Parks Corporation (HKSTP) has set up a new sensor lab with a shared ISO Class 2 and 3 cleanrooms. 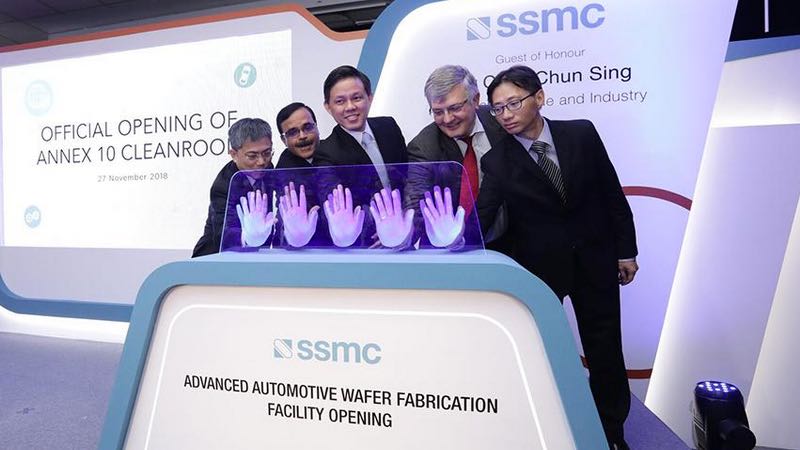 Speaking about Asia’s part in the global industry, Albert Wong, CEO of HKSTP, said: “Hong Kong is going through a new era of re-industrialisation, with a strong focus on advanced manufacturing. This, in turn, is fostering the rapid growth of the micro/nano sensor industry.”

In Europe, the EV Group has begun construction on another extensive building project at its headquarters in Austria. The wafer bonding and lithography supplier will invest $33.4m to build its new Cleanroom V building, 620 sqm of additional cleanroom floor space. This nearly doubles the cleanroom capacity in EV Group’s Austrian location.

Though many opportunities exist in corporate environments, 2019 has brought about many expansions in academic facilities.

Clean Room Construction (CRC) has taken advantage of the growing demand for advanced nanotechnology cleanrooms in academic settings. Last February, the UK-based company completed a multimillion-pound nanofabrication facility for the Royal Holloway, University of London. The site is housed inside a $2.7m ISO Class 5 cleanroom. The so-called SuperFab will be the home of the UK Centre for Superconducting and Hybrid Quantum Systems. Eight months later, CRC finished a $2.7m cleanroom suite at King’s College London’s Strand Campus, comprising of cleanrooms and optics labs.

Academic organisations often need more flexible cleanrooms as it is not one rigid process that is being carried out, but a variety of research methods that will vary slightly year-on-year.

Rochester Institute of Technology, for example, is performing a $1m upgrade at its Semiconductor and Microsystems Fabrication Laboratory (SMFL) to further advance the university’s research in integrated photonics, quantum information technology, biomedical devices and sensors for smart systems. Improvements to the 10,000 sqft cleanroom will provide flexibility to enable the university to expand its research, teaching, staff training and entrepreneurial capabilities.

On a slightly larger scale, the US Department of Defense (DoD) has chosen SkyWater Technology for a $170m multi-phase project to enhance microelectronics capabilities for Strategic Radiation Hardened applications. The investment has allowed SkyWater to begin expanding its existing building footprint to accommodate supporting infrastructure and 8,000 sqft of new cleanroom.

Although the most abundant hi-tech cleanroom projects centre around semiconductor and electronic applications, these are by no means the only ones. Another high profile project was carried out by Connect 2 Cleanrooms (C2C) for CERN, the Swiss particle accelerator company.

With the highly calibrated pieces of machinery in place at the facility, there is a risk that exposed parts could be affected by particulate contamination during assembly or servicing. Contaminants inside the chamber could affect how proton beams travel, rendering them ineffective. Conducting the assembly inside a cleanroom reduces the risk of particulate contamination. 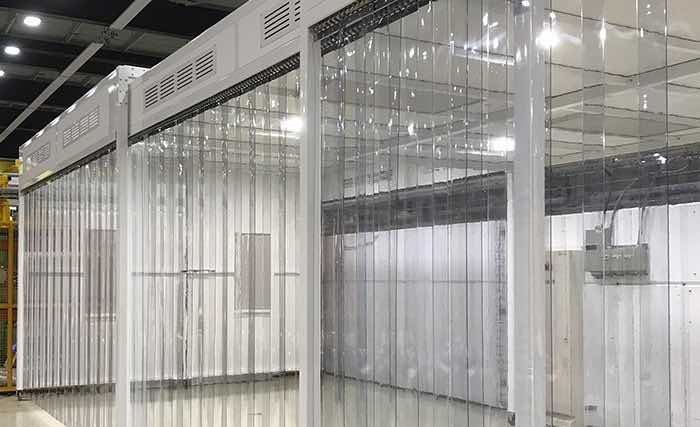 Collaborating with CERN scientists, C2C designed a concertina cleanroom with three moveable modules that extend on guide rails from a closed position, tripling the floor space. So, when larger beam intercepting device sections have been craned into the servicing bay, the cleanroom can be extended, laterally enveloping the part. Doors can then be closed and locked in position for safety and integrity. The softwall cleanroom houses six HEPA filter fan units (FFU) to maintain the clean air integrity no matter what the configuration.

Advances in the aerospace sector is another source for cleanroom projects, with multiple governmental and private organisations investing in increased space for satellite production and testing.

In the US, R2 Space’s increase in contract caused it to relocate and expand its headquarters in Ann Arbor, US. The expansion will include an ISO Class 8 cleanroom, electrical and mechanical test labs and associated specialised test equipment, manufacturing equipment and a satellite operations mission centre.

Europe’s space programme is pushing to grow in the next few years. QinetiQ Space is a private UK-based company that mostly works with the European Space Agency (ESA) to supply small satellites and advanced subsystems. Last November the company opened its new cleanroom in Belgium. The $3.35m facility provides conditioned, purified air at an overpressure to ensure that even when the doors are opened, normal air is unable to enter the facility.

In the UK the Satellite Applications Catapult has entrusted the construction of cleanrooms in Oxfordshire (UK) to WHP. The contract saw WHP design and build a 440 sqm ISO Class 7 cleanroom facility at the DISC facility on the Harwell Campus, where it will accommodate seven satellite production and assembly areas.

Cleanrooms for products going into space are not just important to ensure their successful operation, but also because any microbes that are sent into space can easily become resistant strains that could be extremely detrimental to humans if they return. This has become a particular concern of sending astronauts into space, and those in the industry are actively searching for answers to this troubling issue. For now, the answer revolves around sterile production, or as close as can be managed.

In engineering, there is a huge range of applications for cleanrooms. C2C built an ISO Class 7 cleanroom for Scotland-based naval engineering company, MacTaggart Scott. The cleanroom is for assembly of precision machine parts and bearings with improved quality and cleanliness. C2C will provide support for the company over the next five years, including annual validation visits and emergency call-out cover. 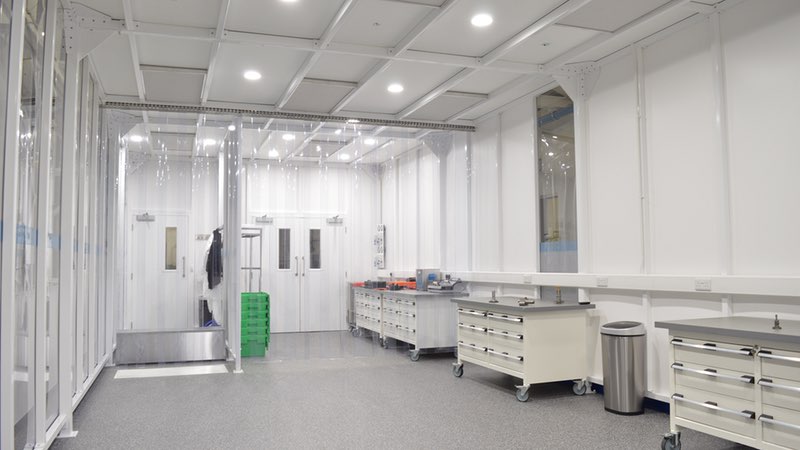 The Mars rover is a particularly interesting engineering project and is being built inside of NASA’s Jet Propulsion cleanroom in California. NASA has been live-streaming the entire process from inside the cleanroom, running webchat with operators weekly. The live stream will wrap up in mid-2020 when the rover is launched.

Hydroponic farming is a new technology that is growing in popularity as farmers try and keep up with the global food demand. Climate controlled conditions necessary for this practice require much of the same HVAC technology as used in cleanrooms for other purposes.

This year in the UK, Ocado entered a joint venture to support the newly emerging vertical farming industry. The venture included the majority acquisition of JFC and its facility. The state-of-the-art facility has been designed to produce leafy greens and herbs for UK customers with its capacity expected to grow to 420 tonnes a year.

With more than 5,000 sqm of production area and 12 km of LED lights, JFC can produce consistent crop yields throughout the year and plans to expand crop types and production across the UK. JFC’s cleanroom operations provide additional exciting options to cultivate cosmetic and pharmaceutical-grade crops. 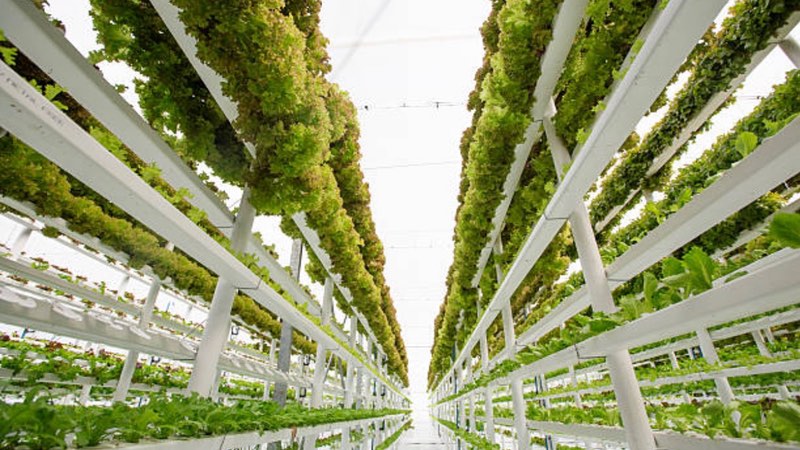 Ocado’s joint venture included working with Priva, an industrial systems provider to the horticultural industry, with a wide range of products and solutions for climate control and process automation.

The quantity and range of projects this year are a testament to the ever-growing cleanroom sector, which signals that despite difficult conditions, there was still growth.

N.B. This article is featured in the January 2020 issue of Cleanroom Technology. Subscribe today and get your print copy!