The Masdar Institute of Science and Technology (MIST) in Abu Dhabi, UAE is one of the world’s most sustainable facilities with a near net zero carbon footprint

The Masdar Institute of Science and Technology (MIST) in Abu Dhabi, UAE is one of the world’s most sustainable facilities with a near net zero carbon footprint. MIST buildings 1A and 1B comprise mixed-use lab, office, classroom, and residential space over some 150,000m2. The region has a severe climate of very high temperatures, similar to that of India, but with even higher relative humidity (RH).

MIST used DBC in its classrooms and office areas to reduce ventilation based on determining occupancy by sensing CO2. In the labs, DBC is used in conjunction with either chilled beams or fan coil units to reduce lab ACRs to 2 ACH day and night when lab air is sensed to be clean. When contaminants are sensed, purge airflow rates of as high as 14 ACH are commanded to provide greater dilution than the fixed minimum of 6–8 ACH for safer operation.

The lab’s VAV fume hoods were initially designed to go as low as 150 l/s when the sash was closed but, due to the new ANSI Z9.5 standard, a VAV fume hood minimum of 45 l/s increased energy savings further.

DBC is providing savings for this project that will be around 9,000MWh p.a.

In addition to significant reductions in energy use, the reduction of lab airflow rates by DBC can also lower capital costs. Even though a single lab may go to higher flows when contaminants are detected, this only happens typically about 1–2% of the time. As a result, there is considerable diversity in the system and the peak flo­w can, in many cases, be significantly reduced, particularly when the cooling load is decoupled from the supply air flow.

For example, a 20,000m2 lab project for the Cal Poly Center for Science & Mathematics in California used the combination of DBC and chilled beams to reduce the first cost of the project even including the cost of the chilled beams and DBC by US$716,000.

For the MIST 1A and 1B projects that are trying to achieve a near net zero energy status, not only were there significant reductions in the HVAC capital cost but the annual energy reduction of 9,000MWh also translated into a cut of about 4MW in Photovoltaic panels that would have been required to generate this energy. Eliminating the need for these solar PV panels saved the project almost $20m in capital costs.

The safe reduction of the airflow rates to as low as 2 ACH in a lab with an approach such as DBC has by far the single largest impact on reducing lab building energy use, sometimes by as much as 50%. Decoupling thermal loads and ventilation when used with DBC is also another important step to reduce lab energy and, even more significantly, to reduce first or capital costs.

While heat recovery can provide good payback for certain climates, reducing ACH usually has much better payback and savings.

A new lab energy analysis tool was recently developed to analyse the savings of DBC plus other energy efficient design approaches for labs, such as chilled beams, multiple types of heat recovery, variable exhaust exit velocity control, etc. This tool also gives an accurate view of the interaction of these approaches used together.

Figure 1 shows a holistic view of multiple lab energy savings approaches. One of the messages illustrated by this figure is that the foundation for lab energy savings is a VAV control system that by itself may not enable significant savings but is required to enable other approaches to reduce lab flows and lower capital costs. 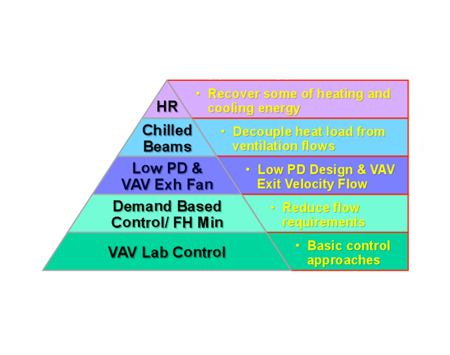 Next most important is DBC and the related use of low VAV fume hood minimums and, if needed, automatic sash closers, at least for those labs with a moderate to high density of fume hoods. The other approaches listed above DBC, such as chilled beams and fan coil units, can further increase savings.

Heat recovery has an impact that varies significantly based on climate, with the greatest impact for very cold or very hot climates. For humid climates, enthalpy wheels may have a benefit. However, they cannot be used with any fume hood exhaust mixed into the room exhaust, therefore, these exhaust streams must be separated, allowing the enthalpy wheel to be used with just the room exhaust. Note, however, that even in climates that are very favourable towards heat recovery, reducing lab flows to at least 2 ACH at night and 4 ACH during the day will usually still save three or more times that saved with an enthalpy wheel.

The collective impact of these energy saving approaches can be seen in the following analysis that uses the climate of Abu Dhabi (the energy impact of climates such as Mumbai and Chennai are 10–20% worse in terms of cooling costs than that shown for Abu Dhabi).

Figure 2 shows the results of the lab energy analysis. The base case using 6 ACH shows an HVAC energy use of $606,000 distributed between supply and exhaust fan power, reheat and cooling, as shown. Note that for climates like Abu Dhabi and much of India this HVAC energy use represents 65–80% of the total lab building energy. 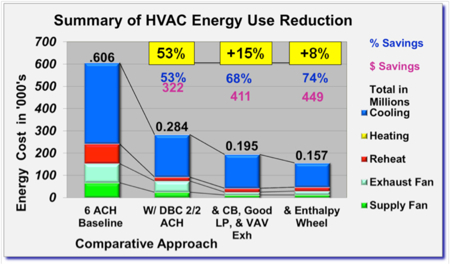 The figure shows that using DBC similar to that at Masdar reduces energy use the most, by 53% (or $322,000). An additional energy saving of about 15% (or $89,000) can be achieved by the combination of adding chilled beams, good low pressure drop design, and the use of a VAV exhaust fan control system. Finally, if an enthalpy wheel heat recovery system is added to the HVAC system an additional 8% of savings or $47,000 can be achieved. Using a combination of these different energy savings provides a total energy reduction approaching 74% (or $449,000).