Laboratory space is more expensive to build and run than most other facilities, so getting better performance and value out of labs is critical. Susan Birks reports from the recent S-Lab conference on lab design trends and cost-saving solutions

The S-Lab Conference programme and Awards aim to recognise best practice in all aspects of lab design and management. The two-day conference, entitled Supporting World Class Science, this year held at King’s College London, brought some 350 facility designers, managers and lab users from around the globe to discuss best practice. Some of the most innovative and internationally groundbreaking new builds were presented, showcasing the latest trends in configuring space that is flexible and productive yet placing sustainable technology and energy efficiency at the heart of the design. Personal insights on their practicality and success made for fascinating listening.

The goal for most new builds is to create productive space, attain the highest Building Research Establishment Environmental Assessment Methodology (BREEAM) or Leadership in Energy and Environmental Design (LEED) credentials and get as close to being carbon neutral as possible. For each different lab location, local climate, energy costs and water availability can have an impact on design, which means no two labs around the globe are likely to be the same or have the same issues, but many trends are universal.

Lab flexibility is a hot topic for many facilities. As markets fluctuate and production processes change rapidly, lab space needs to become more adaptable. Modular labs that can be reconfigured to meet future needs is a key trend.

To increase R&D productivity, there is also a desire for greater collaboration among researchers (from the same and different disciplines). Paul Janssenswillen, CEO SciTech Engineering, discussed the fall in drug discovery productivity and the recent relocation of R&D to ‘Scientific Super Clusters’ (Cambridge UK, Cambridge MA, San Francisco, etc.) to aid collaboration efforts and recruitment of talent.

Bright airy spaces with vibrant colours, lots of transparency and face-to-face connection certainly look impressive and may work for some – but not necessarily for everyone. As one speaker noted, scientists tend to be more introverted people preferring corners rather than highly visible spaces. There is often a disconnect between those at the top, specifying and paying for buildings, who are used to offices, and the scientists in the labs at the front line of research.

The move towards flexible, shared space is also being driven by the perception that many labs are under-utilised. Several speakers, however, highlighted the difficulties in getting people to consider shared labs. Shared facilities often lead to a blurring of who is responsible for ensuring equipment is used properly, maintained and replaced when broken.

Hilary Jeffery from architect and constructor AECOM, said the academic arena can still encourage an individualistic mindset: ‘Research activities are about individuals and their personal interests, which can create high levels of lab ownership and empire building.’ Others believed that cultural and political difficulties in sharing labs could be overcome by change management.

It is undeniable that actual time spent in the lab has reduced dramatically, which makes lab space appear under-utilised for large amounts of time while still requiring expensive lighting, ventilation, temperature and humidity control.

As computers have replaced lab notebooks and Internet access has become essential, the writing-up of experiments has shifted away from the lab

As computers have replaced lab notebooks and Internet access has become essential, the writing-up of experiments has shifted away from the lab. Many more processes are also now largely automated so labs are visited mainly during set-up and breakdown of experiments.

To counter the doubling up on office and lab floorspace, labs today are being built with integral write-up and meeting space. Meanwhile, because lab processes, require more complex monitoring and use remote, web-based technology, lab benches and fume cupboards must allow for installation of more computer screens and Internet-driven devices. As one speaker put it: ‘When it comes to WiFi power, you just can’t have enough these days.’

Making labs more energy efficient has moved beyond the quick wins of installing lights that use motion sensors or timers, and encouraging people to close fume cupboard sashes more frequently. Better design of where to locate plant and proper sizing of load is enabling organisations to specify smaller air handling units (AHUs) and cut down on expensive ductwork. New technology that can be introduced on new builds or retrofitted to existing labs is also being employed to cut HVAC costs.

Mike Morgan, Executive VP and COO of the Oklahoma Medical Research Foundation (OMRF) in the US, for example, said that when designing its new Research Tower, the OMRF managed to reduce the load by the use of Chilled Beams and Venturi Wedges. Installing these technologies enabled the use of smaller AHUs, smaller and fewer ducts, and reduced chilled water and steam requirements, leading to reduced overall energy and no need for flow tracking controls. The gains made, however, must be balanced with the need for a secondary water loop and the requirement for constant volume air, he said.

Many organisations were managing to safely rachet back air change rates (ACRs) during periods of inactivity. Mel Leitch, Superintendent, and David Pearson, Estates Project Manager, at Newcastle University Institute of Neurosciences, for example, talked about the department’s new extension which had an AHU that enabled them to switch between 15 air changes/hour (ACH) when research was going on and 4ACH when rooms were out of use. But as Leitch pointed out, that reduced air flow meant that the overall cooling capacity also reduces – so keep in mind that extra cooling contingency may be required to compensate for this.

Vivariums are one of the biggest users of ventilation and have specific ACRs (usually 15ACH) to ensure that animals are comfortable and that workers do not suffer from exposure to allergens or high levels of ammonia. 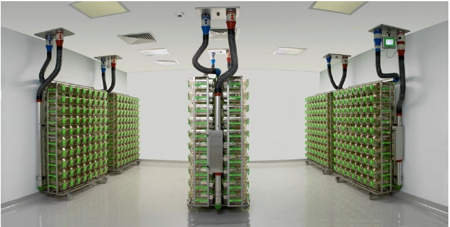 Tecniplast, which designs ventilation systems for vivariums, has successfully reduced energy costs by separating the room ventilation from that of the cages. Its Airflow Solution integrates Individually Ventilated Caging (IVC) air delivery and exhaust with the building’s air handling system. It employs a Multi-Flow AHU design and includes a climate control system connected to each cage rack that continuously monitors and maintains the relative humidity. This means individual cages don’t change their pressure mode with a change in the environment. Also by taking the ­air in the room (not in the cages) from outside there is no need to worry about humidity; only the air going to the cages has to be treated for humidity, creating a big saving.