Fishers Services has for many years been a big player in the UK linens and laundry business but a small player in cleanroom garment laundering. Recently it expanded and is now providing a national bespoke service. Susan Birks visited the cleanroom facility in Livingston to find out more

The recent past has seen fierce consolidation in the UK cleanroom garment laundering sector, leaving only a couple of players set up for large capacity, highly automated services and a handful of smaller companies offering local cleanroom laundering services. At one time, Fishers Services would have fitted the latter category – the leading textile rental, industrial workwear and laundry business serving Scotland and the north of England was big in the hotel market but small scale in terms of its cleanroom laundering operations. But more recently the company has changed tack, and has invested in its cleanroom laundering services with the aim of offering its bespoke service more widely across the whole of the UK.

Founded in the 1900s, Fishers was built up by five generations of one family. The company had one of the very first cleanroom laundry businesses, started in Aberfeldy some 25 years ago. But in 2003, when the family sold its majority share, the company went through a series of refinancing deals. Now it is majority-owned by investment fund Caird Capital, backed by the Lloyds Banking Group.

The company acquired the cleanroom laundry business of Origin in June 2012, and two of the directors have stayed with Fishers: Joe White, Divisional General Manager, looking after Cleanroom, Workwear and Chefswear; and Jim Polasik, General Manager, Garment Sales. Aiming to carry through the expansion plan (while maintaining the company’s traditional family-run business values), is Michael Jones, who was appointed Group MD in June, having been with Fishers since 2000.

The company recently completed the upgrade of its cleanroom laundry facility in Livingston, and believes it is now in a good position to run a national cleanroom laundering service. Jones explains that, as part of the larger linen and workwear group, Fishers cleanroom arm has the backing of a business with a combined annual turnover of more than £35m, which gives it the size and stability that some of its larger customers want.

The cleanroom is housed in the leased premises of former engineering business Metron Technology – a 28,000ft2 building with offices on the Kirkton Campus. Currently 25 people work at the site, with Garment Operations Manager Andy Mackay overseeing the day-to-day running of the laundry cleanroom. 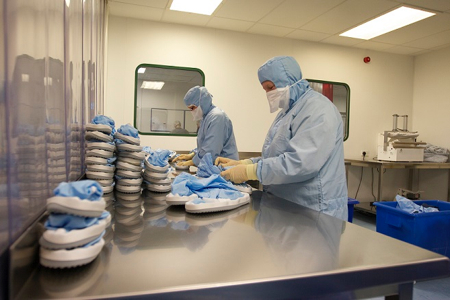 Cleanroom boots are folded prior to being packaged and autoclaved

‘Many of the major pharmaceutical businesses require their suppliers to have built-in redundancy off site as a back-up to ensure uninterrupted service,’ says Jones. For that reason, Fishers’ site in Aberfeldy, Highland Perthshire, Scotland, is kept operational and is capable of producing 12,000 units per week.

The company aims to maintain its current flexible service: ‘We have deliberately not automated parts of the facility, which means we have a certain amount of flexibility in the way we can handle, fold and package the garments. We are able to offer all kinds of customisation, whether it is badging, different kinds of cuffs, better-fitting garments, or folding garments in certain ways,’ Jones explains.

The ISO 14644-validated cleanroom laundry now has three cleanroom class areas: an ISO 4 class cleanroom for folding and packing of washed garments; a secondary ISO 5 bagging area; and a separate area for ISO 7 garments. It also has a gowning area, allowing those handling the garments to put on full cleanroom clothing.

The garments first pass through a check-in area where they are assessed for damage or wear and tear, and replaced if necessary. Each garment is barcoded and can be tracked throughout its lifespan and washed in batches, allowing complete traceability – in contrast to larger, more automated laundries where the garments pass through a washing tunnel on one continuous conveyor. 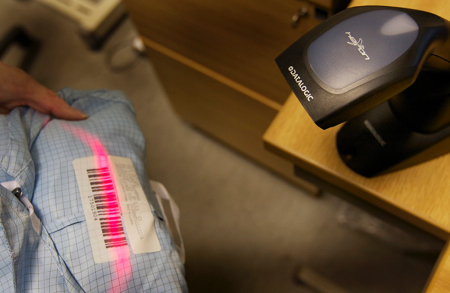 Each garment is barcoded and can be tracked throughout its lifecycle

At Fishers the garments are fed by hand into one of the two washing machines on one side of the partition and, after laundering, are removed from the washers on the other side of the partition in the ISO Class 4 environment. Once folded in accordance with customer specifications, the garments are bagged, heat-sealed and, where required, sent either for autoclaving or for gamma irradiation.

The cleanroom facility also houses a Helmke Drum connected to a particle counter, which is used for measuring the particle emission of garments and also to check the particle count in the cleanroom. The cleanroom is cleaned on a daily basis and more deeply on a monthly basis. All the company’s plants are accredited to EN14065 – the European standard for biocontamination control.

The recent investment also included installation of a more efficient air handling and filtration unit which, along with the new washing equipment, has enabled the company to increase washing capacity to 25,000 units per week. It currently runs one daily shift, but it has the capacity to run more shifts and has more than enough space to expand the facilities in the future.

The plant room next to the cleanroom houses a reverse osmosis plant for the supply of high quality water. This relatively expensive method of supplying clean water ensures that unwanted metal ions and other contaminants are removed from the water prior to its use, which can be important for some cleanroom users.

Another area that the company has focused on is improving its delivery service. Jones says Fishers is now able to deliver across all parts of the UK (except Ireland) and, where it used to deliver largely by courier, it now has its own fleet of vehicles and drivers covering the North, while in the South the transport logistics are managed in a partnership by a transport provider. This means drivers don’t just drop a delivery at the door, they unload the garments in the designated location for the client, he explains.

Business is growing, and while Fishers already has a sales presence in Swindon, Wiltshire to cater for Southern clients, Jones says that in the next five years he would like to see the company open business premises in the south.

‘We see the UK workwear laundry sector as a growing area. It is estimated to be worth about £15m currently and growing steadily,’ he says. While the client base has changed over the years, due in part to a major shift by the electronics sector to cheaper locations overseas, the life science and healthcare sectors are growing fastest. ‘There is an increased awareness of the importance of safety and compliance that is helping to grow the industry,’ says Jones.

There are other trends helping to drive business. For example, more life science companies are requesting garments with ‘Steri fold’ – a folding method that enables workers to don suits without the garments touching the floor or the wearer touching the outside of the garment.

With each new customer, the company carries out a risk assessment to find out what kind of contamination gowns are likely to be carrying and what level of cleanlinesss is required. The company will also then discuss the best route whether it be leasing or ownership of the garments.

Fishers says it makes a point of not charging customers large ‘residual values’ when companies look to change supplier – something the company believes has been a barrier to competition in recent years. ‘We try to be transparent in business and look at long-term business. We offer more choice; we can sell companies the garments and we process them, or offer a full rental service, or a hybrid where they rent garments and we charge for the laundry service. We discuss with them what is their best option. It has taken time to get people to realise they have a choice,’ says Jones.

The trend for ownership of the garments among companies is growing and is largely being driven by emergency planning, he says. For example, should a laundry burn down and the garments be destroyed, the lead time for renewing them in sectors where compliance is an issue can be anything from three to six months. Thus it makes sense for companies to own and store their own garments. ‘They like to own their garments because they are critical to their operation – that is the way it is going,’ says Jones.

‘Traditionally on the Continent, you see a vast array of garment styles but the cost tends to be higher. The UK has been more like the US, where price is everything, and as a result has accepted a more generic garment – but that mentality is starting to change,’ he claims.

General awareness of infection control among healthcare facilities is also growing business. General Manager Jim Polasik sees garments with embedded antimicrobial properties having more widespread use in future. Garments with antimicrobial fabrics based on impregnation with silver ions have recently been introduced, but whereas with some of the earlier versions the silver would wash out after a couple of washes, the latest techniques enable silver ions to be effective for about 150 washes without the silver dissipating, he says. 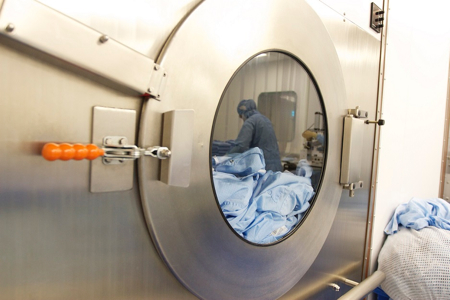 The need for infection control is growing the laundry sector

‘Such properties could be a huge benefit for the NHS....We believe that the ISO 7 market will grow as infection control requirements get stricter.’ Jones is also optimistic about the future: ‘What we have seen is a move towards greater compliance, which has led to an increased frequency of gowning changes per shift and wider use of professional laundering of all workwear, not just the cleanroom gowns, rather than relying on employees washing their own uniforms at home.’

While the recent economic downturn has created a difficult arena for many in the competitive laundry sector, Fishers believes it is in a better position than ever to make the most of any growth in the cleanroom sector.