German manufacturer of oral dosing pipettes and injectors, elm-plastic, recently solved a problem of cleanroom production of flawless 8ml injectors in a 32-cavity mould with help from Sumitomo (SHI) Demag

Düsseldorf-based manufacturer elm-plastic is one of the latest precision manufacturers to realise the advantage of using activeFlowBalance from Sumitomo (SHI) Demag in its all-electric IntElect machine. In doing so, the producer of medical injectors has addressed the issue of producing thin-wall components in 32-cavity moulds, evening the fill and boosting output by 50% while also increasing general production quality.

Until recently, manufacturing flawless 8ml injectors in a 32-cavity mould had presented the elm-plastic engineers with a major challenge. When components with long flow paths also have small wall-thicknesses, as these have, difficulties can arise. The components in question have a prescribed wall-thickness of just 1mm – while the flow path is longer than 100mm. 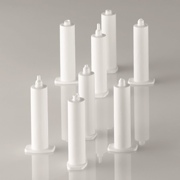 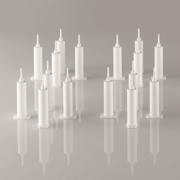 To boost output rates without increasing production times, elm-plastic developed a 32-cavity mould in-house. But when they tried it on the company’s electric injection moulding machines, they encountered a problem of uneven fill. Any increase in the injection pressure produced unwelcome burrs and defects.

Using an electric test machine – a necessity in cleanroom production facilities – 24 evenly-filled cavities was the best result the manufacturer was able to accomplish. Rather than give in, the team set about exploring alternative options.

They tried mounting the 32-cavity mould on old hydraulic machines. Although this delivered the quality and even fill, the company had been moving over to all-electric systems for close to a decade and remains a huge advocate of the benefits. ‘Electric machines offer a range of benefits for cleanroom production, while hydraulic machines always carry the risk of contamination,’ said Uwe Lehnert, Head of Production. ‘Moreover, we appreciate the increased precision of electric machines and their low maintenance requirements. And it is easy to deal with any errors that may occur.’

However, an electric IntElect machine made by Sumitomo (SHI) Demag and equipped with activeFlowBalance met the customer’s exacting conditions on the 32-cavity mould. By fortunate coincidence, a sales engineer from Sumitomo (SHI) Demag was in the facility presenting this very system.

‘When Sumitomo (SHI) Demag’s sales engineer offered us a solution to our problem, we were rather sceptical,’ said Sascha Möhs, Managing Partner of elm-plastic. As a short-term solution the company had closed off some of the 32 cavities to achieve an even filling. ‘This was only temporary and rather inefficient, but it allowed us to eliminate all quality-related problems,’ Möhs explained.

Even the company’s long-standing supplier of electric injection moulding machines was not able to offer a long-term answer. Spending half a day at (SHI) Demag’s test centre in Wiehe was enough to convert the elm-plastic team. 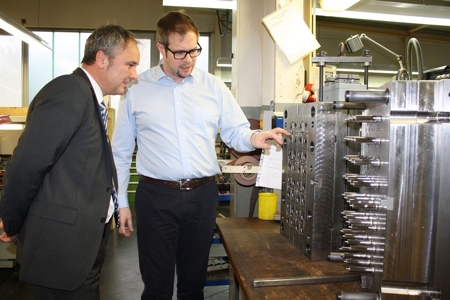 The 32-cavity mould and sample LLDPE material was sent on in advance and (SHI) Demag’s technicians prepared the setup in readiness for the arrival of Möhs and Lehnert. First up was the test on an all-electric IntElect machine without activeFlowBalance. The results looked familiar: cavities were filled unevenly, which meant that some injectors were not fully formed or were marred by burrs.

Prior to the next series of tests, the machine was equipped with activeFlowBalance. ‘It took only one series of tests to produce 32 virtually immaculate components,’ Möhs said. ‘After a few minor adjustments, we were decided: the IntElect machine with activeFlowBalance was our long-term solution. Although scheduled, we did not require a second day in Wiehe.’ An order for an IntElect with a clamping force of 2,200kN swiftly followed.

‘We realised that less was definitely more. We did not need higher clamping forces for these components. The activeFlowBalance feature ensures that all cavities are being filled evenly and that we fully meet our quality requirements while increasing our output rate by 50% compared with that of our injection moulding machines from other manufacturers,’ said Möhs.

Today, elm-plastic’s IntElect 220 is running smoothly in a certified cleanroom. The machine was integrated into the production data acquisition system (PDA) for maximum production transparency and versatility.

Initially, elm-plastic’s machine setters were apprehensive about operating the new machine. ‘But it did not take long before we had it figured out, and (SHI) Demag offered to provide us with advanced training if required,’ said Lehnert.