Advances in medical science have enabled contact lenses to be widely accessible and demand is growing. Today, there are estimated to be 125 million people who wear contact lenses globally. Sumitomo (SHI) Demag, a supplier of the machinery that produces the moulds for contact lenses, looks at the production process and trends

The biggest markets for contact lenses are currently North America, Asia Pacific and Western Europe, with the sector currently worth nearly US$15bn. Since 2011, there has been a steady increase in demand and the lens manufacturers, many of whom are based in Ireland, expect this trend to continue. “Much of this demand is driven by people who no longer want to wear glasses, as well as improvements in lens technology,” says Nigel Flowers, MD of Sumitomo (SHI) Demag UK. “When you have to wear glasses, it is a bit of a compromise, yet today it is easier to not accept those shortfalls.”

It is anticipated that extra demand for lenses will, in the near future, come from new regions – such as Latin America and Eastern Europe.

One mould for every lens

Because no two eyes are the same, there are a broad spectrum of styles and parameters to meet when it comes to the production of lenses. Every contact lens that is produced requires a bespoke mould, which is where Sumitomo (SHI) Demag’s injection moulding expertise comes in. Knowing that each lens must meet the highest levels of quality and cleanliness, it is essential that the moulds are repeatedly perfect too.

The process starts with the injection moulding of a front and base curve mould. This mould is then filled with a monomer (a molecule that can be bonded to other identical molecules to form a polymer) and is then closed and cured before the lens is then hydrated and packed.

“Every single mould used to make a contact lens is produced to a very high level of precision and cannot be reused,” says Flowers, who confirms that the discarded moulds are recycled – but not for lenses. “Because the final lenses are moulded against a surface that has already been injection-moulded, any imperfection within the mould will find its way into the lens,” he explains.

To accomplish quality and accuracy, Sumitomo (SHI) Demag installs its award-winning activeFlowBalance technology into machines that produce the contact lens moulds. This helps to combat uneven filling of multi-cavity moulds. “When we’ve got to a certain part of the fill and the materials are moving under their own inertia, we stop pushing and let the mould fill naturally. We are not forcing it in at high pressures and forces,” says Flowers.

The key is to ensure that companies can manufacture contact lens moulds repeatedly with the highest precision and cost efficiently. “For this reason, production using activeFlowBalance only really works on all-electric machines, such as the IntElect. That’s because we can repeatedly stop the screw in the right place to allow the mould to fill naturally. This intervention reduces the cavity pressure and stress in the material. Once one cavity fills it moves on to another one.” Typically, there are between eight and 16 cavities in each moulding tool.

While contact lens moulds are not technically classed as medical devices, any airborne contaminants, such as dust and particles from the raw materials, as well as human contaminants such as bacteria, could affect the lens function.

For the production of lens moulds, both all-electric and hydraulic injection moulding machines are used – with the bias heavily weighted (90% to 10%) towards all-electric.

Direct drive machines offer major improvements in efficiency, including a reduction of up to 75% in energy usage during operation and improved repeatability and cycle times. However, manufacturers of hydraulic IM machines have recently made big strides to standardise the process to accommodate the variations in moulds and still meet the high quality requirements.

Moulders venturing into this specialist sector may also opt for a self-contained cleanroom moulding and packing system to meet ISO Class 7 or 8 standards. “With these types of systems, moulders have the assurance that they’ll be fully compliant with any GAMP and FDA requirements and we would provide the required DQ, IQ and OQ documentation,” says Flowers.

Assistance is also on hand for machine validation, including the Process Design, Process Qualification and Continued Process Verification stages. Although this can be a time consuming activity, the validation process is critical to ensuring moulders have a stable and dimensionally centred process that consistently produces high quality lens moulds.

For easier cleaning, which is typically done daily, machines are often raised off the ground on feet. Special anti-static paint is also applied to the external walls of the machine to prevent airborne particles from sticking. Periodic deep cleans are advised. 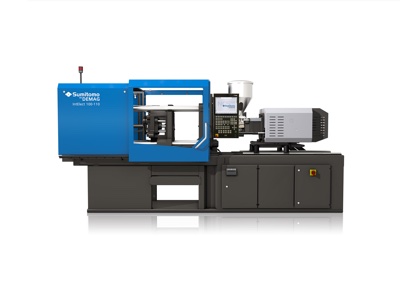 Automation equally plays a big role in maintaining cleanliness and efficiency levels, as well as reducing cycle times; each mould is typically produced in under three seconds. Tasks undertaken by these robots include unloading the mould tool and packing into sterile carriers.

The production process varies widely for lens mould manufacturers. Some specialise in making the lens moulds, which are then shipped globally in sterile conditions and the lenses are made closer to the local market. Others batch-mould the lens moulds and then store them before they are put through the next phase of production.

Right now only one Sumitomo (SHI) Demag UK customer has opted to automate the entire lens production process. Here, the IntElect injection moulding machine forms just one small part of a huge production line, whereby raw material is put in and the final product comes out the other end packed and ready to ship. “Packing and sealing the lens at the point of manufacture reduces the risk of contamination during moving and storage,” says Flowers.

There are obvious advantages and disadvantages to both approaches – expenditure and downtime issues being two concerns. The investment cost for the all-in-one solution is higher because of the level of complexity involved. Also, if there is a problem anywhere in the machine, the entire production line stops and no lenses are produced at all. With a batch approach, there is more flexibility and operators have the ability to stop the injection moulding machine and compensate somewhere else in the system.

“Continuous production might be more effective and efficient but the risks are higher,” notes Flowers. “In both instances preventative maintenance and management of downtime has to be well managed. It can be less disruptive to set aside a window every month to switch the machines off and action all the maintenance. This way you can pre-book your engineers. Alternatively, schedule checks for when you are switching moulding tools before production for another type of lens mould commences.”

Using the most state-of-the-art systems available is also a key consideration. For this reason production machines are typically upgraded every five years with new drive systems, controllers and other key components. “As well as reducing the risk of unscheduled downtime, these upgrades also ensure production rates are maximised – and, sometimes, improved – and costs are controlled,” says Flowers.

A variety of moulds are used in the production of contact lenses, representing the different magnification levels (graded in quarter diopters) that are prescribed for each lens. The differences are in the variation in the space thickness between the front and rear of the mould, which dictates the thickness of the lens. There are a finite number of combinations and standard number of magnifications and variations on the curve.

Nevertheless, production still has to be carefully planned and controlled, to ensure the highest efficiency levels are maintained.

In a relatively new development, bifocal lenses are now being manufactured on a larger scale to correct both near and far vision. With these lenses, the centre has a different magnification than the outer ring of the lens. In addition, some companies produce Toric lenses that are thicker or shaped at the bottom, which sit on the tears on the eye and they will rotate round. “If you’ve got astigmatism, the lens rotates and always ends up in the right place,” says Flowers. “All of this places greater challenges on the machines but breakthroughs are happening all the time,” he says. “We’ve not quite reached the point where we are 3D printing the lens according to someone’s eye, however this might be possible in the future.”

Did you know that the first contact lens can be traced back to 1887 and German physiologist Adolf Flick? The lens was made of glass and was called a ‘scleral’ lens because it covered the scleral – the part of the eye that is white. Some years later, in 1912, optician Carl Zeiss developed a glass lens that fitted over the cornea. The first plastic lens (manufactured from plexiglass) is believed to be the work of two scientists, who created the scleral lens in 1938. The first plastic corneal lens arrived in 1948.

Among the issues, these lenses deprived the eye of oxygen and slipped out of the eye too easily. Over time, however, the diameter of the lenses reduced to improve wearability and with the arrival of soft contact lenses (using hydrophilic gel) their popularity grew. So what lenses will we be wearing in the future? The next milestone could be smart lenses, which have the ability to monitor a user’s health through a series of circuits, sensors and wireless technology. Meanwhile, the military is looking into telescopic lenses that will allow the human eye to zoom.