Although a smaller event this year, Lounges 2015 provided a useful platform for the latest innovations

Lounges 2015 in Stuttgart was somewhat smaller in terms of exhibitors and visitors than last year’s event, but still provided a very comprehensive programme of talks and demonstrations of cleanroom products and best practice. Some 230 lectures, 52 demonstrations, 20 product shows and several panel discussions took place over the three days.

Held in conjunction with Vision Pharma and Innovation Food, an estimated 7,000 visitors (around 70% pharma and 15% food related) registered for the show. According to organiser Inspire Event Management, the numbers were down due firstly to this being the year that the triennial event Achema is held, and secondly due to the trend for many companies to attend such fairs every two years. A planned national railway strike also persuaded some visitors to stay away.

The organiser believes the 2016 show will be back up to previous numbers.

Next year’s show, (10 - 12 May 2016) will have a slightly different structure, focusing on the areas of clean environments, pharmaceuticals, food and biotechnology. It also aims to attract a stronger following in the medical and biotechnology sectors.

One of Germany’s major research institutions, the Fraunhofer IAP, supported the show once again with demonstrations and presentations. This year it looked at the potential for using flying drones in the cleanroom for mobile hygiene monitoring. The Institute is working on drones that carry built-in particle measurement technology to replace the current stationary systems. Their ability to hover a metre below the ceiling means monitoring could be undertaken without the need to disrupt services and requiring fewer personnel to enter the cleanroom.

The Institute also looked at risks for production contamination from airborne fibres caused by textiles when exposed to mechanical strain. Such particles have a high risk of spreading, especially in the turbulent ventilation in some production facilities. IPA experts looked at the causes of fibre formation and spread in cleanrooms and at methods to investigate and evaluate the risks.

Skan demonstrated its wireless glove tester for isolators and RABS in the pharmaceutical industry. The Wireless GT is designed to be easy-to-use for on-the-spot testing. Cleanroom compliant, it allows the testing of several gloves simultaneously. The system works without any tubes or wires; all the functions needed are integrated in the battery-powered device. The method consists of monitoring the pressure loss of the glove over a specific period.

Berner showed the latest extension to its new generation of safety cabinets. The Claire safety cabinet uses 97% less energy than standard cabinets and has won several awards for its slender ergonomic, ecodesign. Features include automatic switching to energy saving mode when not in use, the reduction of power from 500W to 85W and low noise levels. It also has a touch display central interface displaying data from external equipment such as particle counters.

The latest addition is an integrated safety waste disposal unit direct from the safety cabinet. It has a gas-tight seal which is sensor-controlled, thereby avoiding cross-contamination. 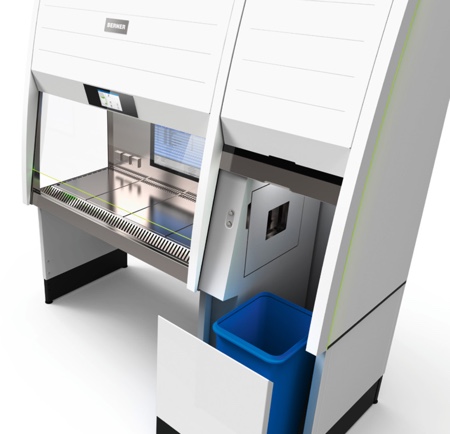 HET Filter showed its latest developments in terms of filtration, explosion protection and containment. As the pharmaceutical and chemistry sectors produce ever more potent products, the cleanness requirements for room air in production facilities increase. To ensure a high level of protection, the filter systems from HET Filter meet the requirements of the highest OEB level 5.

Flecotec, a supplier of flexible disposable containment products, showed the Flecozip (Flexible Containment Zip) a novel system that offers contamination-free docking, storage and transfer of toxic or sensitive bulk solids. Its basic component is a patented, split zip fastener that joins two separate connections together in an airtight and dust-free way.

Austrian maker of liquid process equipment, ZETA Biopharma, meanwhile, unveiled its new hygienic BM magnetic agitator, which has improved ability to run dry. ZETA has supplied more than 2,000 of its magnetic agitators to some 150 companies around the world, mostly in the pharma and biotech sectors, but also in the food industry.