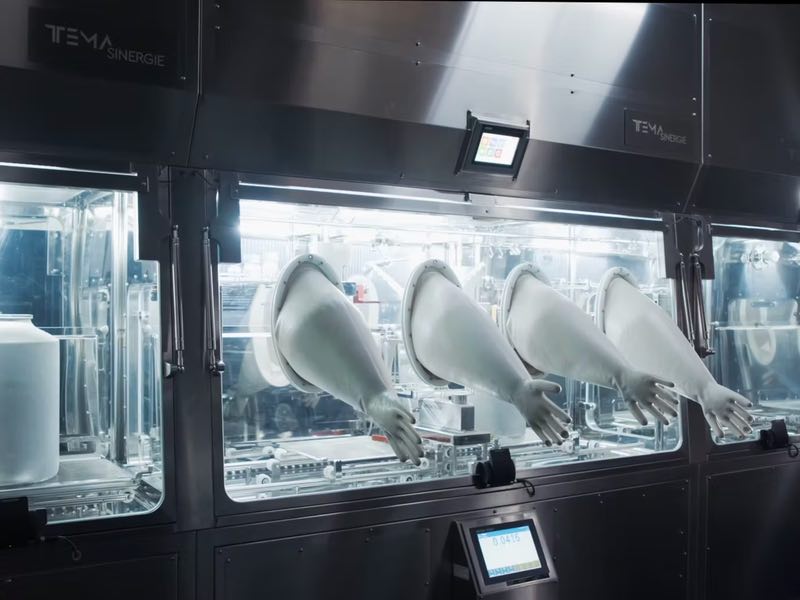 The Aseptic Sampling Isolator (AP-IS Series) was developed in response to the need for aseptic sampling of large quantities of sterile active ingredients and for handling large containers.

The new isolation system designed specifically for sampling large quantities of sterile powders (API) in an aseptic environment consists of a large process chamber combined with two transfer chambers on the side.

The process chamber is equipped with instrumentation suitable for powder sampling and monitoring environmental conditions, as well as with a custom-made system for automatic lifting and handling of large containers.

The first Aseptic Sampling Isolator was recently installed and validated in Spain as part of a custom project for one of our major customers.

The new offering was specifically designed to perform sterile powder sampling (API) with a high degree of precision, without altering the sterile conditions of the incoming active ingredients.

To these two starting requirements, which can be considered a standard for processes of this type in the pharmaceutical sector, a third one has been added, which in fact distinguishes the project and makes the isolator a truly unique pharmaceutical isolator in terms of features and functionality.

The Aseptic Sampling Isolator was conceived for sampling activities in an aseptic environment, but its performance makes it perfectly suitable for various processes requiring a Grade A/ISO 5 environment

In fact, the customer not only needed to sample active ingredients under sterile conditions, but also needed to handle containers of considerable size and weight.

Not an easy request to fulfil, given the technological features of pharmaceutical isolators and the engineering complexity involved.

Tema Sinergie’s response was to build a suitably sized 4-glove process chamber, offering a large workspace with a high degree of asepsis, i.e. a Class A/ISO 5 environment in accordance with cGMP directives.

Inside the process chamber, all the instruments required to best perform sampling activities have then been integrated, starting with a precision analytical scale, which can be used from an operator panel installed on the front, outside the isolator.

Each Transfer Chamber is independent of one another and can work in both directions, allowing both the introduction and extraction of materials transferred to the central part for sampling operations. This allows the operator to introduce two different containers at the same time and thus manage two different manufacturing processes independently and simultaneously. This solution, together with the central position of the scale, offers a great advantage to the user, allowing optimisation of process times.

From an engineering point of view, the most complex part was the realisation of an automated handling system capable of managing large containers, without compromising the overall ergonomics of the system.

In particular, the critical points concerned the transfer of the container from the Transfer Chambers to the Process Chamber and handling the container in a predetermined position for sampling operations.

For the first point, a solution was implemented using two sliding carriages handled manually, one in the Transfer Chamber and one in the Process Chamber, which mechanically join together, allowing the container to be easily moved from one chamber to the other.

For the second point, on the other hand, an automatic lifting and positioning system was designed which, by means of electric and pneumatic actuators, picks the container from the carriage and positions it on the Process Chamber work surface. At this point the container is in place so the operator can carry out manual sampling operations. Once the sampling activity is complete, the process is carried out in the opposite direction to allow the container to be extracted.

The Aseptic Sampling Isolator was conceived for sampling activities in an aseptic environment, but its performance makes it perfectly suitable for various processes requiring a Grade A/ISO 5 environment.