UK industry is currently beset by high business costs, overly cautious lending and government austerity measures. But some support for r&d has been forthcoming through recent UK Government funding and tax credits, while regional grants are encouraging investment in some areas. The pharmaceutical industry accounts for 60% of r&d spending in the UK, but other sectors such as healthcare, automotive and the space industry, are offering opportunities for cleanroom suppliers.

The UK may have the world’s sixth largest economy, but its economic focus for the past decade has been on financial services at the expense of manufacturing. Only now, following the banking crisis, is consideration being given to whether the UK might benefit from a more robust manufacturing industry. Funding that would boost sectors such as pharma, life sciences, medical devices, electronics and aerospace would certainly be welcomed by UK cleanroom designers and suppliers.

The life sciences sector is a highlight in an otherwise lacklustre performance from UK industry, which is currently beset by high business costs, overly cautious lending and government austerity measures. The ever more inter-dependent life science, pharma and biotech sectors have found it increasingly costly to maintain or build large facilities in Europe, but some support for r&d has been forthcoming through recent UK Government funding and tax credits.

The UK boasts one of the highest shares of global pharmaceutical r&d expenditures, after the US and Japan.1,2 And according to a recent issue of parliamentary publication Science in Parliament, the UK pharma industry with an annual turnover in excess of £50bn, has grown faster over the past decade than any other sector – apart from finance and insurance, that is.

The Association of the British Pharmaceutical Industry (ABPI) says that the pharma industry accounts for 60% of r&d spending in the UK but notes that the model is shifting from in-house discovery to one based on collaboration and partnership. This is exemplified by the joint venture between GlaxoSmithKline (GSK), the UK Department of Business, Innovation & Skills, the Wellcome Trust, the East of England Development Agency and the UK Technology Strategy Board. The £38m development is an independent bioscience campus designed to provide small biotech and life sciences companies and start-ups with access to the expertise, networks and scientific facilities traditionally associated with multinational pharmaceutical companies.

The ever more inter-dependent life science, pharma and biotech sectors have found it increasingly costly to maintain or build large facilities in Europe

These sectors also benefit from the unusually large contribution of UK medical charities, with funding of more than £1bn annually. Cancer Research UK alone spent £332m on research in 2010–11. Such wealth gives them some influence and the continuing complexity of research regulation has led them to push for the establishment of a single UK regulator to speed up research.

It was one of several promises made by GSK after the Government offered so-called “patent box” legislation that would, beginning in 2013, cut to 10% the corporate tax rate on profits from products invented in the UK. Additionally GSK said the tax break would “lead to the construction of a new facility at the University of Nottingham focused on ‘green chemistry’ technology”.

The UK Government also hopes to maintain a strong position in regenerative medicine research with the opening of its £30m Cell Therapy Centre this month. 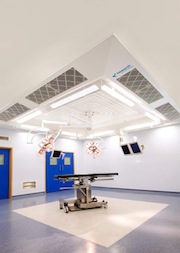 The latter pressure on space, particularly at ceiling level, is offering an opportunity for UK-based engineering company Howorth Air Technology. The company has developed a new Screenless Exflow Ultra Clean Canopy to complement its existing Exflows range, improving the performance of the systems without the need for the partial walls or the additional requirement of low level recirculation ducts, remote fans or cooling coils.

The coverage of the NHS is more comprehensive than many other health systems, yet it is largely impenetrable when it comes to supplying products to it. Speaking at a recent event organised by the ABPI, Bettina Fitt, general manager, UK and Ireland, GE Healthcare, called on the Government to create an environment where the public and private sector can work together to roll out more widely innovations that have proved successful in one area within the NHS.

As a supplier to the NHS through its consumables business cleanroomshop.com, Connect 2 Cleanrooms’ marketing manager Sean Fryers speaks for many when he says it would be desirable to see the tendering process simplified: “While we understand it has to be thorough, it is currently a very lengthy process, involving many different people, and requires very time-consuming and costly plans – which, in the end, may come to nothing.”

In semiconductor manufacturing, the UK has few large volume electronics facilities or FABs, but it does have a thriving chip development and design presence. In many instances, these are small companies carrying out r&d and licensing IP rather than manufacturing and selling actual semiconductor chips.

That does not stop the UK cleanroom sector winning contracts abroad, however. Connect2Cleanrooms has just completed a project for a Maltese visual inspection company looking to support further expansion into the electronics and pharmaceutical sectors. The Malta-based company undertakes work for many European OEMs and their suppliers, such as the inspection of rubber seals for Formula 1 cars. The investment in cleanroom facilities will increase the scope of work that it can offer the electronics and pharmaceutical sectors. 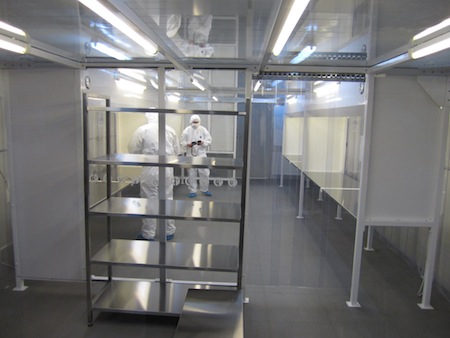 Connect 2 Cleanrooms’ Fryers says the difficult economic climate has made UK companies look to diversify and invest in facilities to stay ahead of the competition. However, they are cautious with investment: “In today’s economic climate people are making more informed decisions and understanding what they want more from the ISO standards, and they are looking further afield for design solutions.”

The UK’s aerospace industry is the second-largest with an annual turnover of around £20bn4 and is set to benefit from £6m of Government investment in collaborative r&d projects. Among those winning recent contracts is Astrium, which has been chosen by the European Space Agency (ESA) to spearhead the construction of the Sentinel 5 Precursor satellite (S5p), which will monitor the chemical composition of the Earth’s atmosphere from 2015.

Two other UK-based satellite firms also plan to open their new joint headquarters in Lincolnshire this May. Linwave Technology and Microwave Marketing are building a facility in Lincoln that will include cleanroom environments for manufacturing. The companies, which primarily operate in the satellite and defence industries, hope to move to their new 11,000ft2 site next month.

In spite of a decade of sell-offs in the UK automotive sector, the industry remains significant to UK manufacturing, employing more than 800,000 people, with a turnover of some £52bn, generating £26.6bn of exports. Nissan’s recent announcement that its new compact model car will be produced in Sunderland is a welcome investment for the many component suppliers. Nissan is one of several businesses in the automotive sector to receive conditional offers from the £2.4bn Regional Growth Fund (RGF), which aims to support projects that will create jobs in hardest hit areas of England.

Other parts of the UK are also receiving funding support. For example, business minister Edwina Hart and Port Talbot-born biotech millionaire Sir Chris Evans outlined the plan at the recent BioWales conference in Cardiff to provide around £100m support for the medical technology and pharmaceutical industry in Wales. It is expected the funding will come from both the public and private sources. There are around 330 life science companies in Wales contributing more than £1.3bn to the Welsh economy.

Scotland too plans to build on its already thriving life science sector.

Originally planned to be privately funded, Scottish Enterprise and the UK Government’s Department for Business stepped in following the financial crisis to fund the construction of the Edinburgh BioQuarter in a 50:50 joint venture. The BioQuarter has already signed a deal with GSK to develop medicines to treat acute pancreatitis and is now recruiting other firms.

A framework agreement between Siemens Technology Accelerator and Scottish Enterprise, announced in February, will also mean more opportunities for start-up companies to be in created Scotland.

On the consumables side Tristel, the UK-based manufacturer of infection control, contamination control and hygiene products, has reported revenue growth of 10.9% to £5.1m for the six months to 31 December 2011, driven largely by overseas sales.

Commenting on current trading, Paul Swinney, chief executive of Tristel, said: “The revenue growth achieved in the first half augurs well for the future. Our UK hospital infection control business increased sales of instrument disinfectants by 23.2% in the areas that we focus upon today of ENT (Ear, Nose & Throat), urology and cardiology.”

The company was buoyed by three areas in which it invested heavily in last year: operations in China and Germany and the manufacture and sale of contamination control products to pharmaceutical and personal care manufacturers, which together generated £396,000 in sales compared with £49,000 in the previous year.

The Cambridgeshire-based company is striving to create a world-class manufacturing facility for the specialist disinfecting and cleaning products, including the capability to manufacture such products in sterile cleanroom conditions.

In February, UK textile services firm Berendsen also posted a higher full-year profit and said it expected to deliver a better performance in 2012, as it benefited from a recent restructuring and the acquisition of a Scandinavian cleaning business.

Berendsen, previously known as The Davis Service Group, supplies and cleans uniforms for persons in cleanroom, healthcare, hospitality, manufacturing and hazardous environments through 75 service centres in the UK, Ireland, and across Europe. Revenue at the company, whose operating units trade under the main brands of Berendsen, Sunlight and Spring Grove, rose marginally to £992m.

Berendsen, which also offers rest room cleaning and resupply services, acquired the Scandinavian washroom business of ISS in 2010. The company, which streamlined its business in 2011, said it entered 2012 in good shape, with the benefits of its strategic initiatives gathering momentum. It posted a full-year adjusted pretax profit of £111.8m (£175.54m), compared with £97.1m the year before.

Despite Europe’s economic difficulties, the overall picture of the UK cleanroom sector is one of steady growth.