The science of chlorine-based disinfectant

When selecting the ideal cleanroom disinfectant there are many criteria to consider and a good understanding of the product characteristics is essential. Karen Rossington takes a look at the historic development and latest advancements in chlorine disinfection

Taking as a given good broad spectrum efficacy, including highly resistant bacterial spores, the requirements for the ideal cleanroom disinfectant are quite lengthy: a sterile option for grade A and B environments;1 non-inflammable so can it be used over large areas with no health and safety concerns; also fast drying with short contact times to reduce the time taken for biodecontamination. However, in our ideal world this cannot be traded for problems with equipment or our operators, or the wider environment in terms of disposal.

The requirements for the ideal cleanroom disinfectant are quite lengthy

Another requirement is that cleaning processes leave no disinfectant residue or, as a minimum, free rinsing residues. This is because no residue means there is no need for residue removal and this, in turn, can shorten the decontamination process. The product will need to have in excess of a 12 month unopened shelf life and in excess of three months in-use shelf life to be practical to store and use. This ideal disinfectant would then need to be manufactured to the requirements of cGMP, be notified to the BPR2 and provided in cleanroom compatible packaging in a variety of formats so that it is suitable for use in all areas of the cleanroom.

It goes without saying that this all needs to be achieved in a cost-effective formulation. Many people believe that this ideal sporicide does not exist and a compromise must always be made.

One of the first known uses of chlorine for disinfection was in the form of hypochlorite known as chloride of lime. Snow used it in 18503 after an outbreak of cholera to attempt to disinfect the Broad Street Pump water supply in London. Berthollet, in 1785, prepared a bleaching agent by dissolving ‘Scheele’s gas’ in water and in 1789 improved it by mixing it with a solution of caustic potash (KOH). This was carried out in a French chemical plant in Javel and is still know as Javelle water to this day. A short while later Labarraque replaced the expensive potassium hydroxide with caustic soda; this development resulted in what was probably the first use of sodium hypochlorite as bleach.

Chlorine first began to be used as a disinfectant in the late 1800s to early 1900s. Liquid bleach – sodium hypochlorite – came into widespread use in the 1930s and today it is the most widely used of all the chlorinated bleaches. Hypochlorite solutions were used for the treatment of open wounds during World War I and led to the use of on-site generation of hypochlorite in hospitals. These went out of favour until the 1990s, which saw a great surge in the interest of on-site generation of chlorine.

These on-site generators provide a solution containing only 0.8% chlorine, which is non-hazardous; however, hazardous hydrogen gas is produced as a by-product. On-site generation is also quite inefficient compared with bulk production and has high associated electricity costs.

Dry calcium hypochlorite appeared on the US market in 1928. This bleaching agent contains up to 70% active chlorine and is also known as High Test Hypochlorite. It is available in a variety of forms including powder, granules, briquettes and tablets.

Chlorine as a disinfectant

Not all chlorine species are equally effective as disinfectants. Many studies have explored the mechanism of chlorine disinfection and although it is not possible to explain precisely how each particular chlorine species works, current theory4 believes that inactivation occurs by means of one or more of the following mechanisms: inactivation of the key enzymes; disruption of nucleic acids rendering them non-functional; and oxidative damage to cell walls or other vital cell components. For each of the mechanisms described above the effectiveness of each disinfecting agent is a function of both its rate of diffusion through the cell wall and it reactivity with the cell wall, proteins and nucleic acid.

Hypochlorous acid (HOCL) is the most effective disinfectant in the chlorine family available in dilute solution. It is suggested that HOCL is 80 to 120 times more efficacious than sodium hypochlorite.5 Because HOCL has no charge and has a relatively low molecular weight it is better able than the other chlorine based disinfectants to penetrate the cell walls. It also reacts more rapidly than other chlorine-based disinfectants to oxidation reactions with organic matter, i.e. the critical components of microbial cells. Conversely the hypochlorite ion is a relatively poor disinfectant because of its inability to diffuse through the cell wall. Since it is negatively charged it is electrostatically repelled from the cell walls, which are also negatively charged. It is much larger in size than an HOCL molecule so it also diffuses more slowly due to its larger size.

Hypochlorous acid (HOCl) is a weak acid that further dissociates into the hypochlorite ion (OCl-) and hydrogen ion according to the following equation:

These three species exist in an equilibrium which is both pH and temperature dependent; the sum of these is referred to as the total available chlorine. At 25°C and pH 7.5, half of the total chlorine is present as HOCl and the other half as OCl-. The dissociated hypochlorite ion (OCl-) predominates at higher pH values, above 7.5, while the undissociated hypochlorous acid (HOCl) predominates at lower pH values. At pH 5, nearly all the chlorine is present as HOCl, while a pH value of 10 drives nearly all the chlorine to be present as OCl- (see Figure 1). At low pH and high chlorine concentrations the hydrolysis is not complete and a significant fraction remains in the form of molecular chlorine Cl2. 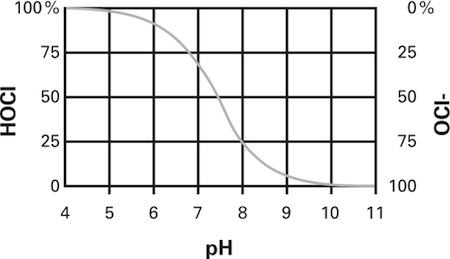 Figure 1: The species exist in an equilibrium which is pH and temperature dependent

In a sodium hypochlorite solution which normally sits at a pH of 11–13, all available chlorine is in a form of hypochlorite ions (OCl-) which, as previously discussed, is far less efficacious than hypochlorous acid.

Advances in chlorine chemistry have led one company to stabilise a solution based on calcium hypochlorite, at a pH of 3.5–5.5 so all available chlorine is in the form of hypochlorous acid with a shelf life of 18 months. This product is available to the pharmaceutical industry as Contec ProChlor.

If the science was correct this product should be more efficacious and faster acting than the equivalent sodium hypochlorite product. To validate this, Contec carried out the usual panel of TEC 309 EN disinfectant tests. Table 1 shows a summary of these results for a 2000ppm active chlorine solution. Complete kill against spores was achieved in both clean and dirty conditions against a modified EN 13697 surface tests in one minute. This is a significant increase when compared with sodium hypochlorite in both the log reduction achieved and the kill rate. 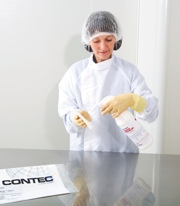 Various micro-organisms have been tested including a particular resistant house isolate which was “typed” as P. glycolyticus. Test work was also repeated against the newest version of EN 16506 for fungi and moulds, which has a requirement for >75% of the A. niger (now A. brasiliensis) spores to be in the form of “spiny spores” which are more resistant.

Due to its low pH and available chlorine concentration, the product also carries no hazard and thus requires no specialised PPE or disposal consideration. It is non-corrosive and current testing shows good compatibility with cleanroom materials.

Although not residue-free, because a small amount of residual calcium salt will remain, it is free-rinsing and present at very low levels. A residue on evaporation result (EP) gave 1200ppm per ml compared with 4500ppm for a quat or 21,368ppm for sodium hypochlorite.