Today, manufacturers and engineers are aware of the downfalls in aqueous cleaning systems and have a renewed interest in vapour degreasing cleaning systems. Advances in solvent technology are leading to environmentally acceptable cleaning options that also greatly minimise bioburden issues.

Vapour degreasing systems consist of a top-loading steel vessel composed of two chambers, both filled with solvent. In one chamber, the solvent is heated to a boil, which then generates a vapour cloud that rises to meet two sets of cooling coils. These cooling coils cause the vapours to condense and return to their liquid state.

This liquid is then channelled back to the second chamber, the rinse chamber. This closed-loop system has few moving parts and ensures that the solvent is reliably clean for ongoing cleaning needs. 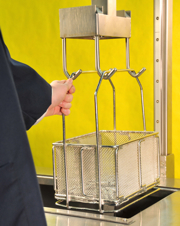 A hoist lowers a basket containing the dirty parts through the vapours and into the boil sump. After being raised back up, the basket is lowered into the rinse sump

A hoist lowers a basket containing the dirty parts through the vapours and into the boil sump first. After being raised back up, the basket is lowered into the rinse sump. The rinse sump always contains the clean solvent that has been condensed from the vapours. The use of ultrasonics can further ensure residue-free clean parts.

This process is easily programmable and allows for excellent process control and repeatability. The parts come out clean, dry and immediately ready for packaging or further processing. Compared with aqueous systems, the advantages of the vapour degreasing system are clear: they are very easy to use, efficient, smaller in size and design, and lower in overall capital and operating costs.

A way to combat bioburden

The low viscosity and surface tension ratings of solvents, combined with their volatility, allow them to clean very effectively, even in small crevices and areas that water in aqueous systems cannot easily penetrate. This is especially important for medical device designers, because it means they are not limited in product design as they may be with aqueous systems. They can be sure that all surfaces of the finished product will be effectively cleaned and safe for the patient.

Solvents are inherently hostile to the growth of bacteria, and offer an easy way to engineer and validate bioburden issues out of the manufacturing process

Solvents dry quickly and completely, leaving no moisture or residue on parts after they exit the vapour degreaser. Solvents are inherently hostile to the growth of bacteria, and offer an easy way to engineer and validate bioburden issues out of the manufacturing process. This is a significant difference from water-based cleaning systems, especially when components or finished devices are packaged immediately after cleaning. Even trace amounts of moisture can allow the growth of bacteria and create related bioburden issues, compromising the ability to properly sterilise the device. This can require re-cleaning of the device or disposal of it altogether.

With aqueous systems, relatively complex process controls must be established to ensure the water used does not harbour bioburden. Also, the rinsing and drying process is much more complex; blowers or heated dryers are often used to reach nooks and crannies, and even then, spotting or corrosion of parts can be a problem if any steps in that process are not properly engineered. These factors significantly increase process validation and ongoing process control costs. Blowers or heated dryers also require additional expense and energy to operate.

Vapour degreasers offer a simple process that is more chemically effective at removing contaminants compared with aqueous systems, which means that they do not require additional mechanical action or increased temperatures to be effective. The typical aqueous setup will probably have complex ultrasonic or high-pressure spray systems or mechanical agitation systems in addition to heaters to raise temperatures of the detergent baths. When dealing with thick or insoluble contaminants, or delicate parts such as those in medical devices, the functionality of an aqueous system can be significantly limited.

As mentioned earlier, about 15 years ago, environmental concerns and new regulations led to a shift away from solvent-based vapour degreasing cleaning systems toward aqueous systems. There was no question that solvents were not effective; however, at that time they either had toxicity issues or contained chloro-fluorocarbons (CFCs), which were found to contribute to ozone depletion and were eventually banned. Manufacturers turned to aqueous systems to meet those environmental requirements.

Intuitively, water would at first appear to be the more environmentally friendly option. However, there are a number of reasons why the advantages are not so clear cut. Today’s solvents meet strict environmental standards and Registration, Evaluation, Authorisation and Restriction of Chemicals (REACH) requirements. Although some solvents are a regulated waste and require special disposal, this is actually comparable to aqueous system requirements. In fact, aqueous cleaning systems generate a waste water stream that requires treatment before discharge. Many aqueous detergents contain non-biodegradable ingredients, which can make discharge to sewer systems or surface waters problematic. For example, some cleaners are biodegradable when new, but are not once used.

Water used in aqueous systems does not come straight from the tap, it virtually always needs to be pre-treated in some way to be viable for use as a cleaning agent. This is necessary to ensure there are no trace materials, minerals or pre-existing bioburden issues that would compromise the effectiveness of the process. In contrast, solvents come ready-to-use and require no mixing. 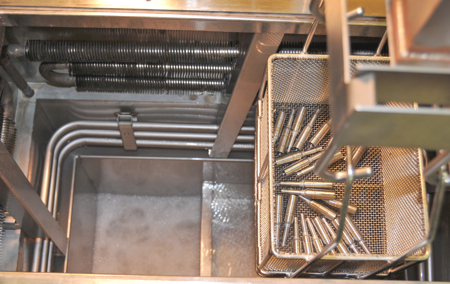 If we look beyond the actual cleaning agent (water vs solvent) to assess the overall sustainability of a manufacturing process, vapour degreasers have significant advantages to consider. The energy required to operate a well-engineered vapour degreasing system is lower than that for an aqueous system.

Aqueous systems require high temperatures to be effective, while solvents have lower boiling points and therefore use less heat energy. Drying parts after aqueous cleaning requires an additional step in the process, while parts exiting a solvent-based vapour degreasing system come out dry. This lowers the required energy use in the facility. And the process controls required to eliminate bioburden issues add significantly to the complexity and costs of the cleaning process.

Aqueous cleaning processes operate horizontally and contain many moving parts, which means the machines and overall systems have a larger footprint, requiring more overall space in a cleanroom and, therefore, also requiring more electricity and consumption of energy. Vapour degreasing systems, on the other hand, work vertically, taking up little space in a cleanroom and require less energy than aqueous systems. This is not only an environmental benefit – it is also a cost benefit for a manufacturer who is leasing space and paying the utility bills.

As described above, many of the overall effectiveness and environmental benefits of vapour degreasing systems turn out to have cost benefits for the manufacturer.

Because of the complexity of the aqueous cleaning process and reliance on equipment as opposed to the cleaning solution, the initial effort required to correctly design, test and install an aqueous cleaning system is much greater than that for a vapour degreasing system. This additional effort required is very significant for manufacturers that are short on time and can increase the overall cost of the process.

Aqueous systems typically require a larger footprint in the manufacturing facility, which requires more space. This also means that it requires more supervision to ensure effectiveness. Vapour degreasing systems are low maintenance and much of the process can be automated, using programmable process controls and hoists that require very little oversight for operation.

Conversely, many companies specifically assign a manufacturing engineer to monitor and ensure the aqueous process’s chemistry is on target or adjustments are made on a daily basis. A solvent vapour degreaser’s chemistry is consistent and requires little attention. The savings on labour costs provided by vapour degreasing systems can be significant compared with aqueous systems.

While the up-front cost for solvents appears to be more expensive than water, which is often perceived as free, a closer look shows that this is not the case. The costs associated with pre-treating the water and then also treatment prior to disposing of the dirty water after cleaning can add up. When coupled with the higher supervision needs and increased facility footprint, the cost benefits of ‘free’ water may not have such a great impact.

Finally, bioburden that can form when devices are packaged with residual moisture is a issue with aqueous systems, but not with solvent-based systems. For a manufacturer that has used an aqueous system and has had to re-clean, re-package or scrap devices that have been affected by bioburden, the vapour degreaser system can offer significant savings in time and money. It can also ensure that patients and doctors who receive products down the line are completely satisfied with their sterility and safe use.