Highlights of new products that made their debut last year 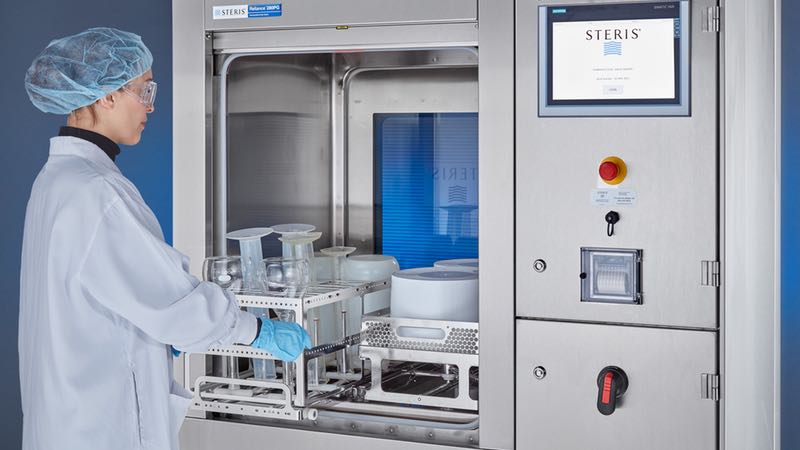 2018 saw hundreds of product launches from equipment manufacturers and cleanroom consumables makers; many were introduced to the market at trade shows around the world.

This review takes account of some of the most relevant products to contamination control, and also takes a look at the R&D projects that are set to revolutionise the cleanroom technology landscape.

Also at the show, Metall+Plastics, a brand of the German group Optima, debuted Stiso, its new sterility test isolator. The unit uses catalytic air circulation and the new DECOjet technology to achieve short cycle times during decontamination. The manufacturer said Stiso is low maintenance thanks to its H2O2 flash evaporation. The unit is available for aseptic and aseptic-toxic applications.

Exhibiting at ACHEMA 2018, Telstar Life Science Solutions, the Barcelona-based construction and engineering company, presented novel analytical technologies for pharmaceutical freeze-drying systems and aseptic manufacturing processes. The Sapphire capacitance diaphragm gauge, a sensor to measure vacuum in steam sterilisable GMP freeze-dryers, was presented to the market for the first time at the show.

Priorclave also made a debut at ACHEMA 2018. The British sterilisation specialist exhibited its 100-litre chamber laboratory autoclave, which is among the most energy efficient currently available, the company claims. The Priorclave QCS EH100 autoclave features a horizontal cylindrical chamber with a large diameter, bringing added versatility such as the facility to sterilise both smaller and taller than usual items. 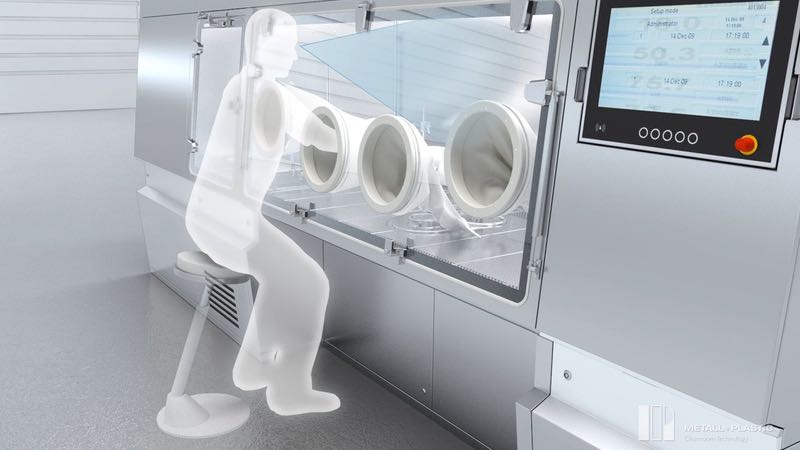 On the consumable front, UK's Unigloves expanded its product line with a nitrile glove with antimicrobial protection. The product, a new fortified single-use glove, incorporates BioCote's silver ion technology, which is scientifically proven to destroy 90% of harmful bacteria within just 15 minutes and 99.5% in only two hours. The company announced the launch in January of last year.

Five months after that, Hartalega Malaysia and Chemical Intelligence UK announced the European launch of what they claimed was the world’s first non-leaching antimicrobial medical glove.

The “game-changer” medical glove is the first ever to contain a new active microorganism-killing molecule designed to prevent the spread of bacteria to and from surfaces and people.

With the biotech built into the glove, it does not need applications of further solutions or chemicals. Bacteria coming into contact will be exposed to the antimicrobial activity which, in independent testing, achieved up to a 5-log (99.999%) kill within just five minutes of contact, the company said.

The unit, the company said, offers cleanroom operators a novel solution to tracking particulate contamination down to 5 microns. The PFO 1040 uses a robust and reliable direct imaging technique (patent pending GB2553830 and WO2018/051101). 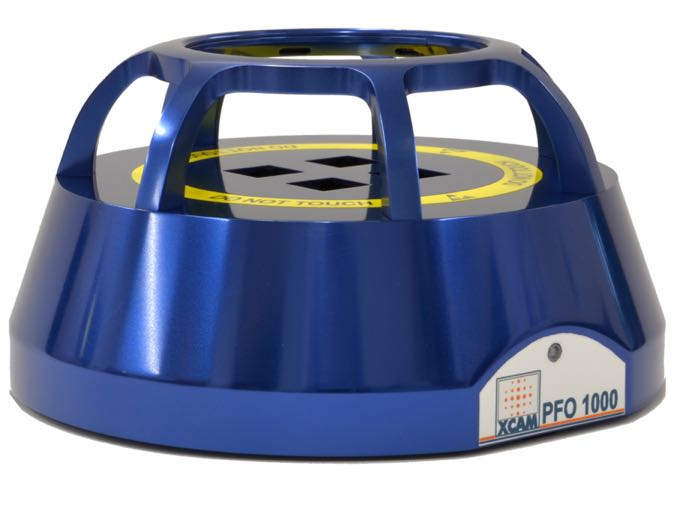 A bespoke algorithm analyses particles and fibres that settle on four CMOS sensor, each with an area greater than 1 cm2, and reports data such as size, shape, particle/fibre classification and particle size distribution; as well as allowing individual particulates to be interrogated within the resulting image. This method allows sample rates of 10 measurements per hour, allowing contamination events to be reported in real-time and consequently improving manufacturing processes and production yields.

The Peroxcap HPP272 is a 3-in-1 probe (hydrogen peroxide, humidity, and temperature) that has been boosted by specifying the ppm measurement accuracy in a wide temperature range, varying from +5°C to +50°C.

Granted by Germany’s Fraunhofer Institute for Manufacturing Engineering and Automation, the IPA Fraunhofer Tested Device is a certification mark for products that have qualified under recognised standards and guidelines regarding their cleanroom compatibility.

The BCPS is a completely prefab wall and ceiling system, including windows and doors. Brecon claims the system makes the assembly of cleanrooms considerably more efficient and affordable. Thanks to the pre-made building elements, doors and windows, the building process is not only faster but also much cleaner, the company said.

Nanotechnology is slowly picking up interest across hi-tech industries and Dutch nanotechnology company VSParticle made headlines last year with its revolutionary Nanoparticle Generator. With the push of a button, the groundbreaking device and its technology make possible the development of completely new materials, products and processes in a variety of industries with application in the semiconductors, batteries and sensors.

The device works on a scale of zero to 20 nanometers —sizes that competing solutions cannot produce— and can create, and also print, materials with quantum properties. It enables users to play with the possibilities and to invent entirely new materials or discover new applications. Examples include phone sensors that measure air quality, tiny solar panels for device charging, phone batteries that never run out or even, the enabling of hydrogen cars.

Innovation in the making

2018 saw revolutionary advances for infection control. Scientists at RMIT University in Australia developed the NanoZyme, an artificial enzyme. Made from tiny nanorods, which are 1,000 times smaller than the thickness of the human hair. NanoZymes use visible light to create highly reactive oxygen species that rapidly break down and kill bacteria.

On the microbiology front, scientists at the Technical University of Munich have developed a microarray rapid test to speeds up detection in case of a Legionella pneumophila outbreak.

A typical test for Legionella involves putting a water sample in a Petri dish, then waiting 10 to 14 days to check if bacterial cultures grow. Finding the source of the Legionnaires' disease outbreak is crucial to preventing further infections.

To speed up detection, the team of researchers developed a measuring chip in the context of the LegioTyper project funded by the German Federal Ministry of Education and Research.

This chip not only detects the pathogen Legionella pneumophila, but also identifies which of the approximately 20 subtypes is present. The results are delivered in about 35 minutes.

In Singapore, a new nano coating with antimicrobial properties has been developed by scientists who have taken inspiration from the structures of the dragonfly wings.

Studies have shown that the wings of dragonflies and cicadas prevent bacterial growth due to their natural structure. The surfaces of their wings are covered in nanopillars making them look like a bed of nails. When bacteria come into contact with these surfaces, their cell membranes get ripped apart immediately and killed. 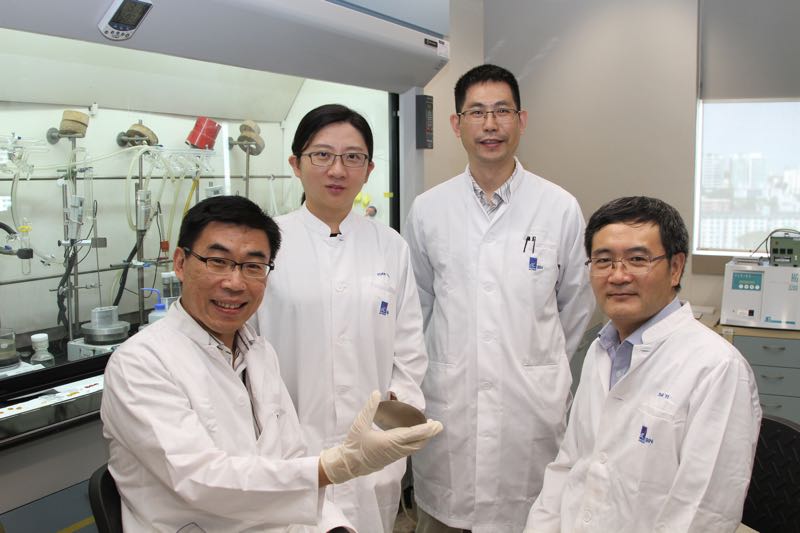 Inspired by such structure, the researchers have invented an anti-bacterial nanocoating for disinfecting frequently touched surfaces such as door handles, tables and lift buttons.

This technology will prove particularly useful in creating bacteria-free surfaces in places like hospitals and clinics, where sterilisation is important to help control the spread of infections.

Tests on ceramic, glass, titanium and zinc surfaces showed that the coating effectively killed up to 99.9% of germs found on the surfaces. As the bacteria are killed mechanically rather than chemically, the use of the nanocoating would not contribute to environmental pollution.

Without a doubt, new product development has been an important driver moving the industry forward.

N.B. This article is featured in the January 2019 issue of Cleanroom Technology.