Aseptic manufacturing: The robots are coming 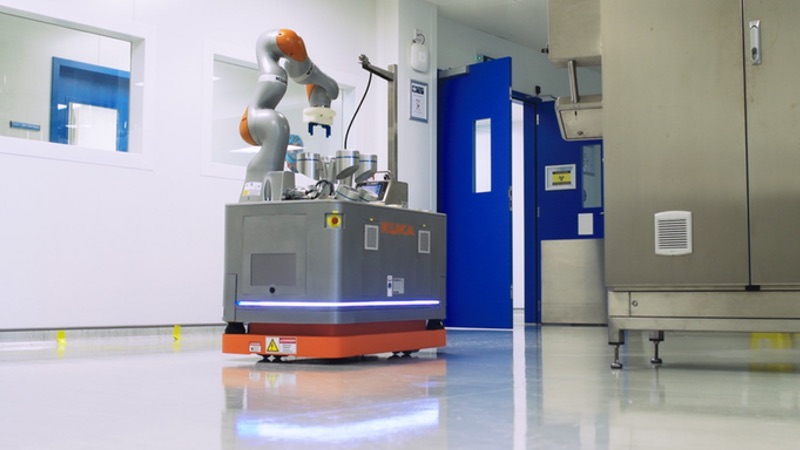 Autonomous robotics have become commonplace in the automotive and other industries, while their adoption within pharmaceutical facilities has been slow. There are underlying reasons for this, but current collaborations between industry and academia are actively addressing these, and its results herald the onset of the autonomous robotics era in this highly regulated industry.

At University College Dublin (UCD) autonomous robots are being adapted for environmental monitoring (EM) activities within pharmaceutical facilities. The first step was to adapt the robots to allow them to easily and accurately expose and retrieve Petri dishes, as shown in the video below.

While this first milestone has been achieved, some of the associated problems that need to be solved are now becoming apparent. Follow the link to find out more.

Finding their way around the facility was the first challenge to address. The advent of autonomous robotics means the days of laying cable in the ground are coming to an end. While there are a number of ways of directing these next-generation robots, this project is focusing on two:

Sample positions and locations in the facility are normally well defined within standard operating procedures (SOPs), so it is being evaluated whether a fully autonomous mode is required.

The project at UCD is part of a collaboration between the university and industry partners. The objective of the study is to develop a robot to undertake four key actions:

These tasks were chosen as the first steps for a robot in this industry, with the expectation that in time its capabilities will be extensively broadened. It is envisaged that operating companies adopting these robots within their facilities will want to configure their systems to carry out multiple tasks to suit their own particular requirements.

It is also predicted that the robots will also be required to carry out other simple tasks, such as garment replenishment or restocking in their downtime periods. With this in mind, it is the intention to keep the robot platform completely flexible and adaptable.

Mindful of the need for flexibility and adaptability, the project team are considering potential features and functionality requirements. One example of this is whether or not a vision system is needed: this depends upon the task at hand. It is quite possible that the settle plate task will not require a vision system, whereas the contact plates task will need this functionality.

Communication and integration with factory computer systems is another key factor. As part of the study, the robot in UCD will interface with Lonza’s MODATM software. The MODA-EMTM solution will manage the scheduling, workflow and data analysis of the environmental monitoring samples.

Another important consideration for the adoption of robots in the pharma industry is the need to pass goods and materials between areas of different environmental grades through Material Air Locks (MALs).

A common procedure for material passing through MALs is to wipe down each item with IPA. In the past, this was achieved through the use of a low fibre shedding cloth and IPA spray.

A scientific study is currently underway at Centre of Applied Science for Health, TU Dublin, to determine whether IPA wipes can be replaced in this important task

Spraying is less common in recent years due to health and safety concerns. IPA wipes are now the preferred approach, and unfortunately, robots find it harder than humans to handle IPA wipes. This consideration, coupled with the fact that IPA has disadvantages, especially where large/inaccessible equipment is concerned, has resulted in another collaborative industry/academia project, this time with Technological University Dublin (TU Dublin).

A scientific study is currently underway at Centre of Applied Science for Health, TU Dublin, to determine whether IPA wipes can be replaced in this important task. The type of approach that will replace the IPA wipe is likely to differ depending on the nature of the MAL.

The alternative will be dependent upon what is being transferred and the grade of the airlock. In order to set a benchmark, a baseline study of exactly how IPA performs in each of these environments within existing facilities will be required.

Preliminary results from a study at TU Dublin have shown promising data for the use of UV, and discussions are underway between TU Dublin and industry-leading pharmaceutical companies to build on the initial findings. 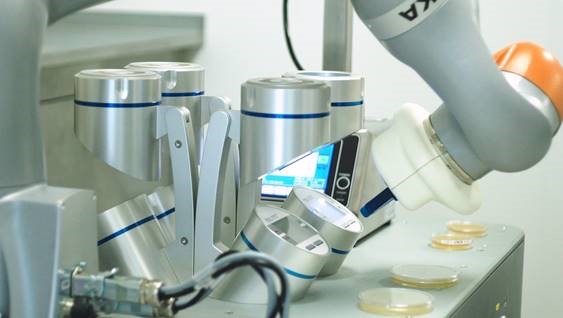 It may happen that the robot from the UCD project will become available to the industry before the scientific study at TU Dublin has been concluded, resulting in the need for human intervention to wipe down the robots as an interim measure until a replacement method is found. Nevertheless, these projects by two Irish universities with their industry partners are paving the way for autonomous robots in pharma facilities.

Project Marvin is a collaboration between UCD, Novartis, Lonza and PM Group aimed at automating environmental monitoring within pharma and is co-funded by Enterprise Ireland.

Project Karn is a collaboration between TU Dublin and PM Group, aimed at automatic sanitisation within material airlocks in pharma facilities.

N.B. This article is featured in the February 2020 issue of Cleanroom Technology. Subscribe today and get your print copy!