After a second day of expert talks from Guardtech, Validair, Ecolab, and more, the Cleanroom Technology Conference 2020 has concluded. The following is a review of these talks and the interesting conversations spurred on by the presentations and group discussions 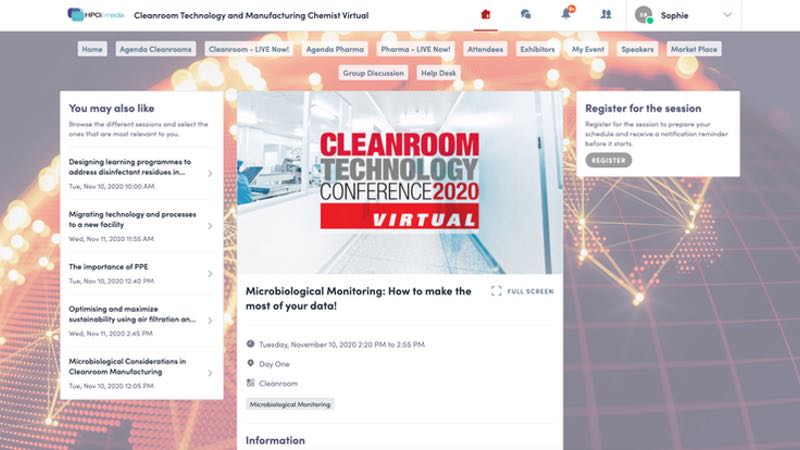 Gordon Farquharson from Critical Systems then asked in the chat: "Have you developed special construction protocols for working in and adjacent to existing client operations during COVID? Did this include routine testing of your site personnel?" To which Wheeler replied that the deliveries were tested 72 hours prior to delivery. "These are offsite constructed modules – therefore the risk is limited. For onsite construction projects, our teams have been segregated, effectively working in their own bubble with separate welfare facilities," he said.

The topic of working bubbles has been key to industries getting their work done, and the conference made it clear that cleanrooms have been no exception despite their cleanly nature.

Next to the metaphorical podium was George Walker from Ardmac, who continued on the modular theme with a discussion of application and use of modular cleanrooms and facility design, in line with current manufacturing trends.

When you are doing a calculation you are assuming what the outside air contamination is, sometimes the airflow, and certainly the fan efficiency

Asgard Cleanroom Solutions' Lee Harvey then took over in a talk done jointly with G-CON Manufacturing, that compared these new construction techniques to traditional methods, looking at benefits and considerations for a new approach.

When conversation in the comments turned to disassembly and destruction of a site at the end of use, Jimmy Blaney from Asgard turned the conversation towards sustainability: "Traditional drywall cannot be repurposed, where modular monobloc systems can. BUT this would need careful planning."

Combined with how the modular offsite constructed PODS are fully relocatable, these new techniques seem to have a lot of eco-friendly potential!

Stephen Ward from Validair was up next to discuss commissioning, verification and testing of cleanrooms, and even clean zones. In response to this very interesting talk Matthew White asked: "What are the benefits to changing the extract in cleanrooms to low level (we currently have ceiling mounted supply and extract) what are the largest benefits from retrofitting to low level? If any, considering cost?"

Ward's reply stated that though a great questions, it was not a simple one to answer. "High in - low out is generally considered the best way to get good ventilation effectiveness," he explained. "But there are lots of other factors that will effect the effectiveness of the ventilation system. Particularly the type of supply diffuser being used. People think a turbulent flow room does not have airflow moving upwards, but that is not correct."

For onsite construction projects, our teams have been segregated, effectively working in their own bubble with separate welfare facilities

Taking the conversation in the direction of new pharmaceutical therapies, STERIS' Walid el Azab then gave a talk on Common ATMP challenges in cleanroom contamination control. Within the talk he discussed tools to figure out the best frequency of cleaning and other tips for the new technology.

"ATMPs don't bring anything new," el Azab said. "But what it is asking for the manufacturer is to be able to understand their own processes. If you can map and understand the processes, you can understand the source of contaminations, and figure out where to put the controls."

David Keen from Ecolab and Pharmig followed el Azab's with a talk about designing the world's best disinfectant. An ideal that though quickly debunked as impossible for every application, helped form a list to find the best for each application.

Halfway through Keen's talk came a brief pause for two minutes of silence for Remembrance day (which is observed in the event's host country of the UK), in honour of all those who fought and died in the line of duty.

Syntegon's Matthias Angelmaier spoke next, comparing RABS vs. Isolator. He discussed the status quo and a look ahead into the future.

Sean O'Reilly from AAF International then gave a very interesting talk about optimising and maximising sustainability using air filtration and air change rates within a cleanroom environment. This is one of the main topics discussed when planning how to reduce the energy demands of cleanrooms, so his talk was well attended.

O'Reilly expressed concern that when calculations were first done in the early 1990s, there were a lot of assumptions made, and he believes there still are to this day. "When you are doing a calculation you are assuming what the outside air contamination is, sometimes the airflow, and certainly the fan efficiency," He said.

Then O'Reilly went on talk about sensors, which at a minimum he said can help monitor these sorts of things. He enthused about the new innovations in this sector particularly, and how it will aid the industry as a whole.

To conclude the conference Keith Beatie from EECO2 gave a talk detailing how to improve quality and compliance, whilst reducing energy consumption, carbon emission and cost.

Beatie's talk spurred discussion of the practicality of different practices in cleanrooms. For instance, air showers: "Air showers (entry) are not common and in my opinion unnecessary in most cleanrooms. Provided the gowning is adequate and change rooms are designed well, then I do not see a real benefit in air showers. They do have a function in high-potency / cytotoxic manufacturing spaces where air showers on exit can provide an additional level of protection. For efficiency, I would avoid air showers unless there is a real need."

With that the 2020 Cleanroom Technology Conference came to a close. It was a funny year, and everyone has been working tirelessly to pull off brilliant things in less than ideal circumstances. A big well done to everyone and we hope to see you (maybe in person) next year!