The new European standard outlines the importance of understanding the risks of microbial contamination. Being able to accurately identify microbes isolated from the controlled environment is vital to assess risk to pharmaceutical products, and ultimately patients, and ensure that these organisms can be eliminated or controlled. Duncan Barlow from Charles River lays out the most important parts 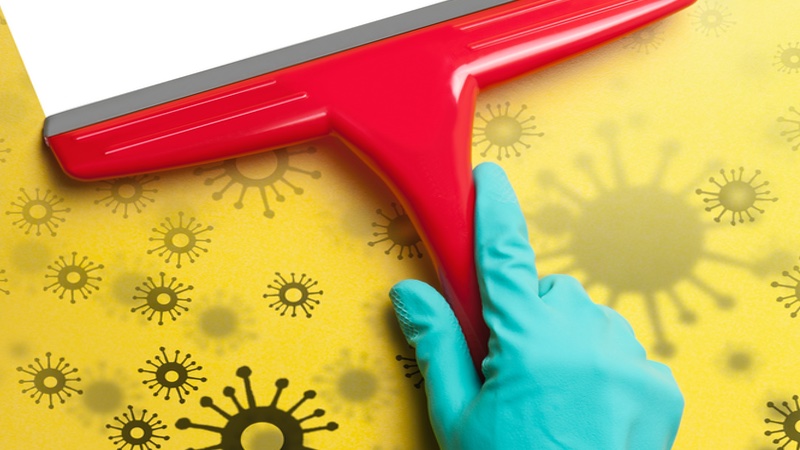 The third route of transfer, liquid, is not included as part of the scope of this document. It intends to help increase the effectiveness of risk management associated with microbial contamination, improve efficiency, and provide users with the methodology and understanding to derive a system of microbiological control. In regulated industries this new standard provides guidance that is consistent with the expectations of regulatory authorities.

It is important to note that this standard is limited in scope to viable microbiological contamination and excludes any considerations of endotoxin, prion, and viral contamination.

There are also several annexes that provide further information on biocontamination control specific to certain applications.

Evaluation of the risk to quality should be based on scientific knowledge. Having a good understanding of the microflora present is vital. Contamination can come from a variety of sources and when there is a risk of product or process contamination from particular types of organisms, these are considered microorganisms of interest (or objectionable organisms).

It is important to be able to accurately identify these organisms of interest to assess either the possibility of their survival or if they are likely to produce toxins. As part of the risk assessment, the potential for causing contamination of the product or harm to the patient should be assessed.

There are many ways to characterise or identify microorganisms isolated from cleanroom environments (e.g., Gram stain, phenotypic, genotypic, etc.) and being aware of the limitations of these is vital. Basic characterisation such as Gram reaction gives general information about the likely source of the contaminant, but more detail may be required to fully understand the risk posed. It is also recognised that the Gram stain procedure is one of the most frequent causes of incorrect identification of bacteria. The Gram staining reaction observed from a bacterial strain does not always correspond to its Gram type, and the multiple steps, and controlled times required for each step, mean there is potential for analyst error, as well as user interpretation of the result.

This has the potential to provide incorrect results and is difficult to align with data integrity requirements. With the Gram stain being the first step in many phenotypic identifications, it can lead to erroneous results from these systems. Different methods of identification have varying levels of accuracy.

But, it is still important to have an identification that is as accurate as possible that will aid in risk assessments, trending, and future investigations. In recent years Matrix Assisted Laser Desorption Ionisation Time of Flight (MALDI-TOF) microbial identifications have allowed for faster, more cost-effective identifications. And whilst this technology is not as accurate as sequencing, it has the potential to be much more accurate than phenotypic methods, due to analysing ribosomal proteins that are closer to the DNA of the organism rather than analysis of biochemical reactions (such as fermentation, acid and salt tolerance metabolism, etc.). 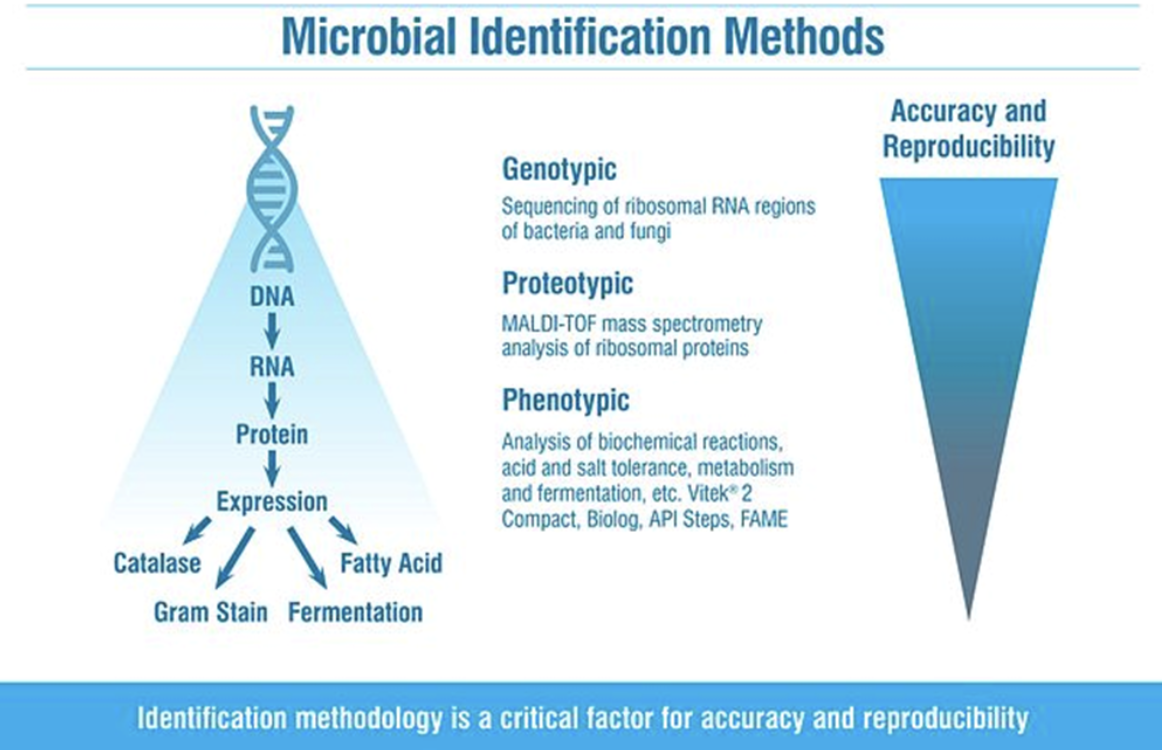 When there is the potential for incorrect identifications any subsequent remedial actions may not address the issue, and the problems will continue to occur. Similarly, high rates of unidentified isolates make assessing the specific risks more difficult.

As outlined in the introduction of the new standard, there must be a formal system of microbiological control that identifies, controls, and monitors contamination on an ongoing basis. This is a process of continual improvement and monitoring plans should be reviewed and revised based on results of the monitoring data. Whilst the method of identifying any contamination is only a small part of the process, it is nonetheless a critically important one as the identification generated will determine the risk assessment and subsequent actions. Simply generating "a name" is not enough.

Whilst the technology utilised for identification methods plays a role in the accuracy of the result, one aspect that is often overlooked is the library or database that the system relies upon to generate the ID. This is outlined in the Pharmacopoeias. For example, United States Pharmacopeia <1113> states:

Microbiological identification systems are based on different analytical methodologies and limitations may be inherent to the method and/or arise from database limitations. Identification is accomplished by matching characteristics (genotypic and/or phenotypic) to an established (reference) organism such as a type strain. If a microorganism is not included in the database, it will not be identified.

It is important to note that when an identification system does not have sufficient coverage it does not always result in a "no identification." It may also result in an incorrect identification, meaning any further risk assessment will be based on incorrect information, which potentially is worse than no identification. Understanding the types of organisms present is essential to making an accurate assessment of the risk to product or patient and tracking the likely source is made easier. For example, an organism found in a grade A room may have been seen previously in a surrounding area and would be the likely source. Having the ability to link isolates will aid investigations when out-of-specification results are detected.

The standard requires that microorganisms of interest should be identified, and survival possibility considered. A microorganism of interest is defined as an organism that is harmful to the product, the process, or the patient. It is especially important to be able to identify isolates to determine if there may be some resistance to steps taken to remove contamination, e.g., disinfection regime or sterilisation. Dependent on the process, there are specific organisms that can pose challenges. For example, the risk of spore formers is well understood, and cleaning schedules may require the use of sporicidal agents when these are isolated and identified.

However, different species will have different resistance to the agents used. Awareness of the species present will help to understand the possibility of survival of the cleaning and disinfection programme and define any changes needed to be implemented, e.g., contact times and type of sporicides used.

When sterilisation steps are used (and dependent on which method is utilised) there may be certain species that are more likely to survive these processes. For example, heat and steam is a common sterilisation step, but many bacterial spores show heat resistance especially when the pharmacopeial reference method can't be used (i.e. 121oC for 15 minutes). For those products sensitive to the temperatures employed in this method, lower temperatures may be utilised, meaning that the potential risk to the product from bacterial spores should be considered. When lower heat processing cycles are used it will be important to identify any microbes and assess for heat resistance.

The standard requires that survival possibility be considered

A further example is when irradiation is used as a terminal sterilisation process, which is very common in the medical device industry. There are many species known to have resistance to irradiation (e.g., Methylobacterium spp., Acinetobacter spp.), but Deinococcus spp. are a group of organisms that are recognised as being very resistant to irradiation with some studies demonstrating survival at doses of 30 kGy. Obviously isolating a species from this genus should be of concern when irradiation is used as the terminal sterilisation process. Whilst studies into these species highlight their existence in specific environments such as deserts or canned meats, they have also been found in cleanroom environments.

From data generated at Accugenix (a global microbial identification laboratory specialising in cleanroom isolates), species from this genus have been identified from cleanroom environments more than 5,600 times. Being able to isolate and accurately identify organisms like these that may be present in the cleanroom is vital to maintaining the room.

Many products also contain potential growth substrates that may allow for growth within the final product, affecting product quality. Microorganisms are metabolically diverse, particularly filamentous fungi, which have been shown to utilise nutrient sources as varied as plastic and even radiation. Presence of certain microorganisms in the product may then result in spoilage.

The presence of moulds or other microbiological contamination including objectionable organisms can be indicators of poor cleaning or poor design and increases risk to the product or patient. An accurate understanding of which species is present in the clean environment will help accurately assess the risk to the product and patient.

Data generated from the Environmental Monitoring programme should be analysed and the data trended to help identify any adverse trend that may require corrective or preventative action (CAPA). The data should be reviewed by a competent microbiologist to identify any possible issues such as unexpected quantitative or qualitative shifts in the types of organisms recovered due to changes in season, disinfection programme, operator population, raw materials, or facility controls. Single results are often not significant.

When the data generated by the monitoring system is comprehensive and consists of accurate reliable identifications, analysis of the information should allow for proactive action e.g., if a microorganism of interest is isolated from an uncontrolled or lesser controlled area, action can be taken to try and prevent this from being transferred to the critical areas or even product. There are many methods of statistical analysis, but the data should be reviewed regularly, which can indicate a developing problem. It should also promptly identify out-of-specification results. Accurate identifications are a vital part of the process to ensure that the data analysed for trends is reliable for subsequent decision and action. Inconsistent identification methods that may generate different names for the same isolate or fail to identify at all will make trending ineffective.

Spreadsheets are still commonly used to manage data, and whilst they can be useful and powerful, they can be difficult to validate and comply with data integrity requirements. Microorganism names are often long and complicated, and transcription of these names can sometimes introduce errors, meaning that results may be excluded dependent on how the trending tool is used.

The objective of out-of-specification (OOS) investigations is to determine if there has been a real change in the occurrence of microbial contamination. Investigations should be prompt, thorough, and scientifically sound to determine the cause and appropriate corrective action. A species-level Identification is an important part of this process and when an OOS is detected the first step should be to identify the species. This will help determine the risk to the product or process, determine the likely source of the contamination (tracing the same species via the historical database), and then help define the appropriate CAPA. Accurate identifications are also important when there is an out-of-expectation (OOE) result. During monitoring, there will be typical resident flora but when a new species is detected, this may trigger an OOE investigation to determine the risk of this species and the route of transfer.