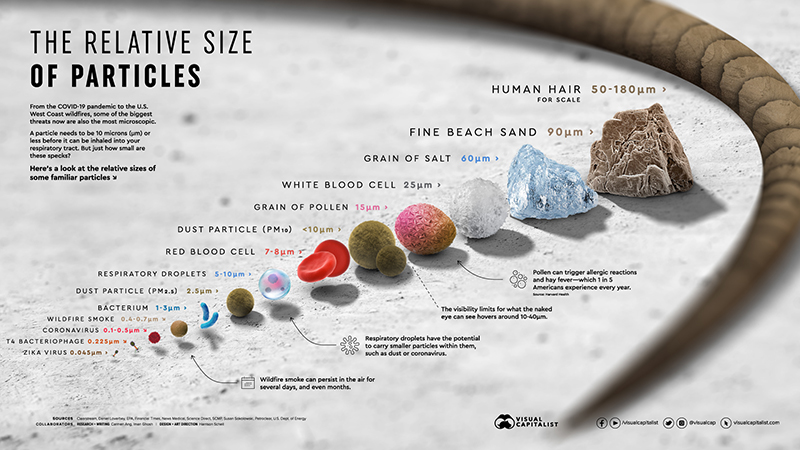 Particle counters do just that: they count particles. They are used in cleanrooms to count and size the particles in the air so the cleanroom can stay in proper working function and meet crucial certification criteria.

1. Particle sizing and why it matters

Our particle counters detect some tiny particles. They are so small, the only way to detect them is through high-accuracy lasers, but we'll get to that in a minute.

As an example, these are the sizes of some common particles:

But advancing technologies, such as photography, are driving us to detect particles even smaller, such as those in the nanometer range. So we work every day on technology to detect these particles.

It's critical to know the size of particles in your cleanroom for manufacturing, but also for certification. Cleanroom certification requires a concentration of particles to be below accepted limits of a sample volume based on the class of cleanroom, particle size tested and the cleanroom operation based on the number of HEPA filters, type of filter, and the number of air changes per hour.

2. Anatomy of a particle counter

We use light scattering to detect and size particles. But it's not a perfect science. That being said, it's the best technology we have to date. So as you decide on where to source your particle counter or where to service it, make sure they are the ones setting industry standards and best practices.

Particle counters house a laser sensor block inside them that does the processing of the particles. This block contains the following elements:

These components allow the particle counter to move air through the sensor block and detect the size of the particle through light scattering. 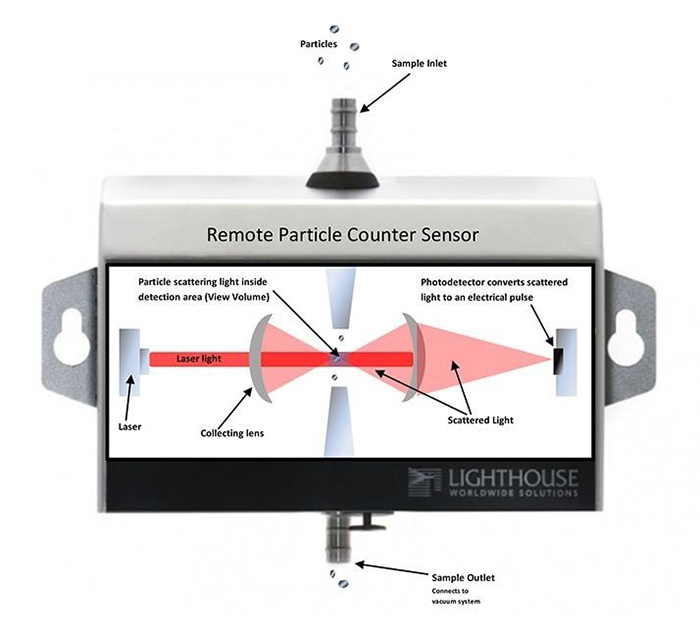 3. Fundamental methods particle counters use to collect and size particles

This is the key to understanding the fundamentals of particle counters.

Through the use of a pump, a vacuum is created that pulls in air from outside the particle counter. That vacuum pulls the air from the inlet through the laser diode and then out through the exhaust.

As the air passes through the inlet, it's compressed so that we can get the most accurate light scattering reading possible.

When it passes through the diode, it reflects the light, causing light scattering. The larger the particle, the more light is reflected. That's where the photodetector comes into play.

The photodetector is what converts the light energy into a voltage signal. This way, we are able to quantify the physical size of the particle and present a particle count! Those are the fundamentals of how a particle counter works.

Want a real-world example of a similar physics phenomenon?

Think of the air like a half-full bucket of water. You know there is half a gallon of water in the bucket.

When you place a bowling ball inside the water, the water level rises to ¾ of the bucket. You know there's no more water than before in the bucket, but now it looks like the bucket has ¾ of a gallon of water - because the volume of the water was displaced.

Using a trusty formula from high school physics, you could calculate the object's volume that displaced that volume of water.

The same principle applies in light scattering: we can tell the size of the particle by the amount of light displaced.

4. Where particles come from in a cleanroom

If everything is working correctly, you shouldn't be seeing many particles at all in your cleanroom. But they do get in there! How?

Personnel are the highest source of contaminants in cleanrooms, accounting for 75% to 80% of particles found. We shed skin, hair, and microorganisms constantly - even when we are sitting.

Even when we are stationary, we generate about 100,000 particles of 0.3 microns or larger.

(That's a lot of potential contamination if guidelines are not strictly adhered to.)

Our gowns even have contamination - so the antiseptic gowning protocol is important. Often, people don't gown properly, leaving skin around the wrist exposed. This is a huge risk within a cleanroom as bacteria and viable particles can be introduced into the environment.

While you're in the cleanroom, the way you move and expose yourself is also incredibly important. Particles can even get through gowns so they are not guaranteed to protect the cleanroom from a person's contaminants.

If the FDA or external auditors come into your cleanroom, the first thing they will do is check your personnel and the way they interact with the cleanroom.

So where else do particles come from?

5. Key things to watch for in your particle counter?

Technology always has limits and key factors to pay attention to. The following are some metrics that will need to be monitored and maintained in your particle counter to make sure they function properly.

As with all technology, there are known limits. In particle counters, this is the concentration limit.

Why does this matter? Well, you want to know accurately the size of the particles in your cleanroom. This matters for production, but also for certification.

But, in cleanrooms, concentration should remain low if particles are being kept out of the cleanroom. If everything is working correctly, you shouldn't be seeing many particles at all.

This is the volume of air or gas passing through the particle counter one unit at a time. This is dictated by the vacuum moving the air through the laser.

If the flow rate is too fast, the particle will reflect less light. This will result in the particle being counted as a small particle when it's actually larger.

The same is true for the reverse: if the flow rate is too slow, the particle will reflect more light as it sits in the laser for a longer period of time. This will result in a large particle being recorded when it doesn't actually exist.

Depending on the size of your cleanroom and how many areas you need to test, there are numerous options for you to choose for your cleanroom. But we always recommend going with best practices and technology that sets industry standards, such as our real-time particle monitoring systems.

These systems will notify you immediately if something is amiss, which allows for less contamination and a quick response time. They are designed to keep you from experiencing reduced yield during production and optimising your cleanroom.

Want to know more about our particle counters and maintenance options? Contact us today!