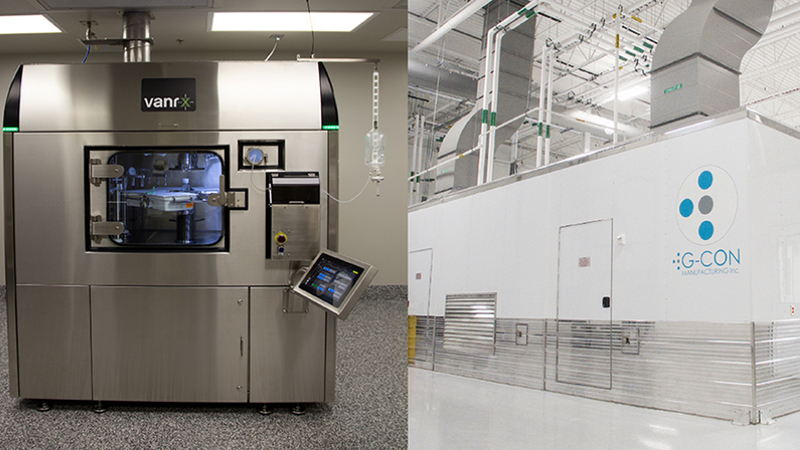 G-CON Manufacturing and Vanrx Pharmasystems, known for its advanced aseptic filling machines, have announced that they are working together to offer the Microcell POD, the first and only turnkey facility for aseptic filling of advanced therapies.

The Microcell POD is comprised of Vanrx’s Microcell Vial Filler installed inside G-CON’s prefabricated cleanroom POD. It is the only fully integrated, pre-qualified, pre-installed aseptic filling facility with the ability to be shipped globally.

The new product supports both organisations’ missions of providing solutions that bring products to market faster as the Microcell POD requires a lead time of only 3 months.

“Companies making targeted drug products including gene therapies, mRNA, and personalised cancer vaccines have to a lot of problems to solve in bringing these new modalities to market. It makes sense to combine the Microcell with the G-CON’s POD products because it provides certainty of performance and speed to market, while automating the crucial step of aseptic processing within an agile, completely closed system,” said Chris Procyshyn, CEO and co-founder of Vanrx.

“Our new POD product is standardised and fully designed to fulfil the delivery time need. Moreover, filling capacity is and has been a major bottleneck, so G-CON joined forces with the Vanrx team to create a fully functional, prequalified filling package for our customers,” Maik Jornitz, CEO of G-CON, stated.

The Microcell POD is ideal for drug development, and the manufacturing of personalised medicines and clinical trial supplies.

G-CON and Vanrx are exhibiting at Phacilitate Miami, 21–24 January 2020 with an in-booth presentation leading up to the “G-CON / Vanrx East Coast Roadshow Tour” in April.