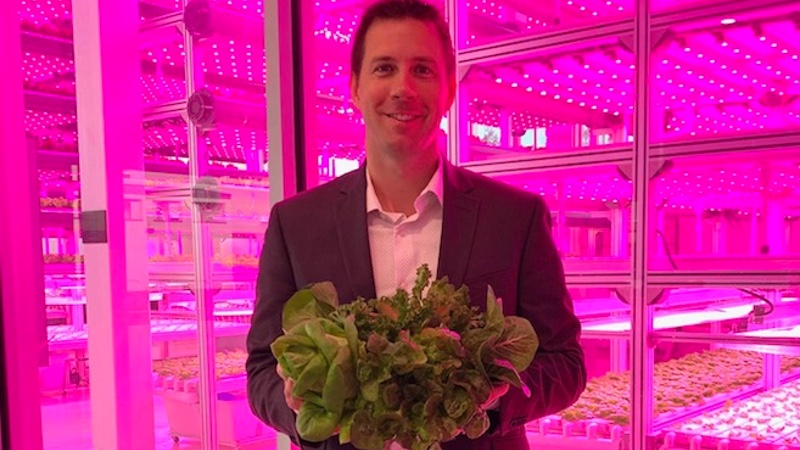 Daniel Malechuk, CEO of Kalera, in the new Orlando facility

Vertical farming company Kalera has opened its new growing facility in Orlando, Florida. This new facility is the highest production volume vertical farm in the Southeast US.

The rapidly constructed facility also demonstrates Kalera’s ability to quickly build and open farms around the US and the world. This new facility complements Kalera’s initial HyCube growing facility located at the Orlando World Center Marriott and is centrally located in the heart of Florida.

The new facility has the capacity to supply millions of heads of leafy greens per year to consumers while also providing dozens of new high-quality jobs.

Originally announced at the end of August, Kalera was able to get its new growing facility up and running in less than six months due to a streamlined design and construction process that illustrates the company’s ability to quickly scale and expand its vertical farms.

Kalera was able to retrofit the existing building with its proprietary technology to create the highest production volume vertical farming facility in the Southeastern United States. As Kalera accelerates its growth over the next few years, it will build additional facilities, expanding production capacity throughout the US and internationally.

The company utilises cleanroom technology and processes to eliminate the use of chemicals and remove exposure to pathogens.

With indoor facilities situated right where the demand is, Kalera is able to supply an abundance of produce locally, eliminating the need to travel long distances when shipping perishable products. This means Kalera can ensure the highest quality and freshness by delivering product to customers within hours of harvest rather than days or weeks.

“Adding a large-scale vertical farm to Central Florida was the next logical step for us as a company. We’ve spent years perfecting and fine-tuning our technology to place us as industry leaders in the local farming ag-tech revolution," said Daniel Malechuk, CEO of Kalera. “Right now, we are leading the way in defining what pick-to-plate means for the future. In a sense, we are trying to perfect Mother Nature indoors by combining science and technology with farming.”

"Kalera's business is built on good science. We’re planting non-GMO seed, and over the past several years we have perfected plant and data science-driven methods to optimise the grow environment, nutrient mixes and distribution that make plants thrive,” said Cristian Toma, Chief Technology Officer of Kalera. “We’re excited to be able to meet customers’ demands for cleaner, safer, non-GMO, pesticide-free leafy greens that are fresher, boast a longer shelf life and higher nutritional value, and are grown locally with consistently high yields.”

Kalera opened its first vertical farm in 2018, the HyCube growing center, on the premises of the Orlando World Center Marriott to bring fresh, local produce to the hotel’s visitors and customers. This farm has served as a successful model illustrating the place of vertical farms in the sustainable food movement.