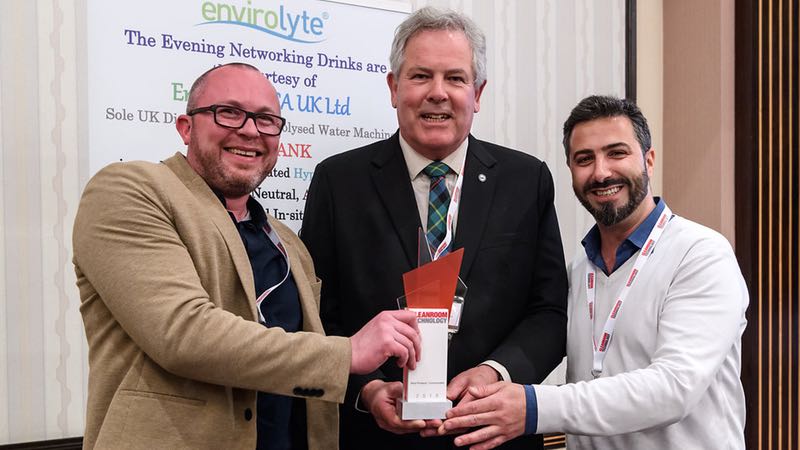 Kimtech, the critical control products brand of Kimberly Clark, has received the Best Exhibitor Product – Consumables category at the Cleanroom Technology Conference 2018. The award recognised the Kimtech* A5 Sterile Cleanroom Coverall and Dressed for Success campaign.

The A5 cleanroom garment is designed to simplify gowning and reduce the risks of contamination. It features patented CLEAN-DON technology; in-built features and visual instructions that show users exactly how to grasp and manipulate the coverall for faster, easier and safer donning.

Voters of the award included conference speakers, delegates, fellow exhibitors and other visitors. Many were impressed with the A5 coverall’s high-performing materials and user-friendly donning capabilities, as well as its use in the Kimtech Dressed for Success campaign.

The campaign aims to reduce the 50% of contamination alerts and actions in cleanrooms that are people-related, by promoting high quality disposable apparel designed to minimise human error.

Advanced donning features are incorporated into disposable cleanroom garments with a focus on donning safety and efficiency. More information is available at the campaign website: https://www.kcprofessional.co.uk/dressedforsuccess/home.

The Cleanroom Technology Conference 2018 attracted approximately 600 people over the two days, including specialists in contamination control from major pharmaceutical, laboratory and cleanroom companies.

Kimtech was represented at the event by Robert Hunt, scientific account manager UK and Ireland, and Matteo Barilla, European key account manager, who received the award on the company’s behalf at the end of day one.