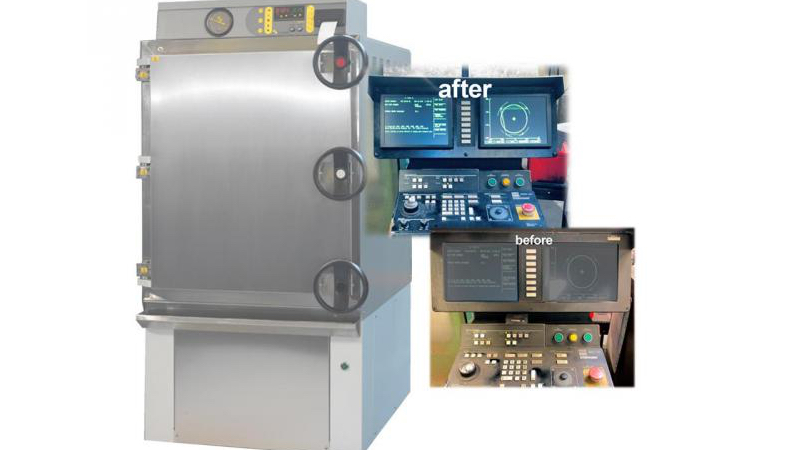 Priorclave has invested in a new CNC (computer numerical control) system from Canada-based Monitech to upgrade to one of the milling machines at its UK manufacturing centre in London. The upgrade was carefully planned to cause minimal disruption to autoclave production.

The upgrade was relatively straight forward and caused minimum disruption to the production. As a dedicated lab autoclave manufacturer supplying its own brand of sterilisers worldwide, Priorclave continually evaluates production equipped to ensure that machine-tool technology can handle increasing production schedules. The company says that machine failure cannot be tolerated.

Earlier this year the functionality and control a Hurco BMC-40 mill came under scrutiny. The machine, a vital part of the machine shop, produces headers for the RSC range of rectangular autoclaves. Although mechanically sound the CNC control system, the Ultimax ll with two CRT (cathode-ray tube) monitors, was beginning to show its age. Over time the displays had started to fade, further degradation would have made the controllers, and hence the machine, virtually unusable, comprising autoclave production.

A relatively quick solution was required. The existing monitors used out-dated CRT technology. Evaluating alternates, the first was a fix directly from the manufacturer, probably more costly with long lead times. Priorclave considered a home-grown solution– not impossible but extremely time consuming. The most viable fix came from Monitech Industries, with an existing, purpose design upgrade kit for the system using two LCD screens with all the connections etc. This would prove to be the least costly and available on very short delivery time.

“Though not quite plug and play, it was not far off," said Martin Prior, Production Director. “We were able to continue using the machine with minimal disruption, cost and delay. This made a big difference to us, especially at a time when most of our orders were for rectangular units.” The new screens were pretty much a straight replacement and now give a very clear and readable display, essential for the production staff.