Following intense planning since 2017, Lindner Clean Rooms has completed cleanrooms in classes C, D and CNC for the Fresenius Kabi Melrose Park Expansion project in the US. Lindner's Waldemar Betke talks about some of the team's problem-solving and innovative workarounds for the requirements of the build 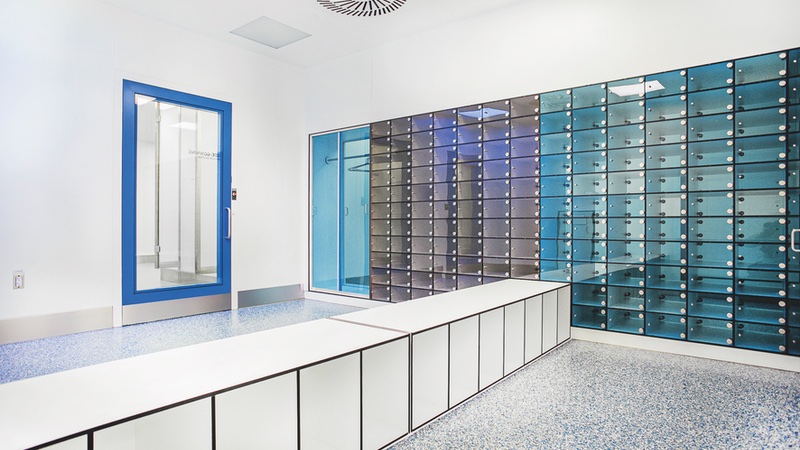 Since its entry into the US market in 2008, the healthcare company Fresenius Kabi has grown to become a leading provider of generic injectable drugs.

In the US, the company focuses on the development of generic pharmaceutical products, IV solutions and pumps, transfusion devices and cellular therapies and clinical nutrition products. Also located in Illinois, however, is the company's Melrose Park pharmaceutical manufacturing campus which is being expanded.

This expansion includes a new building with 12,000 sqm of cleanroom space according to plans by the architectural, engineering, and consulting firm CRB and includes new aseptic filling equipment, highly developed isolator technology, freeze dryers as well as areas for pharmaceutical formulation and material storage.

At the end of the construction period, additional cleanrooms were built in the same building according to plans by Genesis Architects, all equipped with Lindner cleanroom systems. Lindner Clean Rooms was responsible for the expansion of various cleanroom areas from September 2017 to the end of 2020, including intensive planning services.

For this, the team worked closely with the planners of the CRB and with the Fresenius engineering and project team. Together, they designed suitable solutions with partly new product developments. The coordination of the construction site was done by the Gilbane Building Company as Main Contractor.

The assembly of the cleanroom systems was also executed by the local assembly specialist Thorne and an experienced Lindner Supervisor Team. Specific activities such as sealing work, door commissioning and commissioning were carried out by Lindner with local partners such as Dormakaba USA.

Fresenius Kabi also had its own design requirements and specifications, which led to the development of a new sliding door system and a customised design of glass wall air returns.

Throughout the building, various cleanroom classes C, D and CNC are distributed over two floors, all of which are equipped with modular ceiling, wall and door systems. Narrow airlock corridors or personnel airlocks lead off from the extensive corridors, which in turn lead to the actual production areas.

The corresponding ventilation technology - combined with supply/exhaust air diffusers in the ceiling and the return air shafts on the walls - is accommodated in the ceiling interstitial that are approximately three metres high.

Lindner fit-out solutions are also found here, such as specific guard rails to match the walkable ceiling and protect the maintenance personnel from falling. To simplify access and maintenance of the technology in the ceiling interstitial, the 'Line 80 S Type 2' walkable ceiling system was selected, supplemented by cleanroom-compatible LED luminaires in various designs integrated flush into the ceiling elements. 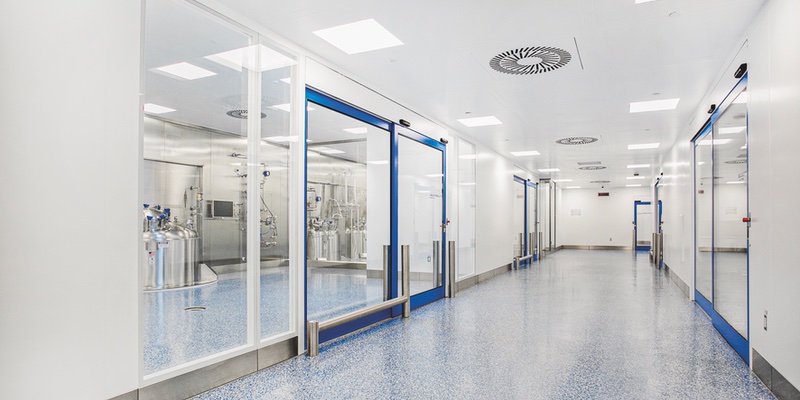 The walls were constructed with the flexible modular wall system 'Lindner Pharma 80 C' as a cladding or Bi-panel system. The Life Pharma 618 glass partitions as full glazing without intermediate profiles provide maximum transparency between the rooms and airlocks. The 120 pcs wall air returns were also installed as a visible full-glass version and enable up to 25 air changes per hour.

In keeping with Fresenius's corporate colour, most of the doors were fitted with insulating glazing in blue powder-coated frames. The 'Swing Pharma' with a door leaf thickness of 80 mm and various widths. The door units were equipped with both manual and automatic drives and an interlocking system. In addition to the automatic closing system, a flush-mounted LED light above the door indicates the current room status. Lindner designed the 'Slide Pharma 80' especially for the MPEX project, to match the 'Logic Pharma 80 C' wall system, as a flush sliding door system with a clear passage dimension of up to 1,700 mm.

As with the 'Swing Pharma', the decision was made to use a slim, automatic drive combined with compliant safety sensors. In addition, robust stainless steel bumpers were installed in front of the door elements as protection from the pallet jacks.

Special designs can also be found in the personnel locks: in addition to shoe racks and coat racks made of HPL and Makrolon, there is also seating and waste bins suitable for cleanrooms.

In total, over 12,000 sqm of ceiling systems were installed including approx. 1,600 LED lights, more than 9,000 sqm of partition systems, almost 1,000 sqm of pharma glazing systems, over 100 flush hinged doors and 65 flush sliding doors.

Given not only the development of special solutions, but the total of 100 x 40 ft containers with products and materials that had to be shipped, the logistics were a particular challenge, including strict customs regulations and country-specific requirements. Likewise, handling the project in accordance with American standards and with BIM was back in 2017 new territory for the Lindner Clean Rooms project and installation team and is now a standard procedure in daily business.