Assessing disinfection rotation at the point of use: Designing a field trial

Qualifications required for disinfectants consist of three phases: suspension tests, surface tests and field trials. The first two phases are well-described as either European or US standards, with surface testing against a range of representative surfaces being regarded as providing a more robust challenge than the suspension test. What is not described in any standard is the field trial. Written by Tim Sandle 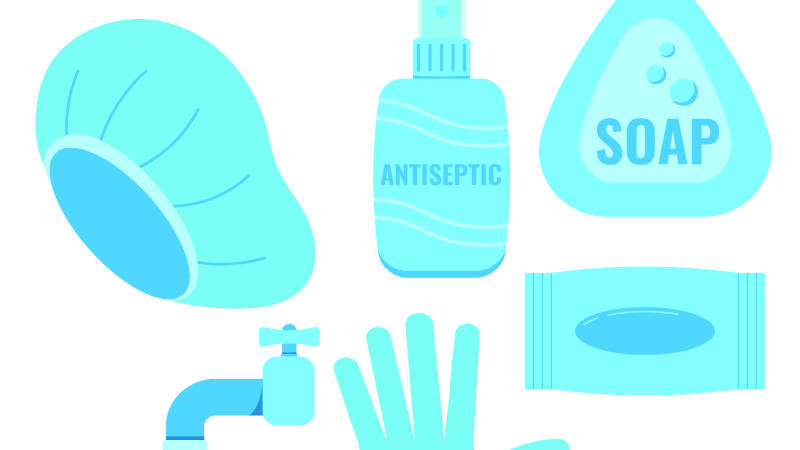 The field trial is the most important of disinfectant qualification tests for the cleanroom because it tests disinfectants at the point of use and relates efficacy to environmental monitoring data. The field trial takes the laboratory-based testing and key theoretical parameters (such as concentration and contact time) and applies these to real-life conditions. It is noted that laboratory trial tests create a greater challenge for cleanroom disinfectants where numbers of microorganisms used are higher than those expected within a cleanroom facility. The field trial not only enables a single disinfectant to be evaluated, it also enables frequencies of application to be assessed and an assessment to be made between the rotation of two disinfectants with a different spectrum of activity and modes of action (typically, and as required by EU GMP Annex 1, rotation between a sporicide and a non-sporicide).

This article outlines an approach that can be adopted for undertaking a field trial across cleanrooms of three different grades (EU GMP Grades B, C and D). This is based on a case study using two disinfectants manufactured by Ecolab (low residue hydrogen peroxide and low residue quaternary ammonium compound) showing how efficacy can be assessed using surface environmental monitoring together with an assessment of surviving cleanroom microorganisms.

Disinfectant efficacy is demonstrated through performance testing to show that it is capable of reducing the microbial bioburden in either suspension (planktonic state) or from cleanroom surfaces to an acceptable level. The disinfectant efficacy assessment should provide documented evidence that it demonstrates the bactericidal, fungicidal, and/or sporicidal activity necessary to control microbial contamination in the facility. It is incumbent upon users to conduct surface evaluation and for European Medicines Inspectorate and U.S. FDA regulated premises this is mandatory. Within Europe the surface test can be performed with (EN 16615:2015) or without mechanical action (EN 13697:2015 + A1 2019).

A field trial is the study of microorganisms isolated (frequency and type) prior to the implementation of a new cleaning/disinfection regime, such as the replacement of one or more disinfectants. The objective is to demonstrate that the new disinfectants(s) is better than or equally good at controlling the bioburden in the production facility as the existing products. Where no field trial has previously been run, a field trial can be applied retrospectively. This requirement is described in both the European holistic standard for disinfectants (EN 14885:2018) and in the applicable USP chapter (<1072>).

The core objectives of a field trial are:

• To establish how often to clean and disinfect

• Establish how often to rotate disinfectants

• Establish if residues need to be removed

Key criteria for a field trial are that it must be covered by a change control and that a protocol must be in place before the study begins, outlining the acceptance criteria. A trial should cover all cleanrooms of use (an exception could be made for excluding Grade A areas as these should not generate much in the way of data) and include a sufficiently large number of samples with which to make a meaningful assessment of data There should also be built into the design sufficient monitoring sessions to assess the rotational frequency between two different disinfectant agents (a minimum of three in order to ensure that the obtained results are not due to chance). In terms of sample types, given that the disinfectant is applied to surfaces there is little value in taking air-samples. The range of samples should be representative of different types of surface materials in the cleanroom and be from both floor and working height locations. Either contact plates or a combination of swabs and contact plates can be used (noting that the recovery from the contact plate is generally superior). An important pre-assessment is with selecting the neutraliser used in the agar of the contact plate, which must be proven to be capable of neutralising any disinfectant residues. The choice of an appropriate neutraliser can become more complex when the two rotational disinfectants have very different formulations.

A field trial was undertaken to assess the microbial status of cleanroom surfaces prior to and after the application of Ecolab disinfectants Klercide Sporicidal Low Residue Hydrogen Peroxide (KSLRP) and Klercide Low Residue Quat (KLRQ). This was an independent study and the examination extended across three different EU GMP grades of pharmaceutical cleanroom. The study examined the differences between the pre- and post-disinfectant conditions for each room in terms of microbial bioburden and microbial recovery, and additionally considered any differences between the rooms and between different sample locations.

Frequency of rotation and use

The two different disinfectants have different formulations and modes of activity (as necessary for rotation). The performance of the disinfectants was assessed using surface contact plates to assess the numbers and types of microorganisms. Samples were taken prior to disinfection and following disinfection.

Each cleanroom was disinfected to the following regime:

• 4 weeks of disinfectant KLRQ, followed by

The 4: 1 pattern ( KSLRP) was undertaken for three cycles, totalling 15 weeks in order to build up sufficient data. With this there needs to be a balance struck between collating a large enough set of samples and implementing what might be a much-needed contamination control measure.

This regime adopted a standard rotational frequency between a non-sporicidal (KLRQ) and a sporicidal (KSLRP) product . If either the overall bioburden or the types of organisms recovered (notably endospore forming bacteria or fungi) warranted it, the rotation would be revised and the frequency of sporicidal application increased.

The concentration and contact time of both disinfectants had previously been assessed through laboratory studies. The method of application of the disinfectant for floors was via a non-shedding mop, using the Ecolab triple bucket system. The application to surfaces was via wiping with a disinfectant using the four-fold wipe technique.

Each of the cleanrooms was sampled using contact plates containing tryptone soya agar containing an appropriate disinfectant neutraliser (Lecithin, Tween 80, Sodium Thiosulphate and L-Histidine). Sampling was undertaken using an applicator to provide a controlled pressure and time (to enable consistency of sampling). The plates were incubated at 20-25oC for three days, followed by 30-35oC for two days. This is a standard incubation regime for the recovery of cleanroom bacteria and fungi.

The rooms were examined under the following conditions:

• 6 contact plates taken per room prior to the next scheduled disinfection (Condition I);

• 6 contact plates taken per room after the next scheduled disinfection (Condition II).

A. Floor samples, taken on vinyl

The collected data was examined for:

A. Differences in microbial counts between the pre- and post-disinfection applications for each cleanroom grade. The monitoring limits were taken from Annex 1 of the EU GMP Guide:

B. Reductions between pre- and post-disinfection sessions

C. Reductions over the course of the study

D. Any differences between the three different grades of cleanroom

E. Selected samples were to be examined for the species of bacteria and fungi recovered

The study results have been divided for each cleanroom. The graphs (figure 1 to 3) display the variation in pre- and post-disinfection counts over time. The two-point moving average tracks the pre-and post-disinfectant bioburden counts. The charts have been drawn to the same scale, to enable comparisons to be drawn. 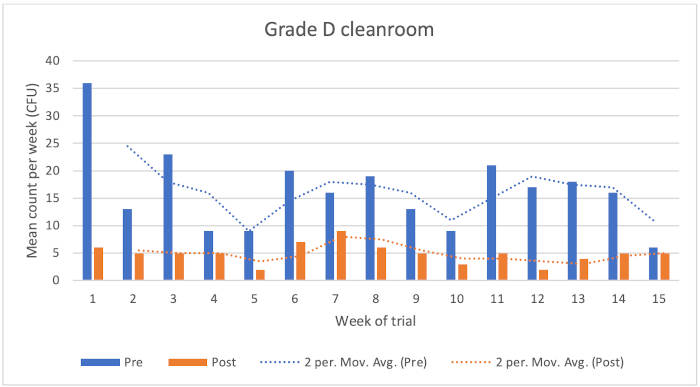 There were five higher environmental monitoring results (although not out of specification) for the pre-disinfection condition. Counts from the post-condition were considerably lower in value. 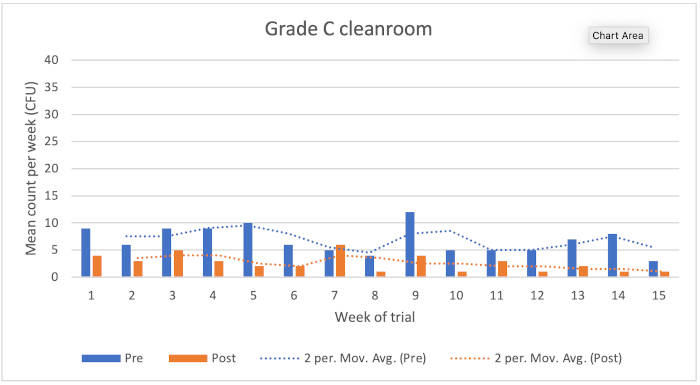 There were no environmental monitoring excursions from the EU GMP action level. 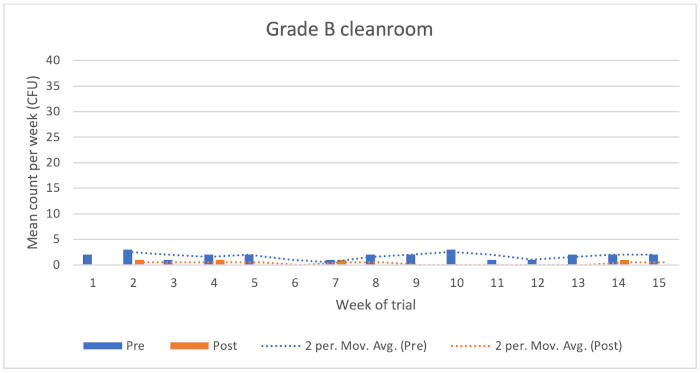 There were four higher environmental monitoring results recorded for the pre-disinfection condition. In contrast, counts were considerably lower when the post-condition was assessed.

Each cleanroom showed an overall reduction in microbial counts. The data also indicates there is no significant elevation in counts between disinfection applications.

The outcome of the study was successful. A further extension of the field trial in an established facility could be to assess the effectiveness of the new disinfectant via a statistical evaluation of the environmental monitoring data before and after implementation of the new regime.

Pre- and post-application bioburden levels across the study

While overlooked, the completion of the field trial is a regulatory expectation

A number of representative isolates were examined for the pre- and post-disinfection regimes. The objective of this was to see if high numbers of resistant strains were recovered (endospore forming bacteria or fungi). Identifications were performed using a phenotypic automated microbial identification system (the Biolog OmniLog).

The data indicates that no resistant strains were recovered from the cleanrooms from the post-disinfection monitoring. Some incidences of spore forming microorganisms - Bacillus species (bacteria) and Aspergillus (fungi) were detected from the pre-disinfection application, nearer to the start of the study. The significance of these organisms is that they are potentially more resistant to disinfectants. Incidences of these organisms were not sustained over the course of the study (attributable to the efficacy of both agents, where KLRQ will have been effective against vegetative organisms and KSLRP against spores).

This article has discussed an important, but sometimes overlooked, aspect of disinfectant qualification: the field trial. While overlooked, the completion of the field trial is a regulatory expectation and this article has outlined a field trial case study, evaluating two disinfectants supplied by Ecolab disinfectants (Klercide Sporicidal Low LesiduePeroxide and Klercide Low Lesidue Quat). The outcome of the field trial was that the disinfectants were efficacious, and the rotational pattern selected was suitable. The data additionally showed how microbial counts reduced through the contamination cascade, lowering from grade D to A. This variation is not something that can be detected from laboratory testing, adding further weight to the importance of conducting the field trial. In terms of disinfectant rotation, the occasional recovery of spore forming organisms demonstrated why the use of a sporicidal agent is important.

Ideally a disinfectant manufacturer will be able to provide some advice on the suitable contact times, concentration, and rotational frequencies. However, the field trial must be undertaken within the users’ own facility, as the final stage of disinfectant efficacy testing. The trial must be outlined in a protocol; discussed in a report; and put into place through completion of a change control and SOP updates. Importantly, should conditions change then consideration needs to be given to repeating the field trial.