Should technology based ARMMs be more widely adopted?

New technologies now exist that can reduce the time taken to detect viable particles by almost comical percentages, while also detecting and distinguishing inert ones. Therefore, it is puzzling why the uptake of ARMM devices in aseptic pharma manufacturing seems so slow

It is puzzling why the uptake of Alternative & Rapid Microbial Methods (ARMM) devices in aseptic pharma manufacturing seems so slow. New technologies inside alternative rapid solutions that distinguish and measure airborne particles that can be present (albeit it in minuscule quantities) in sensitive production environments (and not solely in the pharma sector) now exist that reduce the time taken to detect viable particles using traditional settle plates and incubation periods by almost comical percentages.

Equally important to a firm's productivity is the ability to reduce the time taken to verify the absence of particles and release a cleanroom back to production by a similarly astonishing percentage. And this detection technology, in the case of Laser-Induced Fluorescence (LIF), is not new and is readily available.

Measuring factors such as detection and validation time, whilst putting that in the context of quality and productivity equations for high-value products (e.g. drugs), provides such a staggering numerical comparison it sounds unrealistic. Real-time viable particle detection delivers commercial benefits in environmental and cleanroom control that include increased readiness, the avoidance of excessive sterilisation cycles and the ability to optimise air exchange rates.

Let's be conservative and say that ARMM devices using Laser-Induced Fluorescence technology take five minutes to detect an unwanted viable particle in the aseptic core (they don't – they typically take a matter of seconds) before raising a warning alert. The mathematics of five minutes versus four days represents a detection rate improvement of 115,200%. Perhaps that's an issue – it sounds too good. And while halting production is never an ideal scenario, the ability to do so rapidly in response to a true and reliable alarm has been known to save countless batches of expensive drug product going to waste while the contamination is verified.

LIF-based equipment, suitably deployed, can also be used to physically track down the location of the contamination source within a facility.

What is the technology?

Devices that use LIF technology for viable particle detection vary, but they all function on one simple founding principle that microbial particles fluoresce under certain wavelengths of laser light. Microorganisms such as bacteria, mould and yeast contain fluorescent molecules that absorb and re-emit light in specific ways at a different wavelength. Inert or non-viable particles may be fluorescent but often with different wavelength characteristics.

In standard particle counters, all particles scatter the laser light, allowing quantitative measurements to be taken. That's equally critical in many sectors as even inert particles are undesirable, including of course within aseptic pharma manufacturing, but Laser-Induced Fluorescence enables particle count information to be divided into two categories: non-viable and viable particles.

ARMMs have been understood, accepted and encouraged by regulatory authorities

Some instruments use more than one wavelength of light to provide extra data on detected viable particles for better discrimination. For instance, the BioTrak Particle Counter instrument from TSI deploys two different wavelengths of laser light (dual-channel LIF) and therefore detects emissions in two distinct wavelength bands. Particles containing fluorescent components (microorganisms) emit light at a wavelength higher than the incident laser light that excites them. The viable or non-viable (inert) status of a particle is immediately determined by its fluorescent properties and by its size, which is measured simultaneously by the light-scattering measurement technology.

A LIF device like BioTrak draws in air from the cleanroom environment and passes it first through an Airborne Particle Counter (APC) sensor and then through the dual-channel LIF sensors (for inert and viable particle detection respectively) and on through a gelatin filter (to collect particles for identification purposes). Viable particles are discriminated from non-viable particles in real time based on the APC-measured particle size and LIF-measured fluorescent characteristics. This delivers a total particle count and a separate viable particle count.

The point of using technology such as Laser Induced Fluorescence is two-fold: to alert production the moment a viable particle is detected, thereby potentially saving batches of expensive product and a correspondingly large amount of money; and to quickly establish that a cleanroom, isolator, RABS or other aseptic facility is free of viable particles and thereby able to resume operations, usually returning a facility within hours or even minutes once a contamination source is located and rectified. So that too is a valuable productivity bonus. 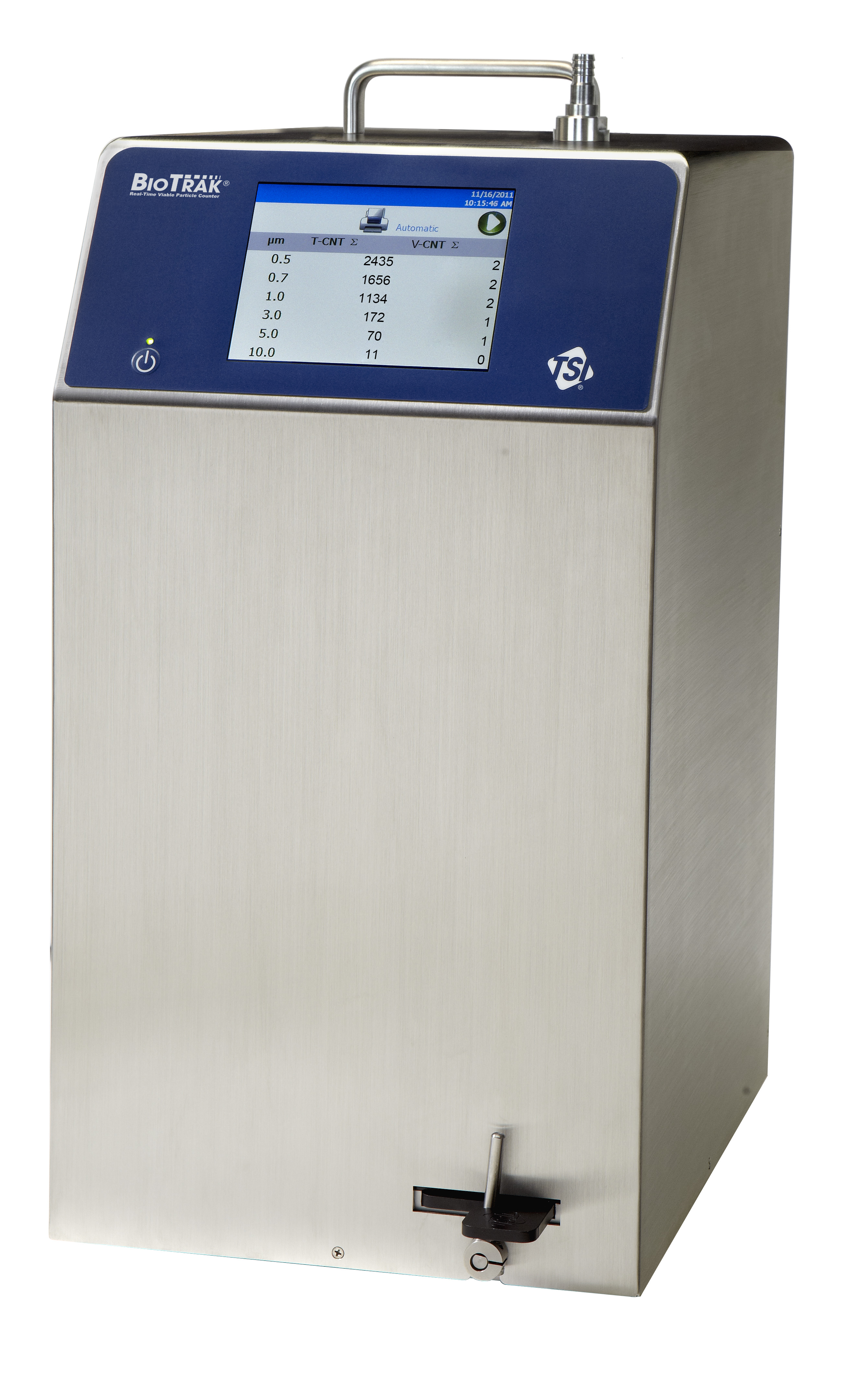 LIF devices offer additional information to that provided by the compendial culture/growth-based media in aseptic manufacturing. That's needed to identify the particle, once it has been detected. But to wait typically four days with an expensive aseptic facility offline could be a thing of the past. LIF devices can detect the presence of threatening viable particles in seconds – essentially immediately they arrive at the device's sensor. So the time difference between being able to confirm the presence of particles that demand production be halted while the source of contamination is located using LIF technology, compared to the four-day cycle for growth methods, is colossal.

The LIF identification process is the quantitative (and rapid) part that physically detects the presence of a viable particle but does not identify its type; that is still typically the preserve of growth-based methods. The differences between microbial species are too subtle to identify in real time, which is why some LIF-based ARMM instruments, including BioTrak, also feature a collection facility to harvest particles that can then be incubated for identification (Colony Forming Unit counting is not possible), which is the qualitative part of the process. But as pharma manufacturers know, that process can take days.

Laser Induced Fluorescence delivers another advantage in the presence of Viable but Non-Culturable particles (VBNCs) in that it can detect a substantial proportion of certain stressed microbes (a type of VBNC) as viable particles. It detects VBNCs more sensitively than growth-based methods, given that detection is not dependant on metabolic status.

However, where sample collection for qualitative analysis is desired or required, LIF devices often include growth-based collection facilities such as an integrated gelatin filters.

A primary objective of a LIF-based instrument is to help eliminate any need for human intervention in the aseptic core whatsoever. It delivers real-time information on viable levels automatically, without needing to engage an operator. The fact that these devices sample air from within the core but are normally physically located outside that space is convenient. But irrespective of its location, obtaining critical data about microbial contamination does not break the isolator or RABS.

That's in stark contrast to traditional agar settle plate changes, where human intervention is invariably required and, by definition to some degree, compromises the integrity of the environment and defeats one of the primary purposes of isolators – to exclude human operators. The European Commission GMP Annex 1 states that "[Microbiological] sampling methods used in operation should not interfere with zone protection."

Regulatory authorities are encouraging manufacturers to consider ARMMs and positively support improving quality through the uptake of technology such as Laser-Induced Fluorescence in the context of Quality by Design (QbD) initiatives. It's clear that the implementation of new techniques to improve quality is not only welcomed but expected.

As such, the adoption of alternative technological solutions helps to streamline the inclusion of LIF equipment into aseptic environments thanks to several years of experience in implementing the process: a PDA Technical Report (No.33 revised) dating back to 2013 states that "ARMMs have been understood, accepted and encouraged by regulatory authorities."

Several practical guidance documents and regulations have been published that aid and actively encourage the use of ARMMs, including USP <1123> (Validation of Alternative Microbiological Methods) and USP <1116>. The former of these provides "Guidance on the selection and implementation of assay methodologies to serve as alternatives to compendial microbiological methods."

The document describes the steps required to evaluate alternative methods and select the analytical technology, and ultimately advises on how to qualify the method with actual product. It also covers 'Types of Microbiological Tests' that apply to alternative methods, notably, as it points out by way of an example, the "variety of technologies available to detect the presence of viable cells."

Given these tangible quality, productivity and commercial benefits, as a supplier of a range of airborne particle counting solutions and contamination control expertise, it is surprising that LIF-based Alternative & Rapid Microbial Methods technology for real-time viable particle detection is not more widely adopted and implemented across the industry than is currently the case.