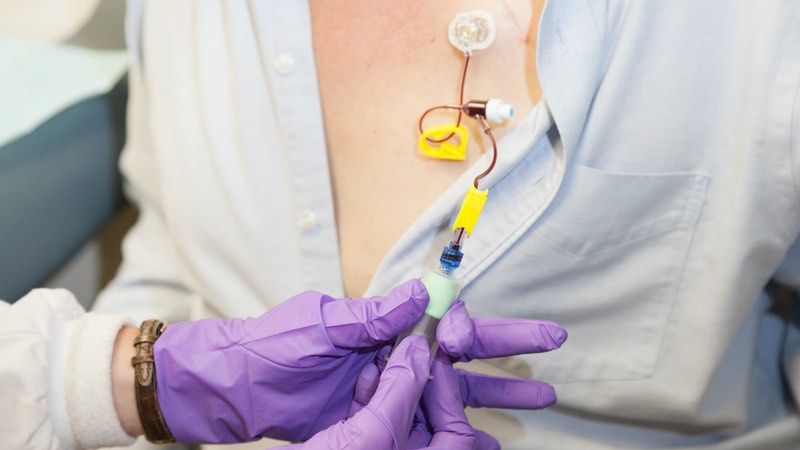 The quality of gloves for applications like handling chemotherapeutics is critical to operator safety. So testing this quality is something that any reputable manufacturer will prioritise. For Ansell, this resulted in 'Ansell's Cytostatic Permeation Program', or ACPP.

"Ansell's Cytostatic Permeation Program (ACPP) is an innovative method to assess, as close as possible, the permeation of chemotherapy drugs in a dynamic test model which mimics a real-life scenario," Eric Boeckmans explains. "This in-use perspective has very low levels of permeation detection which helps the user select the right glove for safer handling of chemotherapy drugs."

Boeckmans is Sr. Director Project Management, Training and Tech. Services, Medical and Life Sciences at Ansell and has decades of experience on the matter of cytotoxic permeation.

"Chemotherapy is used as one of the leading treatment techniques, together with surgery and radiotherapy, to help cure cancer," the permeation expert explains. "On the less positive side, regular and continuous exposure to some chemotherapy drugs could also induce side effects like headaches, irritation of eyes/skin, hair loss, dizziness and genetic damages potentially leading to infertility, cancer and miscarriages. Hence, the less exposure, the better."

Dramatic breakages are an obvious concern, but insidious consequences can also come from regular smaller exposures, which is why permeation is just as important to test as degradation and penetration. Boeckmans says that even at low quantities, genetic damage can be caused. "[Therefore] even though permeation is extremely difficult to detect, prevention is paramount and it is therefore key to follow the set safety procedures and guidelines strictly, based on real-life scenarios, like ACPP," he adds.

"This means, many people handling chemo drugs might face permeation and not even be aware of it. A good way to check if workers have been exposed is through urine testing," he says.

The ACPP picks up where Boeckmans thinks the regulations leave off. Looking at the ASTM and EN standards, these only recommend what is called a "static permeation cell". Boeckmans believes that having dynamic standards and a lower level of chemo permeation detection would help further improve workers' safety. He explains that the ACPP tests the permeation on a greater number of common chemotherapy drugs (27) than the standards deem necessary.

"When we detect a permeation we consider that "couple", aka that glove/chemotherapy drug combo shouldn't be used for that timing," Boeckmans says. "Standards have a different approach, using thresholds. When a permeation is detected, it is acceptable provided that it sits below the threshold ((0.01 μg / (cm2; x min) for the ASTM - D6978)."

Boeckmans explains that the results of each "couple" test are so specific that they cannot be extrapolated to other gloves or molecules. It is this customised approach to each specific glove and unique chemotherapy molecule (ingredients, thickness, manufacturing process, physico-chemical characteristics, ...) that defines the safety of the ACPP approach. 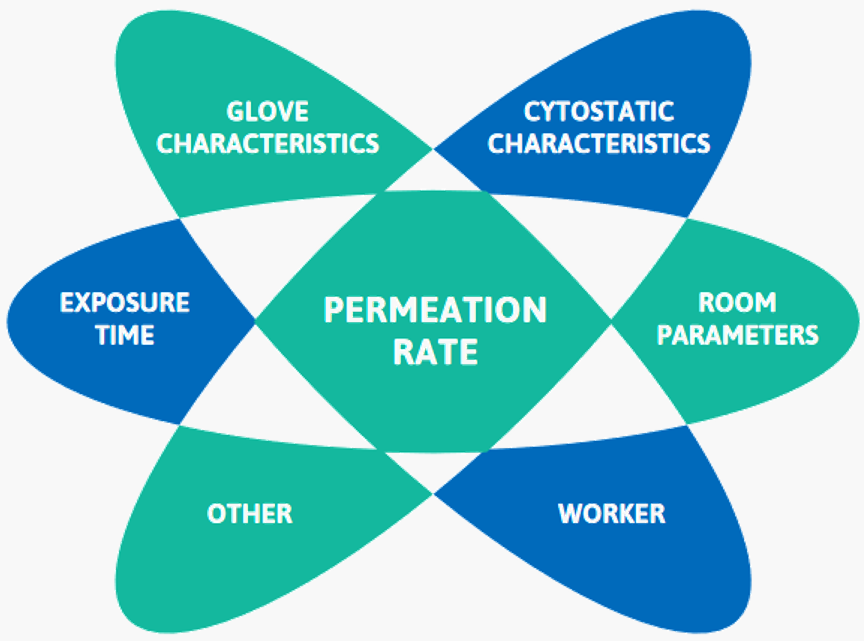 Looking more in-depth at static versus dynamic testing, it is clear to see why many take issue with the static approach. "During real usage, a glove is stretched in many directions, following movement of the hand many times over," Boeckmans says. He continues to explain that stretching means that the glove film thickness will be reduced and hence permeation will be more likely to occur. "Even the most demanding standard, ASTM D6978, considers that the hand will stay static during use," he says. "Which means it doesn't consider that glove stretching will reduce the glove thickness, leading to a correlated risk of increased chemotherapy permeation."

So putting these words into practice, Boeckmans discusses the method for this testing and its reasonings.

The ACPP methodology can be broken down into two main steps.

The first step is the dynamic permeation assessment which is performed on a unique and proprietary device called ADTD (Ansell Dynamic Testing Device) that has been designed and developed by Professor Pierre Wallemacq, Head of the Department of Laboratory Medicine of the Univ Hospital St Luc, Brussels, Belgium, Dr Bertrand Favier, PharmD, PhD, Radiopharmacist, Centre Léon Bérard, Lyon France and Ansell (Boeckmans himself).

These are papers that took a lot of work and collaboration. "In order to be as precise as possible, we decided to work with the most precise methods of detection," Boeckmans explains. "During the first set of testing and the publication of the first article in the American Journal of Health System Pharmacy (Permeability of 13 different gloves to 13 cytotoxic agents under controlled dynamic conditions) we used LCMS/MS (Liquid Chromatography in tandem with Mass Spectrometry) and HPLC-DAD (High Performance Liquid Chromatography in tandem with Diode-Array Detection."

"For the second publication that took place in Aug 2020 (Permeation measurement of 27 chemotherapy drugs after simulated dynamic testing on 15 surgical and examination gloves: A knowledge update - Journal of Oncology Pharmacy Practice) we used more or less the same technologies but with a higher level of detection that were available at the laboratory of Professor Jérôme Guitton, Head of the Pharma-Toxicology Department, Hospices Civils de Lyon, France.

"This analytical approach allowed Ansell to be circa 91 to 9100 more precise / below ASTM 6978 threshold," Boeckmans adds with pride. 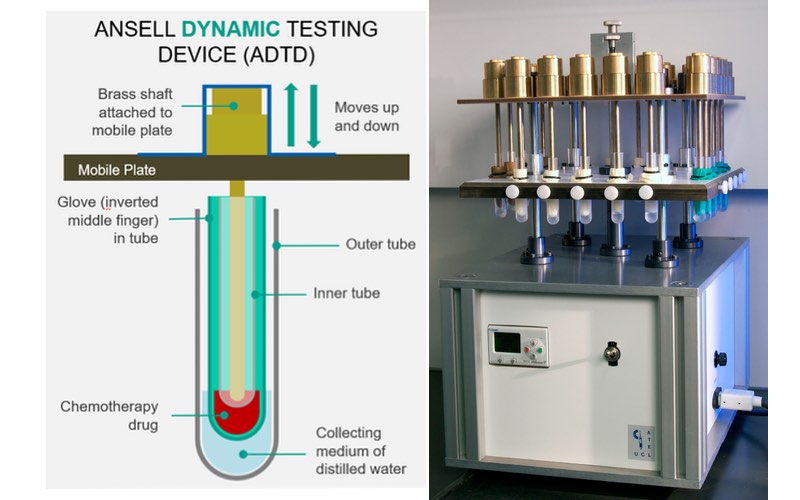 The conditions surrounding these tests are another highly important factor. Reflecting once again on the standards and guidelines, the American Society for Hospital Pharmacists' 'Guidelines on Handling Hazardous Drugs', claims a maximum exposure time for the same pair of gloves to be 30 mins. Boeckmans explains that this is reinforced by other professional societies and other testing being conducted. "A very good example is the testing lead by Dr Bertrand Favier, where one operator was doing a preparation of Cyclophosphamide," he says. "Despite the operators being highly trained, 49% of them were contaminated after only one reconstitution [of the drug]."

Hence, following the principle of precaution, especially with regards to the hazard represented by the molecules handled, Boeckmans and the team decided to limit their recommendation to a maximum of 30 minutes exposure time. However, the ACPP testing aims to provide a more complete picture of the permeations, so the programme always retests at shorter time frames (30 ⇨ 15 ⇨ 10 ⇨ 5 min)."Therefore our recommendation will be the timing where no permeation, even extremely low, is detected," he explains

Permeation is a very complex phenomenon that is definitely multifactorial

Continuing their pattern of attempting to recreate real conditions as closely as possible, Boeckmans and Ansell also consider the temperature of the testing conditions. "We know that permeation can be increased by temperature as it influences particles' kinetic energy and vibration," Boeckmans explains. "With body temperature being close to 37°C, we decided to challenge permeation at that temperature using a water bath." 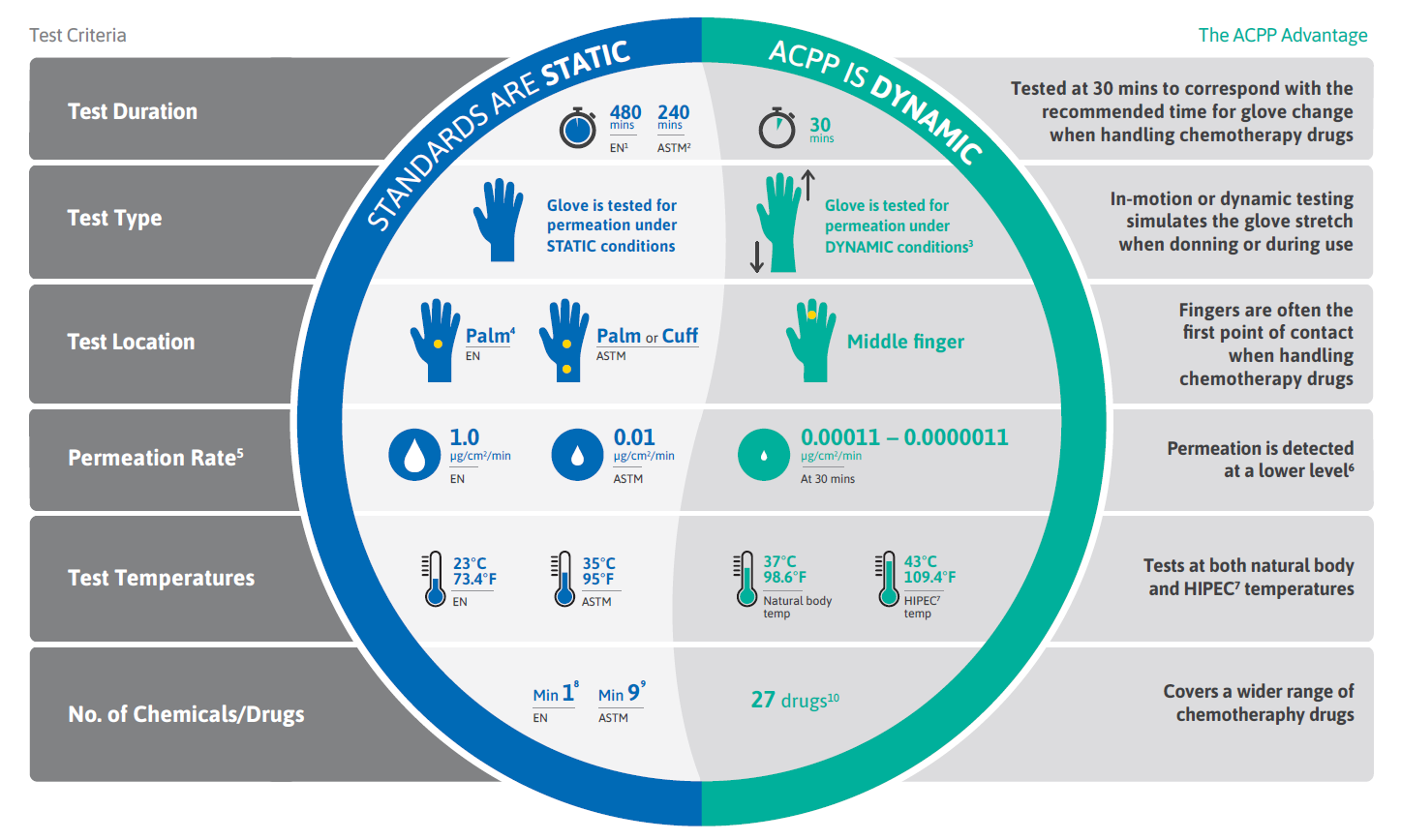 In case of emergency

Permeation is a very complex phenomenon that is definitely multifactorial. Boeckmans explains that it can be driven, in the case of gloves, by the glove thickness, the glove ingredients, the chemotherapy molecule physico-chemical characteristics, the time, the environment (temperature, pressure, humidity, ...). and many more factors influencing, positively or negatively the permeation process.

Unsurprisingly, the movements incurred by the operator make an impact too, and an interesting discovery of ACPP was that permeation occurrence is far greater in "examination usage", as opposed to surgical and life science uses. "This seems to be driven by an excipient called polysorbate 80 that could cause glove breakage or more precisely nitrile glove breakage, and is in fact, one of the conclusions of the 2020 article," the permeation expert explains. "But this excipient doesn't seem to have any impact on the other gloves materials that are mainly used for surgical gloves like NRL, polychloroprene or polyisoprene."

This perfectly demonstrates why testing to your unique circumstances is so critical.

At the end of the day, safety is the most important thing. "Ansell strives to provide the best safety advice, and after realising that the current standards were not adapted to the real risk faced by the workers, we decided to invent a device allowing us to mimic permeation as close as possible to what happens in the reality," he says. "Making sure that workers are as well protected as possible and safe in their work environment is Ansell's priority. The reason why we have decided to invest in such an innovative and pertinent programme is to ensure that workers can feel confident that they are receiving the best advice on protection."