An eco-friendly solution to microbial contamination

The world-first 100% mineral antimicrobial technology is the brainchild of Pylote, the French chemistry specialist. The breakthrough delivers an effective answer to the prevention of surface microbial contamination that is good for the environment

Despite the respect of requirements for minimising microbial contamination in pharmaceutical cleanrooms outlined in regulatory documents published in Europe and the US for the manufacture of sterile medicinal products —and the implementation of extremely strict hygiene measures— the risk of bioburden is still present.

Between 2004 and 2011, there were 1,734 drugs recall entries in the FDA Enforcement Reports; 642 (37%) were recalled due to microbial contamination and among them, 36 were Class I, those with the greatest likelihood of causing patient harm.

We are all well aware that contaminated environments can lead to expensive shutdowns and increased production costs as well as product recalls, regulatory observations, fines, and even patient deaths.

Let's remember Baxter's January 2017 case; the US healthcare company had to pay the federal government $18.2 million to resolve criminal and civil liability arising from its failure to follow proper federal standards when manufacturing sterile drug products between 2011 and 2012 at a factory in Marion, North Carolina.

A whistleblower at Baxter told federal authorities that mould was present on air filters that were supposed to ensure sterility in the room during the production of sterile intravenous drug solutions. Despite this discovery, the company continued to manufacture drugs in the cleanroom for several months, the US Department of Justice reported.

Robust processes that assure product quality, especially in terms of bioburden and contamination control are key; otherwise, the cost to a manufacturer for a contamination event can run to 20-30% of total sales. 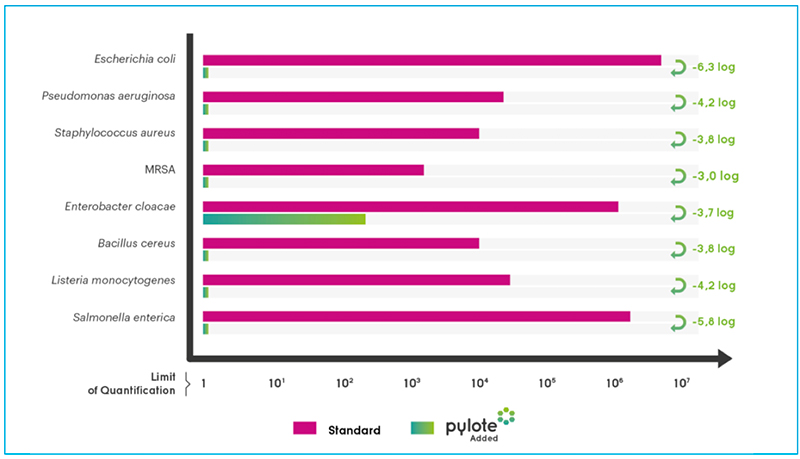 There are four main sources of microbial contamination in cleanrooms and hospitals: people, surfaces and equipment, room air and room water (where applicable).

Although humans are the main source, the contamination risk brought by the inert surfaces is not negligible. For example, in pharmaceutical cleanrooms, floor and walls surfaces are considered as high cross-contamination sources. Indeed, microorganisms on these surfaces are dispersed into the air and then transferred to the product.

In food industries, some disease outbreaks were subsequently found to be due to cross-contamination of products after contact with contaminated food-processing surfaces or equipment. In hospitals, surfaces may be contaminated from healthcare workers’ hands or by direct patient shedding of microorganisms in the immediate environment of a patient’s bed. Because of a number of microorganisms’ ability to persist and survive for a long-term period on dry surfaces, particularly in healthcare settings, surfaces are therefore considered as the main vectors responsible for hospital-based infections.

Given the involvement of surfaces in microbial contamination, worsened by the development of microbial resistance to antibiotics and disinfectants, the use of antimicrobial surfaces appeared very helpful to improve the management of bioburden in many fields, including health, food and industry. In this context, Pylote, a French company committed to green chemistry in the mineral and ceramic chemical sector, has developed and industrialised a 100% mineral antimicrobial technology.

Headquartered in Drémil-Lafage, a commune located about 15 mins from Toulouse, Pylote says it offers an effective answer to the prevention of surface microbial contamination; the company claims it is the world-first.

Chemical disinfection is the most recognised hygiene measure for preventing the spread of microbial contaminants. However, the emergence of antibiotic-resistant bacteria, and the ability of microorganisms to be less sensitive under biofilm, led to the development of antimicrobial surfaces with the objective of obtaining inhibition growth, killing and also performing anti-adherent and/or anti-biofilm activities.

Several types of bacteriostatic surfaces designed to prevent the adhesion of microorganisms have been developed, in particular by making the surfaces superhydrophobic. These properties can be obtained by plasma surface treatments or by nanostructuring. Even if these techniques are effective, they do not seem applicable to large areas and they are unsustainable over time due to fast degradation of surface chemistry.

Triclosan is an antibacterial agent used in a wide variety of domestic products, but it as an endocrine disruptor and potential carcinogen

Numerous assays concerning the adsorption, coating or covalent link of antibiotics, such as cefepime on surfaces, have been performed, but this way is being considered a misuse given the increased risk of antibiotic resistance emergence, as indicated in the United States national antimicrobial resistance monitoring system (NARMS) integrated report.

Another way uses Triclosan impregnated or incorporated in polymers. Numerous products have been manufactured including cutting boards, food boxes and floors. Triclosan is an antibacterial agent used in a wide variety of domestic products, but the scientific community now denounces it as an endocrine disruptor and potential carcinogen.

Among other antimicrobial molecules, metallic cations and metal oxides have been suggested in form of coatings, grafted or integrated as nanoparticles such as:

Considering the ability of microbes to adhere, survive and grow on surfaces, and because the goal is to reduce biocide use and release while limiting human and environmental contact, the second solution looks promising. 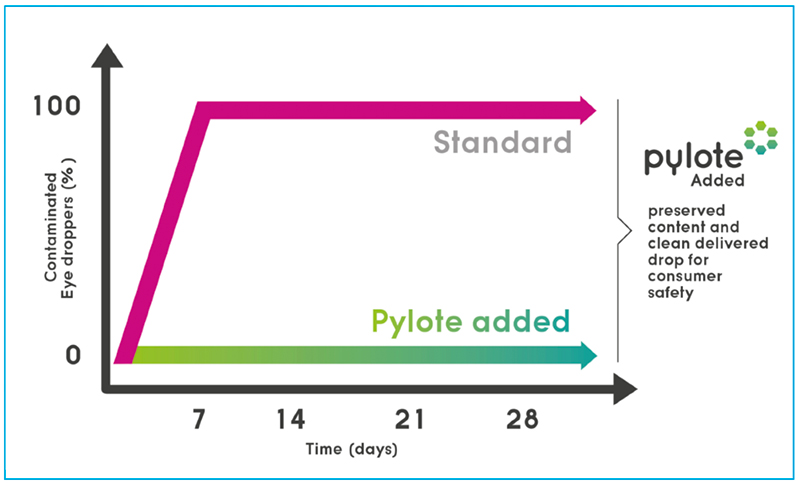 Pylote is developing, producing and marketing an innovative technology based on an exclusive green chemistry manufacturing process to create 100% mineral microspheres. The technology has been approved by the Cosmetic Organic and Natural Standard and complies with European, United States, Brazilian and Japanese pharmacopoeia and Commission Regulation (EU) No 10/2011 on food contact materials.

The 100% mineral composition, size (non-nano), structure and density of these microspheres are perfectly controlled, and as a result, they generate antimicrobial properties to the materials into which they are integrated without altering the manufacturing process. Once they have been integrated, microspheres do not migrate and their efficacy is thus entirely consistent over time.

The antimicrobial activity of microspheres is linked to the production of reactive species —mainly hydroxyl radicals— on the particle surface, causing plasmid membrane disorganisation by direct contact.

Pylote technology has been evaluated by independent certified laboratories using the Japanese International Standard (JIS) Z 280118 and its counterpart, ISO 22196. The technology has a significant impact on a wide variety of microorganisms, including bacteria expressing acquired antibiotic resistance such as Methicillin-resistant Staphylococcus aureus (MRSA), and viruses.

The new technology was tested against the most common germs involved in nosocomial and foodborne infections.

After a 24-hour incubation in conditions that sustained the viability of bacteria, the innovation offered by Pylote totally eradicated the microbial population deposited on plastic surfaces (no bacteria harvested), and thus reduced the related risks.

In addition, the antimicrobial activity of the Pylote-added surfaces is fully maintained regardless of storage conditions and for at least four years, and also after repeated exposition to codetergents-disinfectants commonly used in health establishments.

Microspheres have been successfully integrated into many materials such as plastic, rubber, elastomer, silicone, coating (paint, spray, ink) by conventional mixing/compounding/converting processes. This allows for many applications in hygienically controlled environments such as walls, floors, soap dispensers, switches, conveyor, etc. Pylote technology can, therefore, be used in addition to hygiene measures already in place to obtain optimal microbial control in cleanrooms.

The risk of pathogen contamination of some products such as eye droppers, nasal sprays, cosmetic accessories and applicators is present during manufacturing processes but is greatly increased during consumer use.

Indeed, products can be directly contaminated by the hands or the treated parts of the body (skin, eyelashes, nostrils, etc).

There is also a risk of cross-contamination when several consumers, especially in a hospital environment or within the same family, share the same product.

Incorporated into all the plastic components (tip, cap and bottle) of a simple multi-dose eye dropper, Pylote technology demonstrated a full control of the microbial contamination risks inside the vial and on the delivered doses even after deliberately contaminating the tip several times a day for at least 28 days with the same microbial strains used in antimicrobial-effectiveness testing.

The dropper with standard packaging tested in parallel was completely contaminated from the seventh day.

In addition, Pylote has industrialised a unique green technology that, when integrated into surfaces or equipment, is extremely effective in reducing the risk of microbial contamination in pharmaceutical, cosmetic and food manufacturing cleanrooms.

In addition, directly integrated into primary packaging, this solution provides complete protection against microbial contamination of the formula and the consumer, not only during storage but, most importantly, throughout the period of use.

Moreover, in healthcare establishments, Pylote technology applied in inert surfaces and equipment such as bed rails, baseboards, and switches, could be very helpful in limiting cross-contamination and thus reduce the emergence of nosocomial infections.

Given that the microspheres are 100% mineral they do not contain any nanoparticles or toxic substances and there is no migration from the host material. Thus Pylote technology is safe for consumers and the environment.

This solution requires no change in the actual manufacturing process, thus it is highly suitable for many products with a high risk of microbial contamination during manufacturing and/or use such as eye droppers, nasal sprays, liquid sticks, respiratory masks, cosmetics and food products.