The importance of growth promotion testing

Given the critical nature of microbiological quality tests which are employed to ensure that pharmaceutical products are safe for human use, it is in turn essential to undertake quality control (QC) tests to ensure that the culture media being used for these is fit for purpose and performs properly. Cherwell Laboratories' Steven Brimble explains 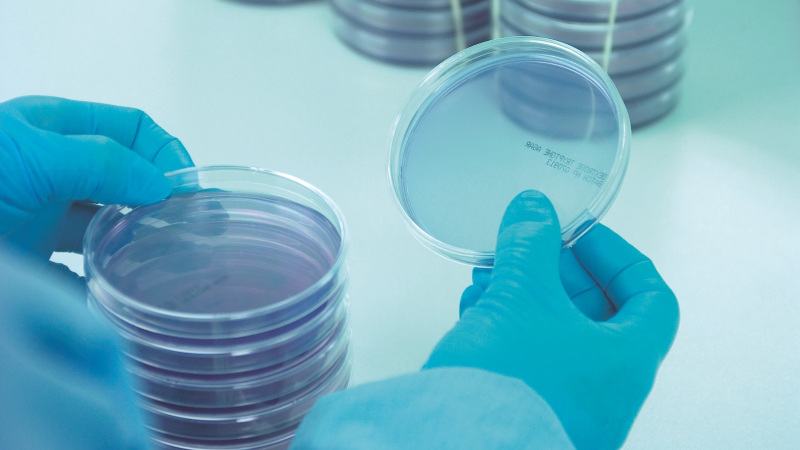 Before a new batch of culture media can be used for any microbiological tests, particularly under pharmaceutical industry regulations, it must be properly tested for its ability to ensure consistent and reliable results. Central to this is growth promotion testing (GPT), so what are some of the key points around this important test?

Culture media still lies at the core of most microbiological testing, even in the advent of rapid microbiological methods. Given the fact that media is essential to pharmaceutical quality control testing, including environmental monitoring (EM), sterility testing (ST), as well as process and operator validation, it is important that it is of good quality and performs properly.

A pre-requisite for any reliable microbiological work, as highlighted by ISO 11133:2014, is that culture media must meet established performance criteria to ensure accuracy of results, as so many key pharmaceutical QC tests and procedures depend on them. Therefore, sufficient testing should be carried out to demonstrate:

• The acceptability of each batch of medium

• The medium is "fit for purpose"

• The medium can produce consistent results

Just as contaminated media may produce false positive results, if media does not properly support organism growth, false negative results can also be obtained undermining the validity of any pharmacopoeial tests. Given the fact that in a sterile pharmaceutical environment the vast majority of microbiology assays should result in no growth, it must be demonstrated that the media used could support growth if microorganisms were present.

Regardless of whether it is purchased from an external supplier or manufactured in house, it is considered best practice to undertake in house growth promotion testing on all batches of prepared media before use.

GPT, which may also be known as nutritional adequacy testing, growth potential testing, fertility testing, or media challenge testing - is used in pharmaceutical QC testing to demonstrate that microbiological media can support the growth of key microorganisms. It is a relatively simple test, where the medium is challenged with a small number of microorganisms to assure its nutritive properties and to demonstrate that it enables organism growth, or in some cases inhibits growth of other organisms.

It should ideally be a quantitative test, even if semi-quantitative in the case of liquid media, whereby results are compared to a reference, for example a previous batch or a certified reference, to monitor any variability in performance.

The GPT is a mandated requirement of the European (Ph. Eur.), United States (USP) and Japanese (JP) Pharmacopoeias. These are harmonised for this test and can be found in the European Pharmacopoeia Chapters 2.6.1, 2.6.12 and 2.6.13. Its importance is also recognised by the World Health Organisation, as well as within harmonised GMP guidance and ISO 11133:2014.

GPT is an essential component of the supply of quality culture media used for key microbiology QC tests. This is due to the high consequences of final product failure in the pharmaceutical industry should an EM or ST programme fail to detect microbial contamination, not only to human health, but to the reputation and finances of pharmaceutical manufacturers.

Ultimately GPT provides assurance of the final results of pharmacopoeial microbiology testing programmes by showing that the media used will perform as expected against accepted criteria.

A reputable media supplier will undertake GPT to a high standard on all media that they produce to demonstrate its quality and consistency in performance prior to shipping. The media suppliers should also provide a Certificate of Analysis (CoA) for every lot of media supplied.

The CoA is a vital element of prepared media quality control, which not only confirm the GPT, but also include pH and sterility test results. However, a customer should consider wider risks and prove that the media they receive is fit for purpose and will support growth in their own environment. Hence, the expectation that they should also perform in house GPT for every new batch, whether it is bought in as ready-to-use media or a dehydrated culture medium used to make in house.

There are several reasons for this:

Impact of transport and storage - Even if a prepared media supplier undertakes good warehousing and distribution practice following their own QC testing, once a media batch has been dispatched, transport conditions such as temperature, cannot be guaranteed and may vary unless it is shipped under controlled conditions. This is particularly the case if the shipment of one lot of media from a supplier is split into multiple deliveries which could be under differing conditions.

In addition to the potential impact of transport conditions, a media user must also be able to demonstrate that their storage practices have not affected the media quality prior to its use. This is the case even if a supplier has itself undertaken studies to demonstrate that its media still performs despite being stored outside of the recommended conditions for a short time.

Specific environmental isolates - Prepared media suppliers will generally test for a standard group of bacterial and fungal species in line with pharmacopoeial recommendations for their growth promotion and sterility test procedures. However, it is also important that pharmaceutical manufacturers can demonstrate that they can detect microorganisms that may be found in their own production environment. For example, facility specific environmental isolates should be taken in case they have become resistant to disinfection procedures within that particular facility.

Validation and assessment methods - A manufacturer must show evidence of due diligence in the methods that they have adopted for their microbiology QC. Therefore, full documentation of methods and detail of all procedures undertaken are essential to verify that all media used will perform as required.

GPT methods should be validated to ensure that the media will cultivate low numbers of a standardised list of bacteria and fungi when incubated at the standard times and temperatures used by the end user for analysing their own EM samples.

Method suitability assessment is also necessary as part of a GPT procedure in order to verify that a sterility test medium is capable of supporting growth of the test microorganisms in the presence of test sample under the same conditions as for the GPT. A method suitability test should be performed when a sterility test is needed on a new product or when there is a change in experimental conditions of the test.

Just as suppliers of prepared media have stringent and documented procedures in place for their own GPT, so pharmaceutical manufacturers should also be able to demonstrate robust and validated in house methods to ensure regulatory compliance for the media that they use. Regulators, such as the MHRA in the UK, focus on risk mitigation and data integrity and so GPT is an absolutely vital element in supporting pharmaceutical production and positive release of finished products. 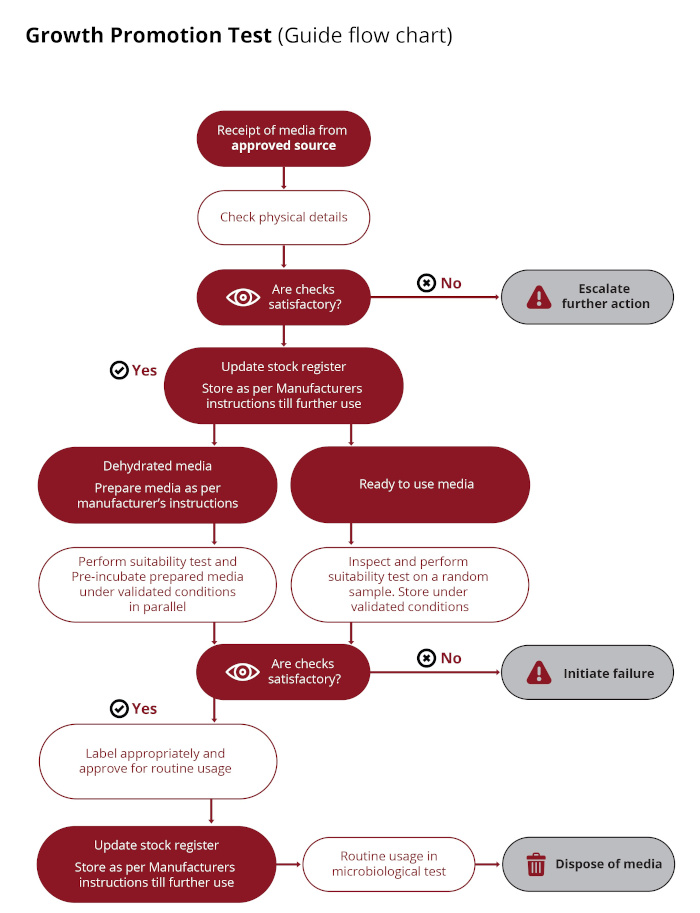 How is GPT performed?

GPT methodology will vary from site to site and should be defined depending on the individual requirements for media, which will be specific to the microbiological QC test being undertaken, the sample and organisms to be detected.

Furthermore, each individual organisation will have differing requirements regarding the breadth and depth of method validation. Validating methods is time consuming and costly, and the rationale for why they are undertaken in a certain way may need to be defended in internal and external audits.

In short, the GPT process around which organisations need to develop their own specific methodologies should begin from receipt of media, then storage, testing and approval for use or possible re-testing. The flow chart provides an overview of this process (Figure 1).

Following initial pre-tests to check labelling and physical appearance, the basic requirements for the GPT itself are summarised in Figure 2 and as follows:

1. The new batch of medium is inoculated with a small number of microorganisms (<100 Colony Forming Units (CFU).

2. The medium should be tested using microorganisms (no less than five unique strains) recommended by the pharmacopoeias. These should be no more than five passages removed from the original reference culture seed lot.

4. Acceptance criteria for the results and re-test regime must be clearly defined, with no more than a factor of 2 difference in productivity ratio calculations. 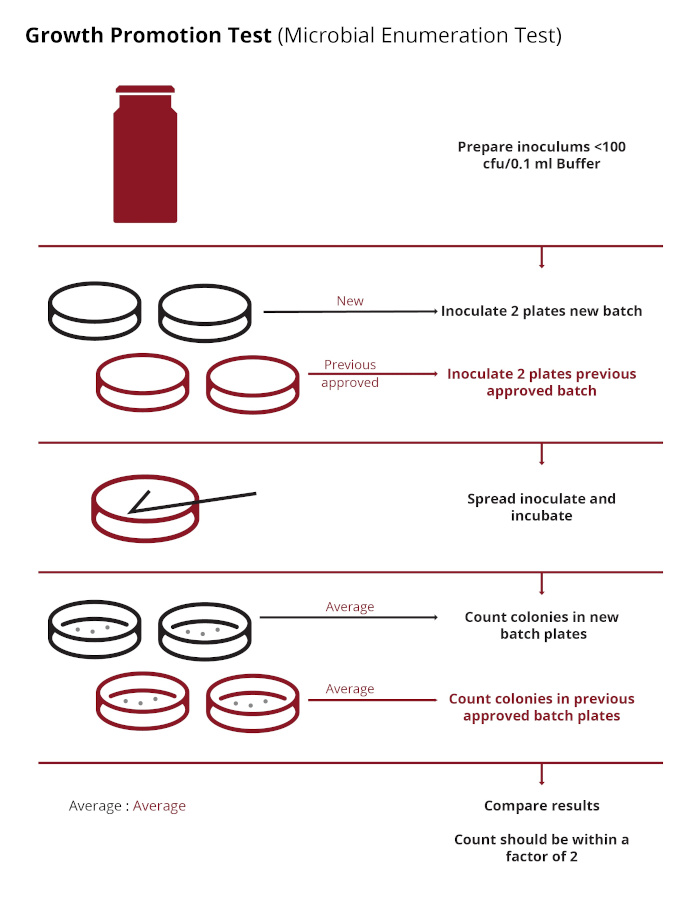 5. GPT results must be simply and clearly documented, and the batch physically labelled as passed or failed, and any failed batch securely quarantined until investigated. Ideally no more than one re-test should be undertaken.

For a GPT to be robust and effective, it must be guaranteed that the test is consistent and the results reproducible. This can be challenging, as there are many factors which must be considered, including:

• Changes in staff and retraining

• Ensuring purity of a strain before use

There are also a number of variables for maintaining accuracy and consistency within the actual GPT methodology. These include: testing multiple plates, pipetting techniques, agar condition, incubation conditions and colony counting methods.

Given the time-consuming nature of GPT, some smaller manufacturing facilities may consider contracting it out to a third-party laboratory. However, the same considerations as if the work were to be undertaken by the customer needs to be evaluated such as:

• Could transportation to site affect media quality and subsequent results?

• Has the methodology been audited and how do they control methods and standards?

• What they would use as the reference plate for batch-to-batch comparisons?

One major consideration involves choice of prepared media supplier and the level of expertise and support they can offer. A good supplier is one that has a proven track record, along with evident levels of expertise and capability.

The ability of a prepared media supplier to fully understand the testing requirements and specific applications for which its products are used, is crucial. This means that a supplier can help with the resolution of any issues surrounding GPT of its product, or better still, is happy to advise before they arise.