Standing at the precipice of retirement, the President of specialist furniture company BioFit looks back at his career and the importance of appropriate furniture in controlled environments. Written by Sophie Bullimore 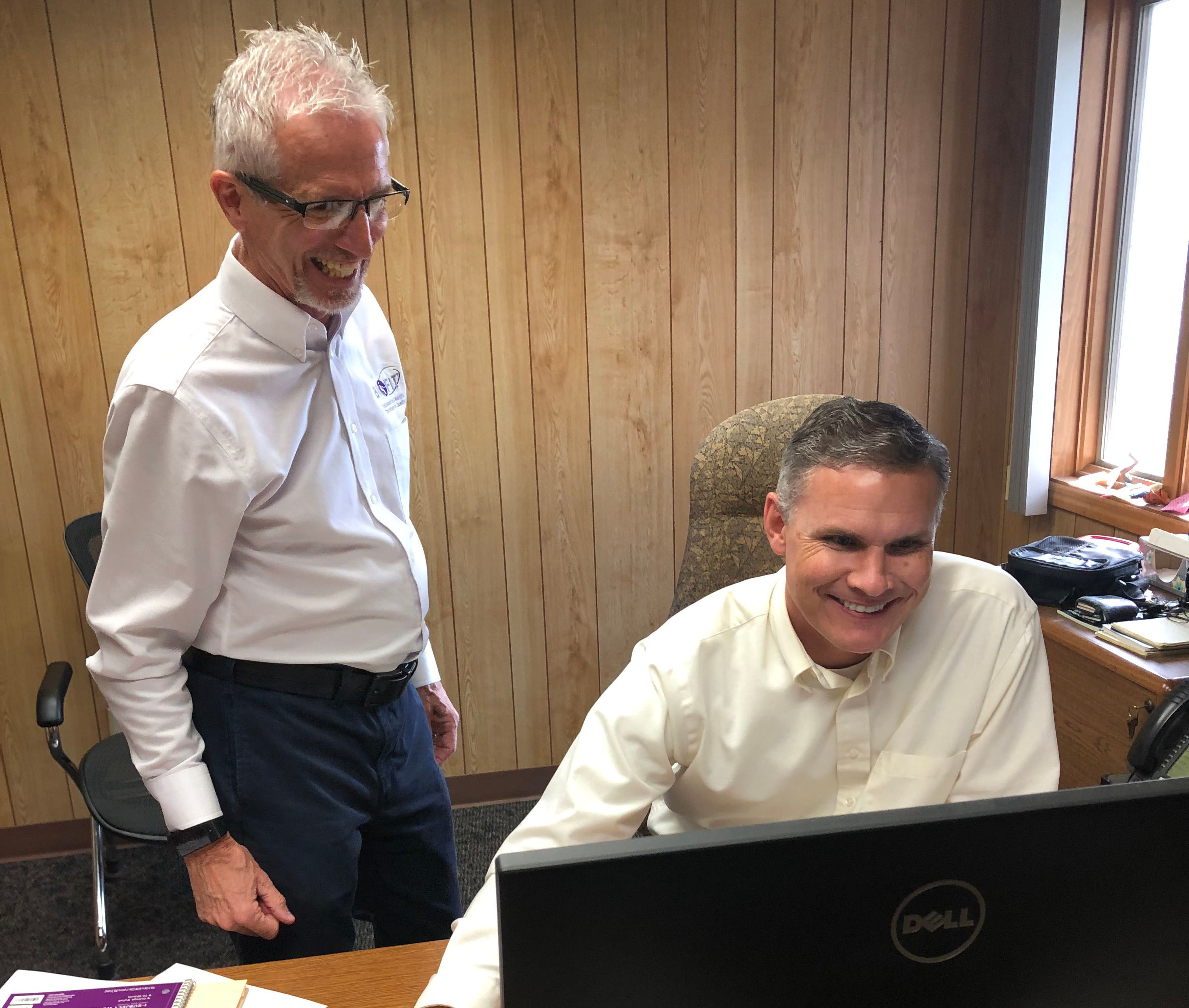 Looking back at Edward Metzger’s career, it is a story of loyalty and hard work. The President of specialist chair company, BioFit Engineered Products has been there for 28 years and is now planning his retirement. The company is highly regarded in cleanroom and ESD chairs, and the equipment provider is more focused on this section of its business than ever.

Metzger jokes that the start of his journey was ‘musical chairs’, making a pun on his early days as a music education specialist. “My undergraduate degree was in music education,” he explains. “I spent two years teaching choral and general music; one at a parochial school and the second at a public school. I used to joke when people asked me what my job was, responding that ‘I wave my arms in front of children for a living!!’”

It may then seem strange to try and understand how Metzger ended up in the furniture sector. “I drove past BioFit on my way to work each day while teaching and decided to stop in to see if they needed temporary help during the summer when school was out of session,” Metzger remembers.

The Bowling Green State University graduate then worked in the factory for two summers prior to being asked to stay on to fill a role in purchasing. Purchasing lead to Customer Service, which in turn lead to Sales Managements and then VP of Sales & Marketing. It was at this point that Metzger was asked to return to school for a business degree, the President at the time was eyeing retirement and there was interest in him as the replacement. “I was nervously willing to give it my best shot – it had been 27 years since I had been in undergraduate classes, and I admit to a bit of scholastic rust,” he says. “I’d like to say it was like riding a bicycle, but it wasn’t! Nonetheless, I was able to successfully complete the programme.”

The almost fairytale nature of Metzger’s ladder climbing career from summer job to company president means his daily duties changed considerably over the years. But he talks about how he tried to take things he learnt in each role and translate it into something useful for his next one. “The main point that was always solidly clear through these various positions was a willingness to satisfy customers and to solve their problems,” Metzger explains. “In purchasing that willingness led me to think of diverse ways to source materials for leading technologies, often needing to look outside the furniture world to find unique and innovative solutions. In the sales and marketing arena, I was able to get out to visit with leading-edge manufacturers around the globe to assess their challenges and needs and bring those facts back to our engineering and R&D staff.”

Metzger’s militant mindset on communication is something that has set him apart from the crowd. “When I became known for doing what I said I was going to do, I became increasingly successful,” he says. Metzger talks about his time in customer service and sales, explaining that he has a digital alarm clock on his desk which he rarely uses anymore, but back then he would set it for when he told a customer he was going to call them with a response. “When I would call them at that exact time, they would be so surprised,” he explains.

Honing in on a sector

Metzger is in no small part a reason for the company’s focus on cleanroom and ESD furniture. “In the fields of cleanroom and ESD furniture, we have always been leaders and being in the middle of developing innovative solutions has been the main focus of what I do on a day-to-day basis whether that is in product development, strategy deployment or reacting to this pinball environment we now call the pandemic,” he says.

Biofit has very much rolled with the punches over the years, as Metzger explains what industries his controlled environments products received orders for. “In the very early days (1960s), most [orders] were coming from defence contractors and telecom industries. As the electronics and semiconductor industries started booming, we saw a lot of activity there, including the hard disk drive industry,” he says. “Today, we see a lot of activity in pharma, biotechnology, medical device, R&D (especially in the college and university sector) and medical areas.”

Talking about ultra-critical environments, Metzger is eager to discuss the development of the BioFit MVMT range as a key highlight of his time at BioFit. As a range designed specifically for static sensitive and particle- and microbe-controlled areas, this process was invaluable in teaching Metzger how these environments work and therefore what is important. “It was the first product development project we did with a seasoned design firm (Studio Fifield),” he explains. “We spent literally hours of time with users watching them work, listening to their issues and questioning them about their needs. The first visit was just to talk and observe, then subsequent visits (three more total with each firm) were to bring in prototypes to see if we were meeting their needs.”

As a result of the endless visits to cleanrooms, ESD areas and general laboratory environments, the team confirmed some things that they already knew, but learned a great deal about the ergonomics, postures, and movements required for these work areas. “This project taught us a great deal about product design and how dealing in technical environments impacts material and production choices from the very conception of a project,” he laments.

An increasing issue that Metzger noted to begin work on, and is now far more prevalent with the global pandemic, is the severe degradation of chair components caused by the use (sometimes overuse) of very strong and caustic cleaning/disinfecting agents. “Many of these cleaners have an adverse effect on structural metal and some plastic parts, as well as upholstery materials. This is resulting in the use of more resistant plastics in place of metal parts and more aesthetic covers which help isolate metal parts from contact with the cleaners.”

As the equipment provider, Metzger has had varying levels of interaction with users about the design of the chairs. “In general, we don’t get too involved unless there are specific needs the user must have. Sometimes this is simply requesting a different material for a caster due to a unique flooring situation but can at other times be requirements to assure certain elements are not present in the chair which could react to processes or materials being used in a specific facility.

Metzger has viewed technical work as one of his greatest challenges over the years. The ergonomic nightmare that is tall chairs and a forward-leaning work posture present a special type of problem.

“Work surfaces in technical environments are typically at a much higher height than office workstations,” Metzger explains. “This requires taller chairs and the use of footrings or footrests. Although a taller chair may not seem like a big issue, the problem becomes a considerable issue for workers who need ergonomic adjustments. Having a chair recline, tilt or adjust at a high height impacts the stability of the chair and can lead to dangerous tipping situations if not engineered into the product.”

As an example, Metzger says that the BioFit’s MVMT Pro chair has 13 different ergonomic adjustments, all of which put added instability in play at these high heights. “To counter these issues we engineered and tooled for a base with a stable width of 73 cm to meet stability requirements,” he says.

The second big ergonomic issue in technical workspaces that Metzger points out is the often forward-leaning posture, used in microscopy, pipetting, inspection, or assembly processes. “This puts tremendous stress on the neck, shoulders, lower back as well as limiting blood circulation to the lower legs,” he points out. “Ergonomic adjustments which help reduce these stresses include forward seat tilt, backrest height and depth adjustments, armrest adjustments, footrest adjustments and seat pan depth.”

However, there is so much more to designing a good technical chair than just the ergonomics. Metzger discusses concepts that are so obvious when he says them, but would not occur to the layperson. For example, as ESD chairs are built as a circuit to avoid electrostatic build up, “if one feature is taken away, the circuit is broken.” He says: “So on a chair we typically start at the bottom where BioFit includes five ESD casters AND a stainless steel drag cable. The cable is critically important as wheels pick up dirt as they roll across the floor and become insulated due to the layer of dirt on the wheels. Having the drag cable assures an ESD path in the event the casters get dirty.”

Upholstery can be a particularly tricky for controlled environments as so many of the conductive elements are not cleanroom compatible, such as carbon black, stainless steel fibres or carbon fibres. “This led us to co-develop the first cleanroom-compatible ESD upholstery that contained a carbon layer underneath the exposed top colour layer,” Metzer proudly states. “This development resulted in a static-dissipative material that kept the carbon layer sealed from the cleanroom environment."

For general cleanrooms, the focus remains on particle shedding. Different ISO Classes require different levels of control. These can vary from special coverings for seat bottoms in Class 8, to a a sealed breather bag (lung) system for the seat cushion in Class 3 and 4. The fascinating sealed breather bag makes sure all air expelled from the seat cushion is contained within this system.

Be sure to consider seated workspaces in your layout

To add to the difficulty, the team is environmentally conscious and makes sure to implement this in their material selection. “We use powder coating instead of solvent-based wet coatings to help reduce VOCs,” Metzger says. “We also use water-based adhesives which help as well. And we select top-tier components and quality materials to assure our chairs last a long time, avoiding premature replacement.”

For sourcing these special materials there has been a lot of disruption in the last few years due to the pandemic. Metzger explains that they are just now starting to see a return to normalcy and that his hope is that even after his retirement, the team can push these environmental initiatives forward.

Metzger’s final words of wisdom are for all those planning a cleanroom project and reflect his passion for the sector: “Be sure to consider seated workspaces in your layout. I can’t tell you the number of jobs I’ve worked with customers who had casework and workstations installed, then called me in to discuss seating. Often, the problem is that no space was considered for seated work, so workers were forced to stand all day because there was no knee space located under the workstation for seated work.”

So, in the words of a retiring President, do not forget him.